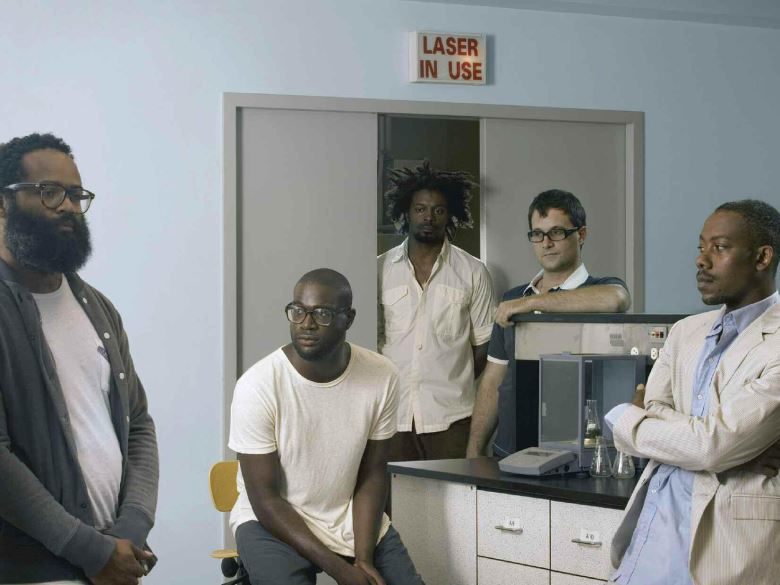 TV on the Radio are an American indie rock band formed in 2001 in Brooklyn, New York.
The group has released several EPs including their debut Young Liars (2003), and five studio albums: Desperate Youth, Blood Thirsty Babes (2004), Return to Cookie Mountain (2006), Dear Science (2008), Nine Types of Light (2011), and Seeds (2014).
For most of the band's existence, the core TV on the Radio lineup has been Tunde Adebimpe (vocals/loops), David Andrew Sitek (guitars/keyboards/loops), Kyp Malone (vocals/guitars/bass/loops), Jaleel Bunton (drums/vocals/loops/guitars) and Gerard Smith (bass/keyboards) as official members.
The band's Bio from their website:
TV on the Radio gets to do anything. Like a small platoon whose pleasing impenetrability is their core, the band consistently confounds expectations while managing to balance respect from critics and peers alike. The result is TV on the Radio gets to do anything they want. This freedom is their engine.

“It’s about doing what feels right,” says singer Tunde Adebimpe. “I really feel like this band is something that is expansive and always changing and growing. If we wear our influences on our sleeve, it’s a pretty crowded sleeve.”

It’s no different with Seeds, the new and fifth proper studio album that Adebimpe has made along with Jaleel Bunton, Kyp Malone, and David Andrew Sitek (who also produced it). Having long outlasted that early 2000s fascination with all things Brooklyn to which the hip willfully succumbed, they continue to conquer music on their own terms. This album serves as another step in continuing to heed their reputation as “the most vital, current band in America” (Associated Press).

This go-round the songs are immediate and triumphant, textured with storytelling hooks and possibly the most honest music this band has ever composed. They’ve hit a point where they’re OK being straight-up beautiful without having to manipulate prettiness into whatever unforeseen shape.

Slate says Seeds has “TV on the Radio’s best songs in years. They are sounding sharper than ever.” And the band knows it. Adebimpe has already said this is the band’s best record. Not a boast, just an observation.

“I feel like I knew it before we were done,” he says immediately. “I was so excited by the songs while we were making them, I wanted to get more and more and more into it. The general feeling going into it was, 'We're still here. Our friendship with each other is so strong. Being in a band, at its best times, is like being... well, let’s say whenever things are going really well, we're like ‘cool, Voltron's back together.’“

The TV on the Radio guys are the type of people who go on hiatus and focus on music. They may take time between albums for their other endeavors, but they know when it’s right to come together – especially when the music comes as easily and passionately as it did with case Seeds. The band found themselves collected in David Sitek’s Los Angeles studio last year and recorded a couple of songs – “Mercy” and “Million Miles” and didn’t want to stop.

“Those were just songs that we wrote because we hadn't written songs together in a while,” says Sitek “They came out really fast and inspired us to do it again – and then ‘again’ turned into the record.”

Adebimpe and Sitek live in Los Angeles, Bunton and Malone reside in New York, but make no mistake: TV on the Radio is a quartet. To attempt to parse out exactly what each member does in the group would be to dismantle the fundamental essence of what makes TV on the Radio the monolithic anomaly they have been careful to cultivate and protect for more than a decade. They permeate beyond a wall of sound, and instead create a planetarium of music with every song. They embody many voices. Most of them can play just about anything. And sing too. They are equal partners in the creation of a type of noise that appeared seemingly out of nowhere over 10 years ago.

Throughout the years, TV on the Radio has been consistent in the standard they set for themselves. Earlier records, Desperate Youth, Blood Thirsty Babes and Return To Cookie Mountain stole the hearts of fans and critics alike just the same, winning the Shortlist Music Prize and Spin's Album of the Year respectively. Their breakout release Dear Science was named best album of 2008 by Rolling Stone, The Guardian, Spin Magazine, The New York Times, The Onion AV Club, MTV, even Entertainment Weekly. An embarrassment of riches, really. Their last album, 2011's Nine Types of Light, was deemed "pure heaven" by the cherubs at Rolling Stone, and earned the band a Grammy® nomination. The band has also graced the stages of Saturday Night Live and The Colbert Report.

“The band is it’s own ‘self.’ It has to be that way,” Adebimpe says. “That's been the goal for a long time. Nobody really wants to be the focal point for the band; the band should be the focal point. Not even the band: the music. We can show up and take credit for it, but ultimately it's something that maybe we helped shape and facilitate coming into the world. But that’s all.”

They happily recruit likeminded associates to help prop up this invention of theirs in the studio and on stage. (Kelis, for instance, appears on “Lazzeray”). The band has recorded and performed with other artists who’ve conquered the music world on their own terms just as much as they have. Fellow mavericks like Trent Reznor, Nick Zinner of Yeah Yeah Yeahs fame, Bauhaus singer Peter Murphy, Kazu Makino of Blonde Redhead, Martin Perna of Antibalas, Katrina Ford of Celebration, and David chuffing Bowie have all romped in the sandbox with TV on the Radio.

Seeds is an expression of everything this band has been through in the last three years and more. They’re influential, in their prime, they’re TV on the Radio, and they’ve proven themselves to be one of the most important bands of this generation. It clicks, as it always does, and TV on the Radio is brand new again, again.

“No matter what you go through individually and collectively, when you step away from each other, you're kind of like, "I know that if we get together we can fire this thing," says Adebimpe. “It's definitely in the spirit of the punk rock we all grew up with. If you win, you're still a punk. If you lose, you're still a punk, and honestly, it's not about anybody else.”
http://www.tvontheradio.com/