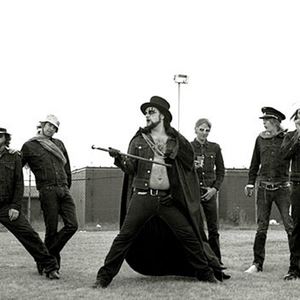 Turbonegro (known as Turboneger in Norway) is a Norwegian punk rock band from Oslo, formed in 1989. The band describes themselves as "death punk." The band started with Thomas Seltzer (the bassist, Happy-Tom as he is also called) setting up a band with some friends, called Akutt Innleggelse. They played some local concerts, and made an EP, including 3 songs, "CIA/KGB", "Supertstjerne" and "Lovesong", written by Thomas. The EP was named "Echoes From the Asylum". The cover art is a drawing of a skeleton, which Thomas found in his mothers book about the Scottish psychologist R.D Laing. The publisher was Straitjacket Records, also made by Thomas.
Thomas and a couple of friends started another band, now called "De Dype". Butthole Surfers, Sonic Youth, poop, Nietzsche and provocation was what they cared about. Their first concert was in the basement of Chateau Neuf, the Cirkus. They appeared drunk on-stage, none of the guitars were tuned, and they forgot the fuzzpedals, so the guitars sounded like violins. The point was to show the students at the party that they didn't give a fuck about them. The arrangers at last kicked them out.
Then, Turbonegro became a topic.
It wasn't worse than Pål Bøttger Kjærnes (Pål Pot Pamparius) screaming out aloud: "Hey, let's put a new band together! What shall the band name be?" Pål suggests Mindburger. Another suggests Nazipenis (which later ended up as a name of the band's tribute band). But suddenly Pål remembers a tag he had seen under a bridge in Finstad, Ski. Turboneger (Turbonegro in english). Founding member Thomas Seltzer once said, "A turbonegro is a large, well-equipped, armed black male in a fast car, out for vengeance. We are his prophets."
The six original Turbonegros were now: Thomas Seltzer, bass (Happy-Tom), Pål Bøttger Kjærnes, guitarist (Pål Pot Pamparius), Rune Grønn, guitarist (Rune Rebellion), Vegard Heskestad, guitarist, Pål Erik Carlin, vocals and Tor-Kristian Jenssen, drums (TK). Their first concert was in Copenhagen, Denmark, in 1989. They smoked pot, drank beer and watched adult movies. The concert became a success for them.
Some months after the success in Denmark, they decided to make a record, "Route Zero", including songs: "Route Zero" and "I Want You Right Now", a cover by MC5. (TK, the drummer, plays a solo on guitar on the MC5-song, and they see that TK is a far better guitarist than the other guitarists). For the cover art, they pick a picture from the cult-horror movie "Basket Case". The vinyl is pink. The band name is shorten to TRBNGR.
Later they made another record, the EP "Turboloid" with no success from the reviews.
Their final band consists of: Hans-Erik Dyvik Husby, vocals (Hank Von Helvete), Thomas Seltzer, bass (Happy-Tom), Rune Grønn, guitar (Rune Rebellion), Pål Bøttger Kjærnes, percussion & piano (Pål Pot Pamparius), Knut Schreiner, lead guitar (Euroboy) and Christer Engen, drums (Chris Summers).
Their fan club is called The Turbojugend. This first 'chapter' of the club began in St Pauli, Hamburg, Germany, with later chapters appearing throughout the world.
Following their "final" tour, in 1998 singer Hank Von Hell (Hank Von Helvete in Norwegian) underwent treatment for heroin dependency. The group disbanded, with Von Helvete returning to his childhood town in Lofoten in northern Norway where he worked at a radio station, Moskenes-radioen, where he soon became their entertainer. He also worked as a guide on a fishing museum.
In 2002 the members met to discuss possibly regrouping and touring. Following practice sessions they recorded their comeback album, "Scandinavian Leather", and followed this with an extensive worldwide tour.
In 2005 they recorded their follow-up album, Party Animals.
In 2007 they released their latest album entitled Retox [11th June 2007].
On July 9th 2010, it was announced in Norwegian newspapers that Hank has left the band. Bassist Happy-Tom says this is the end for Turbonegro as a band.
June 2011 Turbonegro have called upon old friend, legendary Londoner and former Dukes Of Nothing frontman Tony Sylvester to step in as their new vocalist. Sylvester performed his first show as a Turbonegro at the Turbojugend World Days in Hamburg, Germany on July 15th. It has also been stated that Turbonegro is currently working on their new upcoming album with Tony.
Albums:
Turboloid (EP)(1990)
Hot Cars and Spent Contraceptives (1992)
Helta Skelta (1993)
Never Is Forever (1994)
Ass Cobra (1996)
Apocalypse Dudes (1998)
Darkness Forever! (live) (1999)
Love It to Deathpunk - The life & Times of Turbonegro (2001)
Scandinavian Leather (2003)
Party Animals (2005)
Retox (2007)