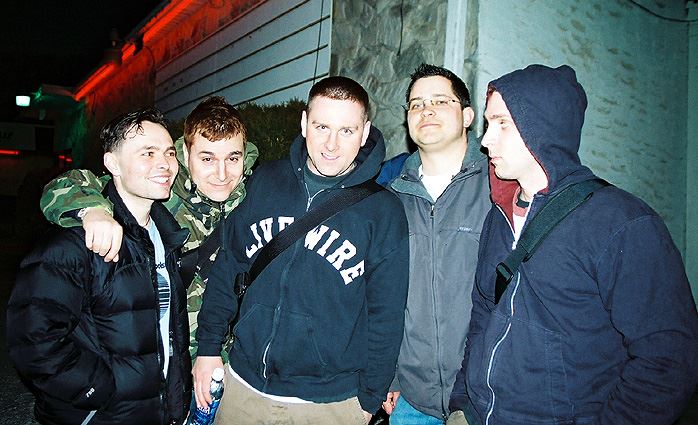 Two artist/groups use this alias-
1.
Summer 2004: Orange County California Straight Edge Hardcore legends Insted had a three-date east coast romp in the works, and invited long time friend Tim McMahon onto the New Jersey show bill to front whichever of his prior bands he chose (Mouthpiece, Hands Tied, Face The Enemy). Any of your bands, we want you on the show singing they told him. Quite a nice thing to hear for McMahon, who had caught Insted in his teenage years in '89 and '91 and no doubt had fond memories, especially those of Mouthpiece opening for the O.C. group at Trenton, New Jersey's City Gardens in 1991. Rounding up the Mouthpiece crew for a final reunion celebration would have not only been easy, but a sure-fire crowd pleaser involving minimal effort. However, the growing conceptualization of a new McMahon-fronted hardcore powerhouse with longtime sidekick Ed McKirdy (Hands Tied, The Killing Flame, Face The Enemy, Suppression Swing) on guitar duties had already been taking place. The subject of hours of discussion and analysis between the two already had a working name: Triple Threat.
The idea was simple and natural, yet its distinction laid within the details: straight edge hardcore rooted in the message and power of Minor Threat and Youth Of Today that also nodded in appreciation of bands whose sound McMahon and McKirdy had dissected through their youths though their influence were not blatantly felt. Black Flag, SSD, The Germs, Motörhead, Corrosion of Conformity, Circle Jerks, Bl'ast! and Danzig were just a few bands whose contributions had rubbed off heavily on the conceptualization of this new McMahon/McKirdy unit. Triple Threat was born quickly with a pinpointed direction.
With less than 2 months before the New Jersey Insted date, the decision was made to put into motion this new band. Drummer Jason Jammer (Mouthpiece), 2nd guitarist Aaron Chrietzberg (The First Step), and bassist Tim Kriependorf (Eyeball) shared the same vision for Triple Threat and were the logical decisions for completing the band. The songs that would comprise the A New Chapter EP came together quickly but with calculation, showcasing a well-crafted urgency full of both crushing power and chaos as well as structure and focus.
With their first few live shows under their belt, things moved quickly and didnt let up. The A New Chapter EP was recorded in August 2004 and released on both vinyl and enhanced cd formats in the early fall on Livewire Records. A take-no-excuses approach to playing out was set in stone early with a simple approach: play anywhere, with anyone, at anytime. This willingness to simply get in the van and do it has led to strings of dates up and down the east coast alongside the likes of Charge, Verse, Have Heart, Kill Your Idols, Vision, Ensign, The First Step, BOLD, Mental, Paint It Black, The Cryptkeeper Five and Underdog.
The full-length LP is out now and was released by Bridge 9 Records. Aaron is no longer part of the band and left prior to recording of the full-length
2.
ManVsMachine Inc.'s The One, MBZ, and N8 use the alias Triple Threat when they triple team tracks. Official ManVsMachine Inc. Website