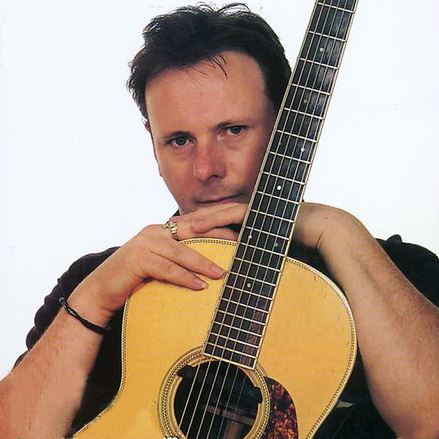 To find a unique voice on so ubiquitous an instrument as the acoustic guitar is quite an achievement: to do so within a centuries old idiom where the instrument has no real history is truly remarkable. In little over ten years as a professional musician Tony McManus has come to be recognised throughout the world as the leading guitarist in Celtic music. From early childhood his twin obsessions of traditional music and acoustic guitar have worked together to produce a startlingly original approach to this ancient art. In Tony’s hands the complex ornamentation normally associated with fiddles and pipes are accurately transferred to guitar in a way that preserves the integrity and emotional impact of the music.
Self taught from childhood, initially through listening to the family record collection, McManus abandoned academia in his twenties to pursue music full time. The session scene in Glasgow and Edinburgh provided the springboard for gigs around Scotland and a studio set for BBC Radio, frequently rebroadcast, began to spread the word.
With the loyal support of Greentrax Recordings in Scotland Tony’s first self titled recording in 1996, followed by Pourquoi Quebec in 1999 led to worldwide recognition. However, it was with the release of Ceol More in 2002 that Tony’s stature as a first class musician reached a new level. Having heard his session work on several albums Nashville based Compass Records released “Ceol More” in North America to universally ecstatic reviews. Critics hailed the focussed, spell-binding nature of the music, from the plaintive Jewish hymn “Shalom Aleichem” to the ingenious arrangement of the Charles Mingus tune “Goodbye Pork Pie Hat”. Having been nominated as Musician of the Year by both the BBC Folk Awards and The Scottish Traditional Music awards, in 2002 “Ceol More” hit the Critic’s Album of the year list in Acoustic Guitar magazine and named “Live Ireland Awards” Album of the Year.
In a relatively short time Tony’s music has come to define a new role for the guitar in Celtic music. He has come to represent Celtic music in the guitar world, making regular appearances at guitar specific events where just a few years ago jigs and reels would be unheard of. He is now invited annually to the Chet Atkins Festival in Nashville, has appeared at Guitar Festivals in Soave and Pescantina, Italy; Frankston, Australia; Issoudun, France; Kirkmichael, Scotland; Bath and Kent, England; Bochum and Osnabruck, Germany and has taught at five of Steve Kaufman’s Acoustic Kamps in Maryville, Tennessee. He recently appeared at the famous Ryman Auditorium in Nashville in the “All Star Guitar Night” featuring Steve Morse, Bryan Sutton, Muriel Anderson, Béla Fleck and Victor Wooten and headlined by the legendary Les Paul.
His ability to reach audiences unfamiliar with traditional music is remarkable- he is quite comfortable at predominantly classical events such as the Dundee and Derry Guitar Festivals (appearing six times between the two) and even The Bogotá International Guitar Festival where he followed virtuoso Eduardo Fernandez.
Today his live work ranges from intimate solo performance through various duos with friends Alain Genty, Bruce Molsky, and Alasdair Fraser to the quartet Men of Steel (with fellow guitarists Dan Crary, Beppe Gambetta and Don Ross). He is an enthusiastic collaborator both as a leader and as a sideman having worked with, among many others Dougie McLean, Phil Cunningham, Mairi MacInnes, Liam O’Flynn, Martin Simpson, Kevin Burke, Alison Brown, Martyn Bennett, Natalie MacMaster, Patrick and Jacky Molard, Mairead ní Mhoanaigh and Dermot Byrne, The Nashville Chamber Orchestra, John Jorgenson, Jean Michel Veillon, Catriona Macdonald, Seikou Keita, Xosé Manuel Budiño, Ewen Vernal and Andy Irvine.
He is also in great demand as a studio musician having contributed to over 60 albums. In addition to his solo output Tony has worked with both singers and instrumentalists providing his distinctive sound on many successful projects.
In recent years he has turned his hand to record production- Gordon Duncan’s amazing “Thunderstruck “ and Cathy-Ann Macphee’s reflective “Suil air Ais” (both on Greentrax) have both been hugely acclaimed for their arrangement ideas and McManus’s subtle touch. Whatever he’s called on to do, Tony provides empathy and imagination allowing the artist to shine.
Whether on a stage, recording in the studio or behind a mixing desk Tony McManus brings a deep respect for traditional music to bear on all he does. Wherever his journey takes him next it is sure to be an exciting ride.
POSTED FROM WWW.TONYMCMANUS.COM WITH PERMISSION