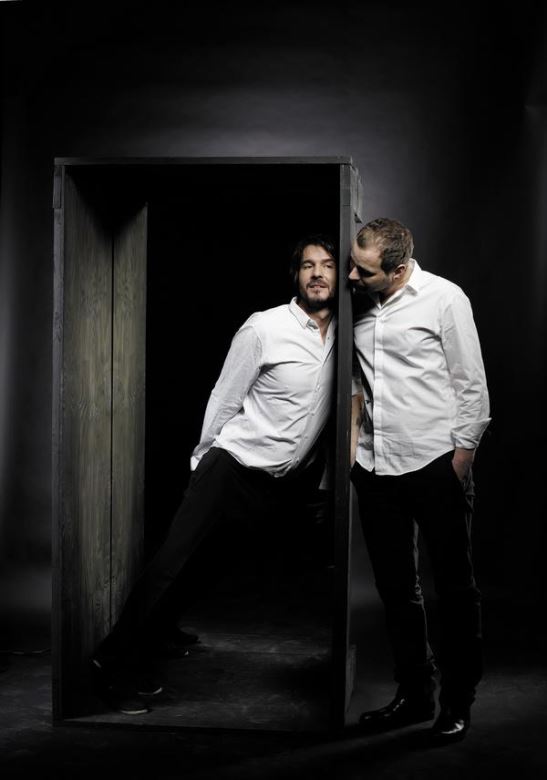 Tiefschwarz are a German electro house group formed by two brothers, Ali Schwarz and Basti Schwarz in 1996.
They performed deep house DJ sets in some of the biggest clubs in Germany and Switzerland as well as in major foreign cities and became increasingly popular in the house scene.
Full bio
Tiefschwarz was formed in 1996 by two brothers - Ali and Basti Schwarz - who have been successful DJs for over a decade. Peter Hoff, who runs the Benztown studios in Stuttgart, completes the Tiefschwarz production team. Ali and Basti came up with the name for their project after a DJ gig. Tiefschwarz, which is German for 'deep black', is a mixture of their last name, Schwarz, and their love for deep house.
In 1990 Ali opened the "on-u" club in Stuttgart, which became a pioneer of the German club scene. Three years later came the "red dog" club, which quickly became known throughout the world as a top address for deep house. Here, resident DJs Ali and Basti played alongside the likes of DJ greats such as Tony Humphries, Master At Work, Frankie Feliciano, Mike Dunn, Mousse T, Matthew Herbert, Lary Heard, Chris Coco, Matthias Heilbronn and many others.
Besides their work as resident DJs, Ali and Basti have been travelling together throughout Europe and overseas since 1995. They've played at countless major events and the most popular clubs in both Germany and Switzerland (Zürich, Geneva, Lausanne, Bern, Basle, etc.) as well as in major foreign cities, such as Miami (W.M.C.), New York, Washington, Melbourne, Sydney, Prague, Sarajevo, Amsterdam, Brussels, Antwerp, Rimini, Stockholm, London, Leeds, Sheffield, Ibiza, etc.
After six years of DJing and promoting, the two brothers began producing their own tracks. They co-founded the "continuemusics" label in 1996, on which their first single, "24 seven," with remixes by Boris Dlugosh and Michi Lange, was released along with four other tracks.
In 1998, Tiefschwarz signed a record deal with edel/benztown records. This proved to be a turning point in their career. Their first release, "music," featuring Joy Denalane of the hip-hop formation Freundeskreis, was not only a hit in Germany (9 weeks at No. 1 on the MTV Germany Dance Charts and No. 1 on Germany's Club Charts), but proved to be very successful in the UK as well. "music" was licensed to the famous "wave music" label in N.Y.C. run by François Kevokian and was remixed by Matthias Heilbronn.
Tiefschwarz have remixed around 30 tracks for artists such as Ultra Naté, Byron Stingily, Jam & Spoon, Jennifer Paige, Randy Crawford, Master At Work, Earth Wind and Fire, Shakatak, Mousse T., AWA band, Whirlpool prod., Sabrina Johnson and Sharon Philips.
The name Tiefschwarz stands high alongside other legendary German acts such as Boris Dlugosch, Mousse T., Knee Deep, Ian Pooley, Dixon, Jazzanova, Rainer Trüby, Ata and Vincenzo. As DJs, Tiefschwarz have gained a great reputation on the international house scene.
Their debut album, "ral 9005", is a skilled and smooth voyage through their daringly diverse cosmos of musical experience. As varied as their influences may be, Tiefschwarz never fail to integrate their own, undeniably unique sound. "ral 9005" covers the spectrum -- from the playful excursions into Nu Jazz (mars, fusion I, fusion II) and the soul-filled deep house and garage tracks (there is, you, never, city-sounds, music) to 80s beats (springtime), down beat electro (follow me), soundtrack-style pop (bye bye baby) and kicking club music (no more trouble, acid soul, sky diving). This is all polished off by an intricate and powerful production.
Their second album Eat Books includes the well known track Damage featuring Everything But The Girl vocalist Tracey Thorn