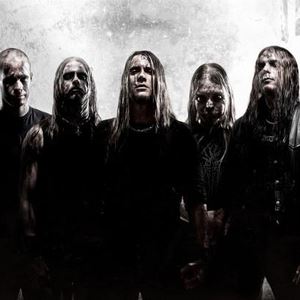 Thyrfing is a viking metal band from Sweden. The band is named after the royal sword Tyrfing from Norse mythology.
Thyrfing was formed in 1995 by Patrik Lindgren (guitar), Jocke Kristensson (drums), Peter Löf (keyboard) and Kimmy Sjölund (bass guitar). From the beginning, the band was meant to be a side project, as Patrik and Jocke put their main focus into their other band, Pantheon (not to be confused with the American National Socialist black metal band of the same name). Northern mythology and the Viking age was an interest of all the members, so the lyrics and the concept was focused upon this subject. The music was rather primitive and built upon slow pounding drums, heavy guitars and medieval synth-melodies. After two demo tapes that gained a lot of positive response in the underground scene, Thyrfing signed to the Dutch record label Hammerheart Records in 1997.
In Stockholm's Sunlight Studio in , their debut album was recorded, showing a much more varied songwriting. The album was then released in March 1998. For their second album, this time recorded in the Abyss Studios, their music took on a more symphonic approach, still keeping with the roots from the older material. For future live performances, Henke Svegsjö from Winds was recruited on guitar. He was regarded as a good choice, and nowadays he is considered a full-member of the band. Once again with Tommy Tägtgren, Urkraft was recorded and released in August 2000. During that same year, the band also held two mini-tours with Primordial and Shadowbreed throughout The Netherlands, Belgium and Germany.
In the autumn of 2001, the band entered Dug-Out Studio with well-known producer Daniel Bergstrand to record the most diverse and mature Thyrfing-album to date, Vansinnesvisor (English: Songs of Madness). The album was released in July the following year, masterly-packaged by Niklas Sundin, and was considered a big step forward for the band. With more experimental vocals, distinct and focused songs, odd instruments such as keyed fiddle and home-made percussion, and with a majority of Swedish lyrics, the band won new fans and rooted their position within the genre.
To support the album, Thyrfing played two support gigs during the winter (for Freedom Call and Dismember) in Stockholm, and did a small headliner tour in Benelux with Cruachan and Shadowbreed.
2003 followed with further live-promotion, such as the Generation Armageddon Festivals (including Ancient Rites, Septic Flesh, Primordial, Blood Red Throne and Skyfire), a 12-day European tour throughout Europe, and performances on the main festival stages of 2000 Decibel in Sweden and Wacken Open Air in Germany.
Thyrfing entered EMI studios on April 18, 2005 to record their new album, Farsotstider ("Times of Plague"), which was released on November 21, 2005.
The band played their first US show in January 2006 alongside Moonsorrow and Primordial at the Heathen Crusade metalfest in Columbia Heights, Minnesota.
On March 13, 2007, the band posted a message on the official Thyrfing-site declaring that Thomas Väänänen (vocals) and Henrik Svegsjö (guitars) had decided to leave the band due to lack of motivation. Instead of Thomas, founder and ex-vocalist of Naglfar, Jens Rydén, is currently handling the vocals. The band also decided to continue with one guitarist.