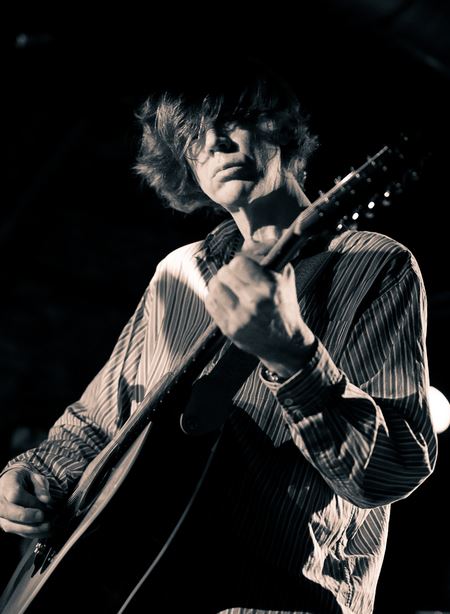 Thurston Joseph Moore (born July 25, 1958) is an American musician best known as a singer, songwriter and guitarist of Sonic Youth. He has also participated in many solo and group collaborations outside of Sonic Youth, as well as running the Ecstatic Peace! record label.
In 2012, Moore started a new band Chelsea Light Moving, with their first track, "Burroughs", released as a free download. Chelsea Light Moving's eponymous debut was released on 5 March 2013.
Moore was ranked 34th in Rolling Stone's 2004 edition of the "100 Greatest Guitarists of All Time." In May 2012, Spin published a staff-selected top 100 ranking Moore and his Sonic Youth bandmate Lee Ranaldo together on number 1.
Moore was born in Coral Gables, Florida and was raised in Bethel, Connecticut. Although he enrolled at Western Connecticut State University, he opted to move to New York City instead. There he learned to play guitar from Glenn Branca and soon co-founded Sonic Youth, serving as the band's guitarist and lead vocalist.
In 1985, he married Sonic Youth bassist, guitarist and vocalist Kim Gordon, with whom he has a daughter, Coco Hayley Gordon Moore. Thurston is known for playing Fender Jazzmaster guitars along with a host of other Fender models like the Mustang and Jaguar. Thurston is also very well known for being very harsh on his guitars.
In addition to his work with Sonic Youth, Moore has also released albums as a solo artist, one under the moniker David Adelmen, including 1995's "Psychic Hearts". He has collaborated with scores of artists, including My Cat is an Alien, DJ Spooky, Nels Cline, William Hooker, Christian Marclay, Loren Mazzacane Connors, R.E.M. and Cock E.S.P. In the mid-90's Moore formed a side band, The Dim Stars, with punk legend Richard Hell of Richard Hell and the Voidoids. In 2004, Moore performed in and produced an album for the all-star noise band To Live and Shave in L.A., the lineup of which also features Andrew W.K..
In 2004 Rolling Stone ranked him and Lee Ranaldo, of Sonic Youth, the 33rd and 34th best guitarists of all time. Their playing style is very innovative and they both use a large variety of extended techniques, like for instance their 3rd Bridge screwdriver technique.
Outside of his work as musical performer Moore runs the independent record label Ecstatic Peace and reviews new music in Arthur Magazine. In May 2005, he released the book Mix Tape: The Art of Cassette Culture.
Solo albums
Psychic Hearts (1995, Geffen Records)
Root (1998, Lo Recordings)
Trees Outside the Academy (2007, Ecstatic Peace)
Demolished Thoughts (2011, Matador Records)