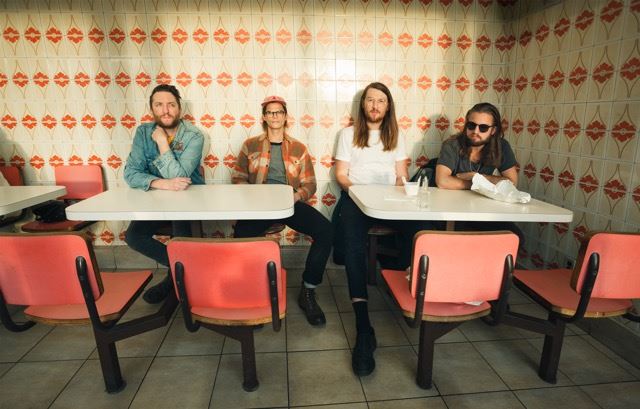 The Wooden Sky is a Canadian indie rock band based in Toronto, Ontario, that formed in 2003 as Friday Morning's Regret, but changed their name in 2007. They trace their roots back through the winter of 2003, when with a collection of songs under his arm, Gavin Gardiner began to seek out musical collaborators to help bring his sketches out from the bedroom and onto the stage. It was soon after the first snow fall that Andrew Wyatt and Chris Cocca joined Gardiner and began to flush out ideas that would become their first EP. It was only after they had finished this record that they realized it possible to put their newfound interests on display. Moving from a makeshift studio and into Gardiner’s garage in downtown Toronto, Canada a place the three had come to call home only the year before, they began the plot to share their amateurish themes with others.
Certainly much has changed since those formative years huddled around space heaters and dodging noise complaints. Gone are the songs they began as teenagers and gone even is the name, Friday Morning’s Regret, with which they had branded themselves. In its place stands the Wooden Sky, with new fulltime and moonlighting members Simon Walker, Anissa Heart and Andrew Kekewich. When Lost at Sea, the Wooden Sky’s debut LP, was originally released in February 2007 to a sold-out Horseshoe Tavern and reveals the band arranging fragile folk songs in a context that has drawn comparison to such modern acts as the Great Lake Swimmers, Neutral Milk Hotel and Okkervil River.
Following a year of hard work, the When Lost at Sea has been picked up and re-released by Black Box Recordings. The eclectic Toronto-area label is distributed by Fontana North, and is home to the Juno-nominated hip-hop artist Shad, and the MMVA-nominated Ten Second Epic. Re-released on February 26th, 2008, the album is also supported by a video for the song When Lost At Sea. The Wooden Sky tours frequently around Southern Ontario and into Quebec and has found itself playing alongside artists they greatly admire such as: Pascale Picard (Juno-nominated for Artist Of The Year, 2008), Meligrove Band, Cuff the Duke, Matthew Barber, ohbijou, Final Fantasy, Sebastien Grainger, Jim Jenny and the Pinetops, the Acorn, Howe Gelb (Giant Sand), the Bicycles etc.
The band recorded their second album, If I Don't Come Home, You'll Know I'm Gone in late 2008 and early 2009 in Montreal with producer Howard Bilerman (Arcade Fire, Thee Silver Mt. Zion, Basia Bulat). This record, released on August 25, 2009, saw them push the limits of the folk and country genres that was heard on When Lost At Sea with a more sonic and multi-instrumentally layered aesthetic.
They toured extensively throughout 2009 and 2010 in Canada, Europe and the United States in support of their 2009 release If I Don't Come Home, You'll Know I'm Gone with Elliott Brood, The Rural Alberta Advantage and Yukon Blonde.