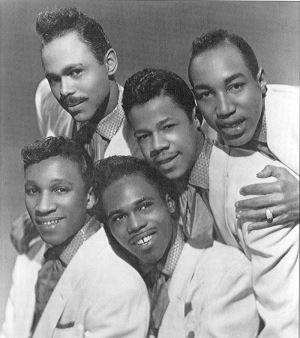 There are at least two groups who call themselves "The Valentines".
1) One of the most highly regarded American Doo Wop groups from the mid 1950s. Their records are highly sought by collectors.
Although they never had a record on the national hit parades, they were extremely popular in New York and the East Coast in general and had many regional big sellers. The stage performances of the group were sellouts and their harmonizing and choreography in sequence were amongst the most accomplished of their time. Influenced both musically and in their showmanship by The Cadillacs, The Solitaires, and The Flamingos, The Valentines were able to contribute an innovative stage presentation, outstanding vocals, and some unique performances.
The Valentines served as a launching pad for important careers. Their brilliant choreography made them one of the most cherished groups on the East Coast.
The group first formed in 1952 in the Sugar Hill district of Harlem as a quartet, harmonizing on the corner of 151st Street and Amsterdam Avenue. The original group comprised Raymond "Pop" Briggs (first tenor), Carl Hogan (second tenor), Mickey Francis (baritone), and Ronnie Bright (bass) calling themselves The Mistletoes; sometime afterwards they changed their names to The Dreamers.
While performing at a house party in 1954 they met a young singer-songwriter named Richard Barrett from Philadelphia who had sung with a group called The Angels (on Grand). An alternative version given by Phil Groia, in They All Sang on the Corner, states that the group actually met Barrett while he was serenading lovers in a park with his ukulele. Barrett was invited to join the group because they wanted his song Summer Love, and Richard’s distinctive lead vocals. The original tone of his voice gave the Valentines a sound that is still appreciated today. Now a quintet, The Dreamers adopted the name, The Valentines, taken from the title of Mickey Francis' favorite song My Funny Valentine. At this point their friend Raoul Cita of The Harptones brought them to Monte Bruce of Bruce Records where they did a Summer Love demo. Although DJ and unofficial mayor of Harlem Willie Bryant played the tape on local radio station WOV for a month, Bruce never issued it or recorded the group again. At this time, before the arrival of Alan Freed, New York Rhythm and Blues radio was dominated by Tommy ("Dr Jive") Smalls on WWRL.
The group did not have a contract with Bruce and when they came to the attention of Hy Weiss of Old Town Records he was able to sign them. Donald Razor from The Velvets (on Red Robin) came in to replace Hogan who was proving unreliable. In December 1954, Weiss issued the superb Barrett-penned love song, Tonight Kathleen, backed with a re-cut of Summer Love. Although popular locally, this ballad did not chart due to Old Town's poor distribution at this early time in their trading, and it has become a very rare record. Following this disappointment the group concentrated on their stage-work and built on their popularity.
In mid-1955, Eddie Edgehill replaced Donald Razor as second tenor and the group moved to George Goldner's Rama label where they issued the chime harmonied rocker Lily Maebelle in September. In all probability Barrett and Briggs wrote the song about Pop Brigg's sister Lil. This recording was punctuated by Jimmy Wright's energetic sax break, which was a common feature of many recordings on Goldner's labels, Rama and Gee. The recording became an East Coast favorite and the group made many appearances on Alan Freed shows at the Academy of Music and Brooklyn Paramount. They also performed at the Apollo, Howard, and Royal Theatres, and with shows hosted by other famous DJs of the time, Hal Jackson and "Jocko" (Douglas Henderson). At this point the group began appearing on stage with what was to become their trademark - white jackets with red cloth hearts ("valentines") on the pockets, red shirts and pink bowties. Borrowing heavily from The Cadillacs and Solitaires, Richard Barrett and The Valentines developed a dynamic stage routine.
Their next releases were I Love You Darling followed by the holiday ballad Christmas Prayer. In April 1956 came their biggest hit, The Woo Woo Train. This raw and spontaneous up-tempo number became a favourite of Alan Freed’s and he opened his shows with The Valentines coming onstage in a chugging conga line, like the carriages on a steam train. The vibrant stage performances of The Valentines have been captured on recording and photographically, but unfortunately no moving film survives.
Marv Goldberg maintains that The Valentines also sang on The Wrens' "C'est La Vie", at the Woo Woo session, but were not credited. If this is true, there are nine voices on this R&B classic. Mitch Rosalsky refutes this claim. Marv Goldberg's article is based on an interview with Ronnie Bright in 1977. Rosalsky, however, bases his evidence on the memory of The Wrens' Bobby Mansfield in 2000.
The outstanding ballads "Twenty Minutes (Before the Hour)" and "Natures Creation" followed, but were not widely appreciated at the time. At the group's final session, Carl Hogan returned to replace Eddie Edgehill, and David Clowney from The Pearls (U.S. band) (on Onyx) took Raymond Briggs' place. Another fine ballad, "Don't Say Goodnight", was cut but had little sales success.
2) A folk group active in 2009 who released a single, "You Make Me Me".
3) The Scottish rock/indie band from Falkirk, Stirlingshire, Scotland. Formed in February 2007. They won the Central Scotland Rock the Talk Battle of the Bands Finals at the Barrowlands in Glasgow. There most popular songs are Party Party, Charlies Revolver, Broken Windows and Not Another Love Story. They have just released there second EP called 'There's Always a Reason (For Treason)'. Current Line-Up is Andrew Dixon (Vocals/Guitar) Brian Sharp (Vocals/Bass) Craig Turnbull (Lead Guitar) Adam Kerry (Drums).