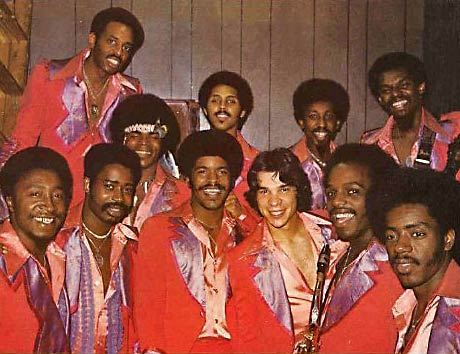 The Trammps are an American soul music group, known for being based in Philadelphia and being one of the first disco bands. The band's first major success was with their 1972 cover version of "Zing! Went the Strings of My Heart". However, they are best known for their Grammy winning song "Disco Inferno", which was originally released in 1976 and became a U.K. pop hit and U.S. R&B hit. Re-released in 1978 and also included in the 1977 soundtrack to 'Saturday Night Fever', it then became a big U.S. pop hit.
The music journalist Ron Wynn has noted that "the Trammps' prowess can't be measured by chart popularity; Ellis' booming, joyous vocals brilliantly championed the celebratory fervor and atmosphere that made disco both loved and hated among music fans." The first disco-related track they released was "Love Epidemic" back in 1973. That made them trailblazers of its pop and soul fueled sound.
The history of the Trammps grew from a 60s-era group, called "The Volcanos", which later became "The Moods". With a number of line-up changes by the early 1970s, the band membership included gospel-influenced lead singer, Jimmy Ellis, drummer and bass singer, Earl Young, with brothers, Stanley and Harold 'Doc' Wade. Members of the Philadelphia recording band, MFSB played with the group on records and on tour in the 70s with singer, Robert Upchurch joining later. The group was produced by the Philadelphia team of Ronnie Baker, Norman Harris and Young, all MFSB mainstays who played on the recording sessions and contributed songs.
Their debut chart entry came via an upbeat cover version of the standard, "Zing! Went the Strings of My Heart", which became a Top 20 US R&B chart hit in 1972.
Their first few recordings were released on Buddah Records, including "Hold Back The Night" which was a hit in the UK and on the Billboard R&B chart in 1973, before a re-release saw it climb the U.S. Hot 100 two years later. Several R&B hits followed during a stay with Philadelphia International subsidiary, Golden Fleece (run by Baker-Harris-Young) before they signed to Atlantic Records.
Their single "Disco Inferno" (1976), which was included on the Grammy Award winning Saturday Night Fever soundtrack in 1977,[3] reached #11 on the Billboard Hot 100 chart in May 1978.[4]
Other major hits included "Hold Back the Night" (1975) (UK #5) and "That's Where the Happy People Go" (1976). In late 1977, the Trammps released the song "The Night the Lights Went Out" to commemorate the electrical blackout that affected New York City on July 13, 1977.
Their signature song, "Disco Inferno", has been covered by Tina Turner and Cyndi Lauper. In addition, Graham Parker covered "Hold Back The Night" on the "The Pink Parker EP" in 1977, and reached #20 in the UK Singles Chart, and Top 60 in the US.
On September 19, 2005, the group's "Disco Inferno" was inducted into the Dance Music Hall of Fame at a ceremony held in New York. The song was part-written by Ron Kersey, a producer-arranger and a member of MFSB, who also played with Trammps in the 1970s for a time. During the ceremony, the original band members performed together for the first time in 25 years.
Two versions of the group, with differing line-ups, currently tour the nostalgia circuit. On March 8, 2012, lead singer Jimmy Ellis died at a nursing home in Rock Hill, South Carolina, at the age of 74. The cause of death was not immediately known but he suffered from Alzheimers' disease.
Earl Young's Trammps still continue to record and as at August 2014 have recently released "Get your lovin while you can" written by the Steals brothers renowned for their Philly hits such as 'Could it be I'm falling in love' for The Detroit Spinners.
Website: http://thetrammps.net/