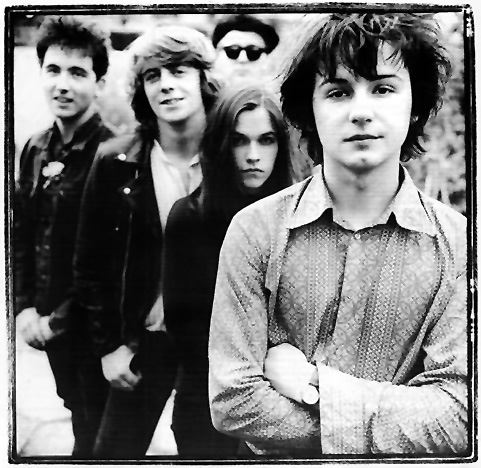 'beyond the realm of natural vision'
Formed in 1987 by Stephen Lawrie, The Telescopes have been mining a unique anti-myopian seam of drone/dream noise & psych for over 20 years. Their first release was a split flexi disc with Loop on the Cheree label in 1988, followed by the snarling 7 inch "Kick the Wall", and the pounding "7th# Disaster" EP.
They moved to What Goes On Records in 1989 and stormed the independent charts with stream of output, including a livid debut LP "Taste" and "The Perfect Needle" EP, which captured the hearts of a grateful nation. A live album appeared on Fierce Records and after signing to Creation Records, a more psyche induced sound followed with singles like "Flying", and their "#Untitled Second" album. Now perceived by many as a lost classic, the record was a commercial failure at the time and in 1994 the band disappeared from the public eye.
After an 8-year void The Telescopes returned as an 11 piece featuring core members Stephen Lawrie & Jo Doran with a new album "Third Wave" on NYC label Double Agent. John Peel, who said he was both "amazed and glad they were still practicing their mysterious art", championed the album.
In 2003 the group scaled down to four and toured the UK and Italy improvising free drone noise pieces, culminating in the Winter EP on Hungry Audio, regarded by many as one of the groups finest.
At the Audioscope festival in 2004 The Telescopes finished their set by drilling through gtr pickups. The Fourier Transform label released a recording of the event as a ltd edition, hand numbered, blue vinyl split 10" single, with Vibracathedral Orchestra on the flipside.
Re-issues of early material followed, on great labels like Rev-ola, Spaceage, Midsummer Madness and The Committee To Keep Music Evil, bringing their sound to a new generation of ears, and prompting the NME to declare 'the genius of The Telescopes'.
The Telescopes 4th album was released on their own Antenna label in 2005: "in another universe altogether... incredible" (Nat Cramp NME); "Sublimely present music, knowingly spontaneous". (Frances May Morgan, Plan B). They embarked on a UK tour with support from Experimental Audio Research. And despite incarceration, deportation and escape from a burning car wreck, made it back to the studio to record a mesmerizing acoustic session for Double Agent entitled 'Auditory Illusions', featuring a video by Dan Hopkins.
After a second tour of Italy and a handful of UK appearances came The Telescopes Hungry Audio Tapes, a fabulous mini album for Hungry Audio, and the alluring Night Terrors EP. The first in a series of ltd edition 7"s for the Trensmat label: "it has a very real & crazy originality that carries fat tons of wallop" (The Wire); "check out the telescopes' excellent 7", which contains two epic funereal dirges". (Julian Cope). During this period the line up disintegrated.
In 2006 Bridget Hayden joined. An artist in her own right, Bridget was also a co founder of Vibracathedral Orchestra. Both Hayden and Lawrie were shocked by the intensity of their first jam, and the collaboration continues to confuse and electrify: "Together they harness a primeval drone, rich in texture, and build it beautifully in unison with soaring feedback, guitar manipulation & viola which forever spiral outward, fractal and hypnotic - a bed of noise percolating at the edges of audition."
As a volcanic two piece they toured Europe, Scandinavia, the West Coast of America and released two 7"s for Trensmat. The Wire magazine described "Psychic Viewfinder" as "A great feedback symphony and "Another Whip" as "Another amazing single by the revived Telescopes; the new version of this outfit has been consistently spectacular". Both records sold out within an hour of pre-release.
In 2008 they unleashed "Infinite Suns" on the Textile label. The Telescopes 6th album is a selection of analogue tape recordings taken in a room used for seances, with a multi directional microphone used to capture environmental response. Recording levels were set close to saturation, allowing for chance interaction with the tape machine. Side one closes with an improvisation anchored on a lock-groove from the final throes of "Taste". It is locked again to play endlessly.
Bridget & Stephen continue to play together sporadically, either as The Telescopes or Infinite Suns. A new single "Landing Shadows" is scheduled for release on the Champion Version label in March. All copies have sold out in advance.
The Telescopes live experience is currently Stephen Lawrie and members of either The Fauns, or One Unique Signal. The live album "Live. Aftertaste" is scheduled for release in March, on the Static Charge label. It is a livid document, recorded in past/present/future tense; a rare and memorable glimpse into the waves beyond the realm of natural vision that first inspired Lawrie to write the original back in 1988.
Most recently, "Taste" has been reissued by BOMP! along with the tracks from The Perfect Needle EP. Trensmat has issued the Black Eyed Dog 7" (2012), and Neon Sigh has issued the 7th LP from The Telescopes, entitled "HARM", in late 2013. The Telescopes project is currently performing shows internationally and more singles are scheduled to follow in 2014.