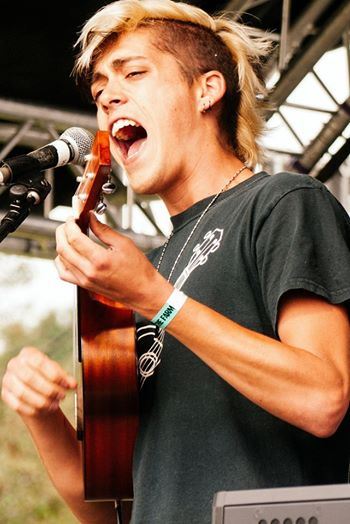 A Solo Project, ‘The Skunk-Boy’ is Nathaniel Swettenham.
Master of his craft, this musical alchemist weaves words and music together casting a spell over all who listen. Superbly crafted, his song lyrics, beautiful voice and touch on the ukulele and piano keys will hold your attention like a woven spell. There, when you are gently suspended and least expect it, he will throw in explosions of hip hop and rap that will make you gasp and smile and bring you back down to the ground. Plain truths become emblazoned in gold and the world is revealed and transformed, as he takes you on a journey through elements of life, both his and yours, by reflection.
He wrote his first song in 2010 when he rescued his brother's uke from a dusty corner. He wrote a kind of anti-love song called '4th On My List Of Loveable Evil Dictators' about an ex girlfriend, which Tom Robinson liked and a few more in a similar philosophical vein; songs about life, dreams, God, time, morals, revision notes, love (of course), pain, hard work, cannabis, a small eco friendly creature called Mr Bell the Bogey Bug and a Million Brilliant Different Virulent Things.
A member of The Vineyard Church, his Christian belief is central to his life.
Some of his influences are: The Beatles, Randy Newman, James Taylor and Paul Simon, Vampire Weekend, Bombay Bicycle Club, Bonzo Dog Doo Dah Band, ....... and more recently Belle & Sebastian.
- Self-titled physical & digital format EP released in 2012.
"Breathless, bouncy and catchier than chlamydia, this first effort from Melton's SBP could restore faith amongst the most jaded of cynics in the lost art of the intelligent pop song. Splicing strands of hip hop, indie and R&B into something that doesn’t really resemble any of them is a skill in itself, but tossing wry lyrics and fiendishly hummable tunes into the mix is, quite frankly, taking the piss."
- EP Review by Alex Scoppie, THE MONOGRAPH (Nov 18, 2012)
“Nate Swettenham, the cheekbone-wielding man-child behind Skunk-Boy Project is no ordinary singer-songwriter. Equal parts Elton John, Patrick Wolf and Randy Newman; Nate’s recent self-titled EP is an exhilarating listen, but it’s on stage that he really comes to life. Armed with just his ukelele and his voice, many a Gwdihw crowd has been silenced by his charm, humility and incredible songs.”
- James Chant, GWDIHW LISTINGS (2014)