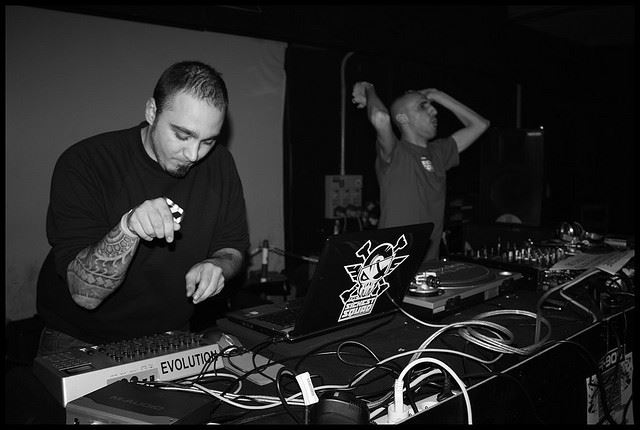 Before the birth of the Sick dj Team in the summer of 2000, Xtr and Tnd had collaborated for a year. Their first apparition together is in Tnd’s pub: Eretika. At beginning the team played lot’s of genres: techno, hardcore, industrial e breakcore. At the same time Sirio made one of the most interesting internet website: “Industrial-gabber.com”, from which are promoted some tracks of the Sick. In a small time the collaboration with the webmaster as been increased with a final official entrance of him in the team. One year later the three djs decided to released an E.P., “SICK 001” with six tracks, including, Inspector Fucker. The idea is that of a self production, but the problems were lots, so they proposed their project to whom knows very well about hardcore: ”TRAXTORM RECORDS! An year later their first meeting in Traxtorm, “Inspector Fucker” is on sale. Naturally it has been an year full of work to satisfy the Stunned Guys, which published this ep under the new label “G-net records”. All Sick dj team’s efforts are rewarded, their first ep is soon in the track list of the sellest hardcore compilation: “TRAXTORM POWER 2003”. An just after some months, three of the tracks had been published on “THUNDERSCREAM COMPILATION”. The next two years had been dedicated to the improbe of a new genre that they have been interested at, and they now still love: Frenchcore! Lots of work and various sound experiments come together in “She’s a fucking cocksucker”, first release of the new genre, published on “TEMPLE OF TERROR 2005”. New sound, new name, so Sick dj Team became The Sickest Squad. Is the end of 2004 and from this time releases have been published non-stop…In january 2005 the three artists, satisfied by the new sound, decided to make the most important step: they send a demo to whom the consider the creator of frenchcore: “Radium”. The french artist, understanding what is the value of the squad, released “The Sickest EP”, published in september only eight month after the first contact with him. Waiting the answer from the “master” they still work very hard. The collaboration with Frazzbass carried out the releases “Noistorm 001 – Nobody escape” and “Shit and noiz art 009 – kill your brain”. When Randy open again “909% black label”, specialized in industrial and frenchcore, the sickest squad proposed “Obbligo o verità”, first vinyl in italian published in september too, followed by a review that has called them “reveletion frenchcore of the year”, and that excite and galvanize the three guys. at the end of 2005 lots of vinyl have been published and some of their tracks have been selected for nomerous compilations. And for the future… they will continue with these success… in 2006, Sickest published, following the success of the first one,a new project in italian on 909 "il clitoride", an ep which soon began a success crossing also italian borders. this will be the last project with the 3 guys togheter, some time later in fact sirio will left the squad. after that on strike records the new team published a limited edition 7" with 2 tracks over 200 bpm. thank's to these releases the team increased his success beginning to perform in many parties. more success more work..., 2007 is without doubt the most important year for them with a lot of surprises.live performances have been increased all over europe, and also their discography grows up very fast:here you are 4 new releases, including in april a various with Randy, speedfreak e frazzbass which will goes on "thunderdome 2007 compilation". at the same time the squad met Lenny Dee with whom they immediately began to collaborate in many projects, first of all "LENNY DEE, RANDY & THE SICKEST SQUAD - Boomshakalaka", wich soon began an hit!! After that Lenny suggest the creation of "TECKNO KILLERS", project that include him, the sickest and of course Randy, so let's work!! after so many frenchcore, the squad decide to open his mind to a new genre, creating the project "NEO GENESI" which in february has already 2 releases the first one as TECKNO KILLERS and the other one with a remix for "Martyn Hare".... the use again also the alias SICK DJ TEAM completely changing the style publishing "SICK DJ TEAM - YOUTHANASIA" on industrial strength! the year is just began and the team has lot of techno, hardcore e frenchcore releases ready to destroy every dancefloor!!