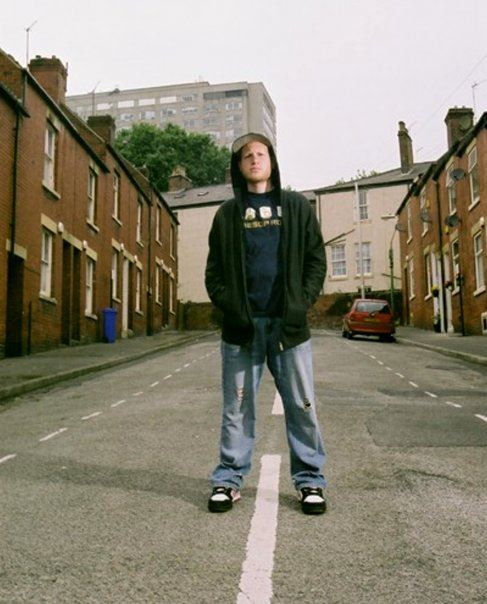 The Ruby Kid is a twenty-four year old hip-hop artist and spoken-word poet, based in London but originally from Nottingham (via Sheffield and with roots in New York's Jewish community). As a surly adolescent, The Ruby Kid divided his time between listening to American independent hip-hop (think Aesop Rock, El-P and Atmosphere) and causing trouble as an anti-capitalist political activist in various trade union and working-class campaigns. Now that he’s outgrown his adolescence, he plans to spend the remainder of his life in more-or-less the same fashion.
Cutting his rap teeth battling at his Nottingham comprehensive, The Ruby Kid began recording in 2007 after moving to Sheffield to study English Literature at university. A substantial local profile and following soon developed, as Steel City music fans gravitated towards something unorthodox, leftfield and radical in a scene dominated by generic indie rock on the one hand and bassline-influenced grime and garage on the other.
2008 saw him perform at countless live venues throughout Sheffield, as well as clocking up gigs in London and Nottingham. These included packed shows at Sheffield’s The Plug alongside grime superstars Wiley and Skepta, at which The Ruby Kid performed to audiences of over 800. His first release, the free five-track demo 'La Manif' garnered effusive praise from the local music press and prompted a reviewer at the well-respected Sandman Magazine to compare him to both Bob Dylan and Allen Ginsberg in the same review (no, really).
The Ruby Kid released the 'Winter In The City' EP at Sheffield’s Fuzz Club in March 2009, and has been gigging regularly since then both in Sheffield and across the country, frequently performing at benefit gigs and DIY events as well as appearing at Sheffield's 'Urban Glastonbury', Tramlines Festival, in both 2009 and 2010. Often accompanied on stage by his live backing band Black Jacobins, The Ruby Kid has shared bills with artists as diverse as Jehst, Micall Parknsun, Kate Tempest, Dirty Revolution, Babar Luck, Toddla T, Master Shortie, Kid Acne, Rodney P, Themselves and Anti-Pop Consortium. In March 2010, he completed a UK tour alongside folk-punk outfit Al Baker & The Dole Queue, taking in dates in Manchester, Leeds, Brighton, Bristol, Cambridge, Nottingham and London. His latest EP, 'Maps', was released in December 2010 and was produced by Dan Angell. It has elicited comparisons to Albert Einstein and legendary painter Edward Hopper (no, honestly. It really has). The Ruby Kid believes he may be the first rapper ever to be compared to either of these people.
Outside of music, his political activism (firmly anchored in the realm of left-wing troublemaking and predicated on the kind of ideas that your Daily Mail-reading aunt would probably describe as "extremist") has seen him make a nuisance of himself for rich folk as part of various working-class, anti-capitalist campaigns throughout the UK and even led to his tweets from the recent student protests at Millbank being featured in The Guardian and on American news channel CNN. Since he as so far been unable to make the creation and performance of esoteric indie-rap pay the bills, The Ruby Kid works part-time for the socialist newspaper Solidarity as well as working as a fencing coach in clubs and schools around London (I know it sounds like we're making this up to make him sound interesting and unusual, but it's all true. I mean - if we were gonna make stuff up we'd have picked a cooler sport than fencing. Maybe slamball or something like that).
The Ruby Kid claims that his work combines the best elements of, amongst others, Woody Allen, Hal Draper and Sean Daley. We say he's out of his ridiculously pretentious, self-indulgent mind (again), but we'll let you draw your own conclusions.
(Bio taken from http://www.therubykid.com)