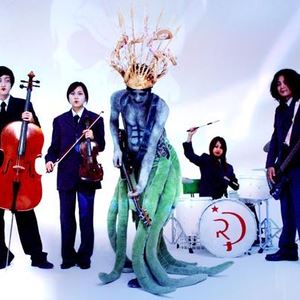 The Red Paintings are an Australian orchestral art rock band originally formed in Geelong, Victoria but who have been based over the last few years in Los Angeles. The band consists of lead vocalist and songwriter Trash McSweeney on guitar, sequencing and samples, with a revolving lineup across the globe. The current touring line up as of 2013 is Alix Kol (violin, vocals); Mitch McLennan (bass), Andy Davis (drums) and Emma Baker (cello). The band is known for their unique, confronting and intense themed performances incorporating elements of theatre and art, often dubbed "orchestral sci-fi art rock".
The band's members often dress in elaborate themed costumes, ranging from geisha outfits, alien costumes and sea creature/Neptune themes. They employ elaborate and eccentric stage props to support their shows, varying from statues, giant robots, children's toys, literary and Tim Burton-themed props and self-made video projections. They often invite members of the audience to paint on blank canvasses during their shows, and sometimes "human canvases" are painted on instead.
The band and concept was formed in 1999 in Geelong by songwriter Trash McSweeney after he suffered a violent seizure. As a consequence of the seizure, McSweeney was purported to have developed colour-sound synethesia. During this period, they had little success breaking into the local music scene. While on a holiday in Brisbane, McSweeney received positive feedback and show offers at an impromptu gig, and thought relocating there might give the band better chances. Frustrated with the Geelong scene, McSweeney offered other band members the opportunity to relocate, but eventually moved to Brisbane and formed a new lineup. During this period the band produced three independent EPs: Angel Flummox, Reality (Ahead of Schedule) and Cinema Love.
In Brisbane, they soon became known for their unique shows and experimentation. After some initial hardships, McSweeney soon found like-minded musicians in Josh Engelking (percussion), Bo Whitton (bass guitar), Ellen Stancombe (violin) and Wayne Jennings (cello). The newly formed lineup soon released the "Rain" single. Based on the single and performances, McSweeney soon began to feature heavily in local media, becoming known for his views on music, eccentric interviews/performances and the influence of his colour synesthesia on his music and art. In 2003 the band conducted two extensive national tours, including sets at the Livid and Big Day Out festivals. Following this success, a live performance was recorded with Brisbane community radio station 4ZZZ FM and was released in 2004 as the album The Virgin Mary Australian Tour Acoustic/Strings Album. They also headlined the 2004 Valley Fiesta, and played support for Australian singer–songwriter Missy Higgins. 2005 saw the band conduct a two-week tour of China, and release the Walls EP with Modern Music/Sony BMG. The EP received high rotation play on the national youth radio station, Triple J. The title track, "Walls", entered the stations "Net 50" chart at #3 and charted for fifteen weeks. Sometime around this release, bass player Bo Whitton left the band and was replaced by Amanda Holmes.
The next release from the band in 2006, the Destroy the Robots EP, would see the emergence of the Robot Trilogy concept. Also, after a period with no regular percussionist, current drummer Andy Davis was hired. Clashes with their Modern Music label/Sony BMG label at the time over creative direction saw the band ending its relationship after the EP was released, and becoming independent of a label or outside management. The band toured Australia's capital cities and regional centres for the Destroy the Robots EP. In each capital city, unannounced 'Robot Marches' were staged, where fan-made giant (up to 9-foot) robots were paraded through pedestrian malls.
In 2006, Amanda Palmer of The Dresden Dolls contacted the band with an offer to support their Australian tour. The tour was a great success for the band, and they were invited to continue as support for the tour in New Zealand, the UK and US. Before leaving for the US, long-time cellist Wayne Jennings departed the band, and upon returning to Australia, new cellist David Sue Yek joined the band. The band received significant attention in the US, and were able to release a live EP and documentary DVD from the tour; Live in Minneapolis and Seizure & Synesthesia. The band returned to play two special Christmas-themed charity events, and released the third EP in the Robots Trilogy, the Feed the Wolf. This EP was funded entirely from fan donations and was also the last album bassist Amanda Holmes featured in.