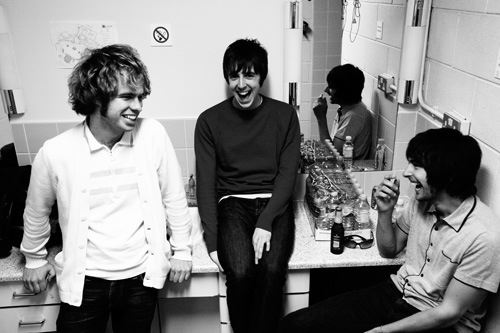 There are two bands called 'The Rascals'.
1) The Rascals (initially known as The Young Rascals) were an American soul and rock group of the 1960s. Eddie Brigati (vocals), Felix Cavaliere (keyboard, vocals), Gene Cornish (guitar) and Dino Danelli (drums) started the band in Brigati and Danelli's native state New Jersey. Their first public performance took place at the Choo Choo Club in Garfield on Saturday, February 27th, 1965. Three-quarters of the group - Brigati, Cavaliere and Cornish - had previously been members of Joey Dee and the Starliters. Eddie's brother, David Brigati, an original Starliter, helped arrange the vocal harmonies and sang backgrounds on many of the group's recordings (informally earning the designation as the Fifth Rascal). When Atlantic Records signed them, they discovered that another group (Borrah Minevitch's and Johnny Puleo's Harmonica Rascals) objected to the release of records under the name Rascals. To avoid conflict, manager Sid Bernstein decided to rename the group the Young Rascals.
The Young Rascals had a minor hit with "I Ain't Gonna Eat Out My Heart Anymore" (1965), followed by the #1 single "Good Lovin'" (1966, originally by The Olympics). Then the band's songwriting team of Brigati and Cavaliere began providing most of their songs, and the hits kept coming for the next two years, including "I've Been Lonely Too Long", "You Better Run", "Groovin'" (#1, 1967), "It's Wonderful", "A Girl Like You", "How Can I Be Sure?" (which David Cassidy would record in 1972 for a #1 hit in the United Kingdom) and "A Beautiful Morning" (1968).
Guitarist Gene Cornish provided several songs of his own, such as "I'm Gonna Love You" and "No Love To Give."
In early 1968, the group dropped the "Young" from their name.
The Rascals' best work arguably came from their 1968 album Once Upon A Dream, which featured several leads each from Brigati and Cavaliere. Though the only success for a single on the album was "It's Wonderful" (#20 on the US charts), the album utilized frequent instrumentals, and peaked at #9 on the album charts. The album was praised by some critics for such songs as "Rainy Day", "My World" and the title track. Understandably, the song "My Hawaii" became a top of the charts hit in Hawaii.
Time Peace: The Rascals' Greatest Hits, released in mid-1968, topped the album chart and became the group's best-selling album. The same year, "People Got to Be Free", a horn-punctuated plea for racial tolerance (the band was known for refusing to tour on segregated bills) and their third U.S. #1 single, was also their final Top Ten hit.
Later singles and albums were not as popular, with only two top-40 releases in 1969, and none afterward.
In 1970, Brigati left the group, followed by Cornish in 1971. The last album with them as active members was Search & Nearness (hitting #198 in the U.S.), which featured Brigati's last performances as a member singing lead on the Cornish-penned "You Don't Know" and their cover of The Box Tops hit "The Letter". The only single release from the album was the spiritually-themed "Glory, Glory" (#58 in the US), with backing vocals by The Sweet Inspirations.
Cavaliere shifted toward more jazz and gospel influenced writing; he and Danelli released two more albums on Columbia Records as The Rascals, Peaceful World (U.S. #122) and The Island Of Real (U.S. #180), using other musicians and singers. These albums didn't sell as well as their earlier work and the group finally disbanded in 1972.
Cavaliere released several solo albums throughout the 1970s. Brigati, with his brother David, released Lost in the Wilderness in 1976. Cornish and Danelli worked together in other groups, including Bulldog and Fotomaker. In 1982, Cavaliere and Danelli joined Steve Van Zandt in Little Steven and the Disciples of Soul for the group's first two albums.
2) The Rascals were a three-piece indie rock band made of Miles Kane (guitar/vocals), Joe Edwards (bass), and Greg Mighall (drums). Hailing from the Wirral, on Merseyside, these three 21 year olds spent years learning their craft as part of The Little Flames, touring with bands like The Coral, The Zutons, and, most notably, the Arctic Monkeys. It was during this time supporting the Arctic Monkeys, inspired by their maverick, DIY spirit and refusal to comprise, the three youngest Flames decided it was time to trust their hearts and their instincts and go it alone.
In September 2006, they began jamming and writing new material as a three piece, and there was born The Rascals. Impressed by the raw energy and virtuosity of Miles’ playing, singer-songwriter Alex Turner approached him and suggested that he play lead guitar on a new Arctic Monkeys’ tune called "505". The Rascals were immediately signed to Deltasonic Records and played their first gig supporting Turner's band at Cardiff International Arena in June 2007.
August 2009, frontman Miles Kane confirmed that he left the band to pursue a solo career. The band was discontinued. Although receiving some commercial success by himself, fans of the group have kept the flame burning for reunions.