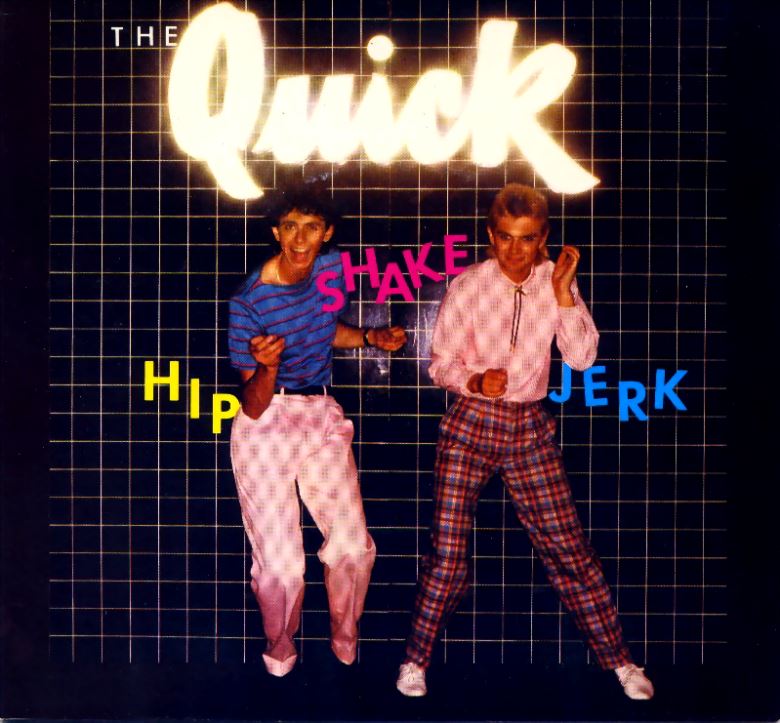 There are two bands known as The Quick
1) American power pop band
2) UK new wave pop duo
1)
The Quick were a mid-1970s pre-new wave/power pop band based in Los Angeles.
In their initial phase in late '74, The Quick proudly wore on their musical sleeves inspirations drawn from 1960s British Invasion bands: (The Beatles, The Who, The Kinks, The Move, Love Sculpture); and were modeled heavily on the Angelenos-cum-British expatriots, Sparks (formerly Halfnelson and their later offshoot band Jet UK).
Over the course of its 3-year existence, the band rapidly evolved a sound of its own, noteworthy for cleverly arranged three-part vocal harmonies, guitar solos frequently inspired by classical or film score music.
During its brief career, The Quick succeeded in releasing only one full-length record and never toured outside of California.
In Los Angeles, in between the glam and punk eras in the mid-1970s, there were few clubs for local bands to play original music. That changed when The Quick began playing the The Starwood Club in April 1976 and revived the The Whisky A Go Go in November 1976. During its career, The Quick played various club shows supporting such bands as Van Halen, Ramones, The Runaways and Crack The Sky, in addition to headlining slots. The Quick's most-attended show was an opening slot for Starz at the Santa Monica Civic Auditorium in 1977.
The Quick released one full-length album, 1976's Mondo Deco on Mercury Records, produced by Earle Mankey, the original guitarist of Sparks (formerly Halfnelson), one of the band's key influences. In 2003, various demo recordings were included on the 2003 Untold Rock Stories on Rev-Ola Records in the UK.
From September 1977 through March 1978, the band recorded demos produced by established Elektra Records staff arranger David Campbell. Referred to as The Elektra Demos, (though the band never signed with Elektra Records) the songs displayed a shift in the band's sound to, generally, a more contemporary, harder-rock approach. A few of the songs were released on 10" and 7" limited edition vinyl via the band's fan club, and all nine tracks were eventually released on Untold Rock Stories.
One of those tracks, "Pretty Please Me", was played frequently by local KROQ DJ Rodney Bingenheimer on his weekly "Rodney On the ROQ" radio show in 1978, but there were no records available to sell. The song was later covered and officially released by both Redd Kross and The Dickies.
In April 1978, the band invited fans to attend its 3rd anniversary show (and vote on the set list) at its Hollywood rehearsal space. It was The Quick's final show, as the group disbanded shortly afterwards.
* Most of The Quick's material was written by guitarist Steven Hufsteter, who later played in The Falcons (with Danny Benair and Marty Zucker), The Cruzados, and Tito & Tarantula. Wilde, Ainsworth and Bizeau also contributed songs.
* Lead vocalist Danny Wilde and bassist Ian (Grey) Ainsworth formed Great Buildings and released one LP on a sub-label of CBS Records. Wilde later partnered with Phil Solem as The Rembrandts [1]. They found success with their recording of the Michael Skloff/Allee Willis-written song "I'll Be There For You," which was used as the theme song for the TV show Friends
* Keyboardist Billy Bizeau would go on to collaborate on writing songs with Kim Fowley (the band's initial manager) for The Runaways.
* Drummer Danny Benair played with several other Los Angeles bands, including Flyboys, Choir Invisible, The Falcons, The Weirdos, and The Three O'Clock (formerly Salvation Army) before switching to the behind-the-scenes licensing business and founding a film soundtrack song placement agency, Natural Energy Lab [2].
* Original lead vocalist Marty Zucker was a member during the recording of early demos. One of those songs, "Guardian Angel" appeared in 1978 on Rhino Records' "Saturday Night Pogo" new wave compilation LP. To avoid copyright problems (see trivia) this early recording was credited to "The Young Republicans".
* During 1979-1981, Zucker rejoined Hufsteter and Benair as lead vocalist and saxophonist (using the stage name "Marty Martino") playing mostly original material in the blue-eyed soul and R&B-influenced The Falcons. They played frequent club and college campus shows and were recruited as the local back-up band for Chuck Berry at The Hollywood Palladium.
* "The Quick" was previously the name of a band that evolved into The Raspberries.
* Producer David Campbell is the father of musician Beck Hansen.
* Danny Benair's girlfriend, Lisa Fancher, went on to found the influential independent record label, Frontier Records.
Danny Wilde - lead vocalist, rhythm guitarist
Steven Hufsteter - lead guitarist, primary songwriter
Billy Bizeau - keyboardist, backing vocalist
Ian Ainsworth bassist, backing vocalist
Danny Benair - drummer
Marty Zucker - original lead vocalist (on early demos)+
* "Saturday Night Pogo" A Collection of Los Angeles New Wave Bands. Rhino Records RNLP 003 USA 1978+
* Mondo Deco, Mercury Records, USA, 1976 (vinyl LP only)
* Untold Rock Stories, Rev-Ola Records CR-REV-30, UK, 2003, 22 tracks (CD only) UPC: 5013929433021
* "Pretty Please Me" on D.I.Y.: We're Desperate: The L.A. Scene (1976-79), Rhino Records 71176, USA, 1993, 21 tracks (CD only)
2) The Quick were a UK new wave duo, consisting of Colin Campsie and George McFarlane. They released four albums under this name: "On The Uptake" (1980, Australia only), "Fascinating Rhythm" (1982), "International Thing" (1984) and "Wah Wah" (1986). Over the years they scored several hits around the world, including "Hip Shake Jerk" (1980, #12 Australia), "Zulu" (1981, #1 US Billboard Dance) and "Rhythm of the Jungle" (1982).
Campsie and McFarlane continued making music together, under the name Giant Steps.