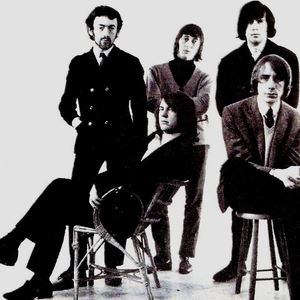 The Pretty Things are a 1960s and 1970s rock and roll band from London. They pioneered a raw approach to rhythm and blues (and later, psychedelia) that influenced a number of key bands of the 1960s British invasion, particularly The Rolling Stones, and David Bowie whose first hero was Phil May.
Pretty Things was preceded by Little Boy Blue and the Blue Boys which consisted of Dick Taylor, fellow Sidcup Art College student Keith Richards and Mick Jagger. When Brian Jones joined Little Boy Blue and the Blues Boys as guitarist, Taylor was pushed from playing guitar to bass and the Rolling Stones were formed.
Several months later Dick Taylor (born Richard Clifford Taylor, 28 January 1943, in Dartford, Kent) quit the newly formed Rolling Stones to pursue his schooling when he was accepted at London Central School of Art, where he met up with Phil May (born Phillip Arthur Dennis Kattner, on 9 November 1944, in Dartford, Kent) and they formed Pretty Things.
Taylor was once again playing his preferred guitar with May singing and playing harmonica. They recruited Brian Pendleton (born 13 April 1944 in Wolverhampton–died 16 May 2001 in Maidstone, Kent) on rhythm guitar; John Stax (born John Edward Lee Fullegar, 6 April 1944 in Crayford, Kent) on bass; and, after trying a couple of different drummers, including Pete Kitley and Viv Andrews, stuck with Viv Prince (born Vivian St John Prince, 9 August 1944, in Loughborough, Leices).
Early career
They caused a sensation in England, and their first three singles — "Rosalyn" #41, "Don't Bring Me Down" #10, and the self-penned "Honey I Need" at #13 — appeared in the UK singles chart in 1964-1965. They never had a hit in the United States, but had considerable success in their native United Kingdom and in Australia, New Zealand, Germany, and the Netherlands in the middle of the decade. However, in the U.S. they, along with The Yardbirds and Van Morrison's Them, were a huge influence on hundreds of garage bands, including the MC5 and The Seeds.
Their early material was hard-edged blues-rock influenced by Bo Diddley (they took their name from Diddley's 1955 song "Pretty Thing" in humorous contrast to their unkempt long-haired appearance) and Jimmy Reed, much like that of their contemporaries The Stones and The Yardbirds. They were known for wild "rock and roll" behaviour and shocking the establishment; their song "Midnight to Six Man" defined the mod lifestyle. Around this time, the first of what would be many personnel changes over the years also began, with Prince the first to go late in 1965. He was replaced by Skip Alan. Pendleton left late in 1966, and was not initially replaced. Then, Stax quit early in 1967 and Jon Povey and Wally Waller joined to make the band a five piece once again.
After an uncomfortable flirtation with mainstream pop on the Emotions album in 1967, they embraced psychedelia, producing the groundbreaking concept album S.F. Sorrow during 1967-68. This album, released in late 1968, is arguably one of the first rock operas, preceding The Who's Tommy by about a year. It was recorded in the legendary Abbey Road Studios six months after The Beatles' Sgt. Pepper's Lonely Hearts Club Band, and Pink Floyd's The Piper at the Gates of Dawn. Each album shares a similar forward-thinking late-1960s psychedelic sound (as well as sharing the same record producer, Norman Smith, as the Floyd). S.F. Sorrow was followed by the highly-acclaimed record album Parachute, which continued the psychedelic sound and was named "Album of the Year" in 1970 by Rolling Stone Magazine. During this period they also recorded an album for a young French millionaire, Philippe DeBarge, which was intended only to be circulated among the man's social circle. The acetate has since been bootlegged.
Later career
From this point on, the group enjoyed less in the way of commercial success, but the devotion of a strong cult following, especially with critics and other rock musicians. Their material in the early 1970s tended towards more the hard rock and early heavy metal end of the spectrum, although still blues-based, on albums like Silk Torpedo. 1980's Cross Talk saw them incorporating influences of punk and New Wave into their hard rock sound; like most of their records, it was an artistic but not a commercial success.
With a new manager, Mark St John, they gigged sporadically during the 1980s. By the end of the decade their profile had almost disappeared, when founder members Phil May and Dick Taylor reformed the band for a successful European blues tour in late 1990 with Stan Webb's Chicken Shack and Luther Allison. This gigging outfit included drummer Hans Waterman (formerly of Dutch rock group Solution), bassist Roelf ter Velt and guitarist/keyboardist Barkley McKay (Waco Brothers and Pine Valley Cosmonaut's with Jon Langford of Mekon Fame). This line up regularly toured the European mainland playing a revitalised set that show cased their earlier, rootsy blues and r'n'b materiel, until late 1994. By 1995, they reformed the Cross Talk line-up and added Frank Holland on guitar in place of Peter Tolson. Their label, Snapper Music, issued remastered CDs with many bonus tracks, plus a DVD of a re-recording of S.F. Sorrow at Abbey Road Studios (with Dave Gilmour & Arthur Brown guesting). They toured more frequently, including a tour of the U.S. for the first time in decades
Original rhythm guitarist Brian Pendleton died of lung cancer on May 16, 2001.
In the early 2000's, they released new recordings, including a live album and the studio album Rage Before Beauty.
In 2003, Alan Lakey's biography of the band, Growing Old Disgracefully, was published by Firefly. The book dealt with the long and involved history of the band, and paid special attention to the legal proceedings issued against EMI in the 1990s.