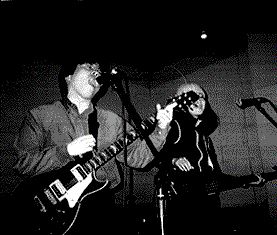 There are at least two bands using the name The Penelopes:
From Japan
1) The Japanese twee-pop outfit the Penelopes was essentially the work of singer/songwriter Tatsuhiko Watanabe; the group debuted in 1992 with the album In a Big Golden Cage, followed a year later by Touch the Ground. Although by this time the band was primarily a Watanabe solo project, he maintained the Penelopes' name for 1997's Kiss of Life; A Place in the Sun, issued that same year, was the first LP issued on Watanabe's own Vaudeville Park label.
~ Jason Ankeny, All Music Guide
2) The Penelopes (or tHe pEneLOpe) is a French dance rock band consists of Axel Basquiat and Vincent T. They are based in Paris.
History
After playing in both the rock and the electronic scenes and a few singles and remixes (especially for DJ Hell's International DeeJay Gigolo Records), tHe pEneLOpe composed their first album The Arrogance of Simplicity in 2006, which was released under Vitalic's label - Citizen Records.
The feature songs of the first album includes "Demian", which is sung by the former singer Dierdre Dubois of Ekova (song referring to the Hermann Hesse eponymous book), and "In a Storm", which features the former singer Samy Birnbach of the legendary Minimal Compact.
In 2008, the album has been re-released as a limited edition under the title: Choose: Arrogance, Simplicity or Both in Japan. It includes a remixed version of "Demian" by Black Strobe, a video of "Demian" directed by Danakil, "Gut Feeling", a live version of a cover of Devo recorded in Paris, and "Rebellion", originally interpreted by Arcade Fire. Another highlight of the album is "Je t'aime tant" (Elli et Jacno cover), where world renowned French writer Chloe Delaume sings duo with the Penelope, a song commissioned by French fashion designer agnès b. and was a part of the "Les Jeunes Gens Modernes" exhibition.
The Penelopes have played in many major festivals such as Dour Festival in Belgium, Sónar & Razzmatazz in Barcelona, Monegros, Santander, Garorock, Nandrin, and Tohu-Bohu. They have also played live in many countries including Japan, Spain, Belgium, UK, Sweden, Germany, Russia, USA, Hong Kong, Thailand, Taiwan, and South America. They have also opened for Ladytron in Paris and Geneva, for The Human League in Belgium (Les Nuits Botaniques), and played for agnès b. fashion shows in Paris and Tokyo.
Recently tHe pEneLOpe) won the Best Discovery 2007 band Qwartz Electronic Music Award for the album The Arrogance of Simplicity and are currently busy preparing for the second album, which will be released in the end of 2008.
www.thepenelopes.com