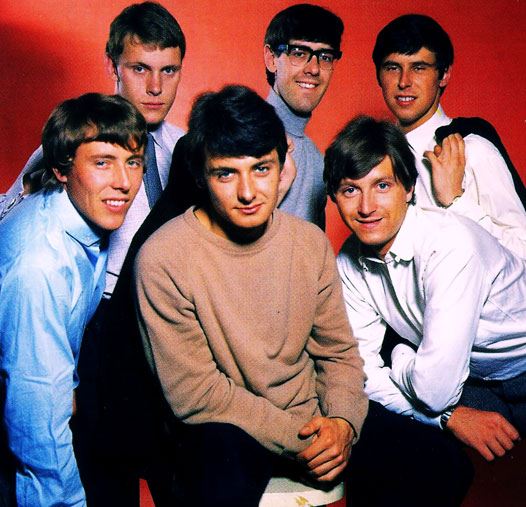 The Nashville Teens are a British pop band formed in Weybridge, Surrey in 1962.
Little is known of the founding musicians, except that Arthur Sharp began his career in music as the manager of Aerco Records in Woking, Surrey, but the 'Mark II' line-up comprised original singers Arthur Sharp and Ray Phillips, with former Cruisers Rock Combo members John Hawken (piano), Mick Dunford (guitar), Pete Harris (bass) and Dave Maine (drums). Additional guitarist Pete Shannon completed the band. Roger Groome replaced Maine shortly afterwards.
In 1963, third vocalist Terry Crowe joined briefly; but later that same year Dunford and Groome left, and were replaced by John Allen and Barry Jenkins respectively. (Crowe and Dunford later formed The Plebs with Danny McCulloch, and were re-united with Hawken in Renaissance in 1970.)
While playing in Hamburg (as most British bands of the era did), the Teens backed Jerry Lee Lewis for his Jerry Lee Lewis Live at the Star Club album; they later backed Carl Perkins on his hit "Big Bad Blues", and also played with Bo Diddley. At one such gig, they were spotted by Mickie Most who subsequently produced their June 1964 debut single, a bold interpretation of John D. Loudermilk's classic "Tobacco Road", which reached number 6 in the UK singles chart and made it to number 14 in the U.S. The follow-up, another Loudermilk song, "Google Eye", reached number 10 in the UK in October 1964.
A further three top fifty singles, "Find My Way Back Home" and "This Little Bird", followed in February and May 1965; with "The Hard Way" making a brief appearance the following year; but three subsequent records ("I Know How It Feels To Be Loved", "Forbidden Fruit" and "That's My Woman") all then failed to chart.
Jenkins left in 1966 to join the Animals, and was replaced by his predecessor Roger Groome.
The Nashville Teens record producers included Andrew Loog Oldham and Shel Talmy. Plus, The Teens appeared in the 1965 film Be My Guest.
Although they were musically as competent as any of their contemporaries, the Teens had no distinctive personality as a band, and this contributed to their lack of long-term success, as did Decca's typical lack of promotion. (By 1970, Decca's only remaining rock acts were the Rolling Stones and the Moody Blues, both of whom handled their own promotion). In 1971 they released a single, "Ella James" (a Roy Wood song) on Parlophone, but again without success.
Arthur Sharp left in 1972 to join their one-time manager Don Arden, and despite Phillips' best efforts, the Nashville Teens split in 1973.
They reformed in 1980, however, with Phillips as the only recognisable member joined by Peter Agate (guitar), Len Surtes (bass) and Adrian Metcalf (drums), and are still playing. The current line-up is Ray Phillips, Adrian Metcalfe, Colin Pattenden (bass and vocals), Simon Spratley (keyboards and vocals), and Ken Osborn (guitar).