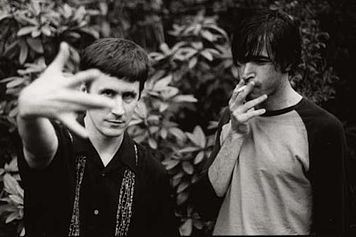 The Mountain Goats is the musical project of singer-songwriter and guitarist John Darnielle. The New Yorker magazine referred to him as "America’s best non-hip-hop lyricist." In its June 2006 issue, Paste magazine named Darnielle one of the "100 Best Living Songwriters." Darnielle’s lyrics are literate and filled with imagery that reference classic literature, religion and mythologies, pop culture, art, and history. Others are vague references to his stepfather, and with the 2005 album The Sunset Tree Darnielle offered a more intimate account of his experience as an abused child.
Darnielle began performing under the name the Mountain Goats in 1991 in Claremont, California, where he attended Pitzer College and worked as a psychiatric nurse. The band's name, the Mountain Goats, is a reference to the Screamin' Jay Hawkins song Yellow Coat. Darnielle released his first album, Taboo VI: The Homecoming, on Shrimper Records. Many of his first recordings and performances featured Darnielle accompanied by members of the all-girl reggae band, The Casual Girls, who became known as The Bright Mountain Choir. One of this group's members, Rachel Ware, continued to accompany Darnielle on bass, both live and in studio, until 1995.
Highly prolific, since the early 90s Darnielle has released over a dozen Mountain Goats albums, 6 full-length cassettes, various 7” singles, 10" and 12" EPs and has contributed to compilations and label samplers too numerous to mention. As of November 2006, the Mountain Goats’ song catalog encompasses 452 songs, a fair number of which have only been played live. Among this bewildering number of tunes is a song cycle named the “Alpha” series, about a dysfunctional couple, as well as one named the “Going To…” series, about people going someplace or other, usually not for fun but rather to flee from a bad situation in their lives. The last series alone totals over 40 songs to date. Additional song cycles from Darnielle's extensive repertoire include the "Standard Bitter Love Song #..." series, the "Orange Ball Of..." series, and the "Pure..." series, as well as a series of songs whose titles are simply chapters and verses from the Bible ("I Corinthians 13 8-10", etc.).
Although his last six albums (since Darnielle signed with 4AD Records) have seen more hi-fi production values, most of the Mountain Goats' recorded output is extremely lo-fi, the only accompaniment to Darnielle’s razor-sharp lyrics being an acoustic guitar and the occasional input of backing vocals, and then the sound of the tape recorder permeating the track at all times, effectively serving as a backing track in its own right.
In addition to his work with The Mountain Goats, Darnielle has also collaborated with Franklin Bruno (of Nothing Painted Blue) in The Extra Glenns (later named The Extra Lens).
Darnielle’s song "Cotton" was featured in the Showtime show Weeds. It can be heard in the middle and at the end of the 9th episode, The Punishment Light.
The songs "No Children," "Old College Try," and "Love Love Love" were each featured in separate episodes of the television series Moral Orel's third season, which has featured major running themes of alcoholism, regret, and domestic discontent.
For more info, MP3s, contact information, guitar tabs and various and sundry other items of interest, please see http://www.themountaingoats.net.