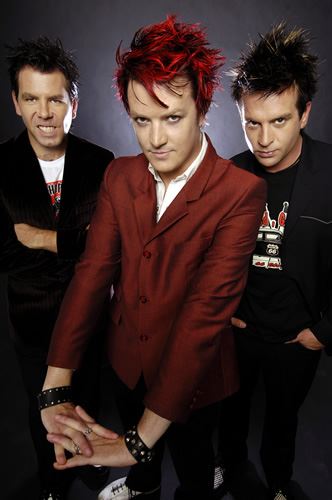 The Living End formed in 1994 after lead singer/guitarist Chris Cheney and bassist Scott Owen were introduced to each other by their older sisters at Wheelers Hill Secondary College in Melbourne, Australia. Cheney, obsessed with 80s rockabilly group the Stray Cats, convinced Owen to learn the double bass instead of the piano and they started playing gigs under the name Runaway Boys after the title of a Stray Cats song. The group went through a succession of drummers before settling on Joe Piripitzi.
The Living End got their first big break in 1995 when, after sending a t-shirt and a demo tape to Billie Joe Armstrong, they landed a support slot in Green Day's upcoming Australian tour. After the tour, the group went into the studio to record their debut EP Hellbound which received moderate support from community radio stations.
In November 1995, the band went back into the studio to record their second EP (It's for Your Own Good which they released several months later. This recording yielded their first major radio airplay with the song From Here On In, which was placed on high rotation on the youth radio network Triple J. Shortly after the release of the second EP, drummer Joe Piripitzi left the band and was replaced with Travis Dempsey who was soon playing with the band at major festivals such as Pushover and the Falls Festival. After a year touring Australia, The Living End again headed into the studio to record something new to sell at their now very popular shows. The result was the Second Solution / Prisoner of Society double single.
Prisoner of Society quickly became a national hit and the band signed on to Modular Recordings for the release of their debut self titled album, The Living End. The album was an instant hit with Australian audiences and resulted in six Australian singles (counting the "Second Solution" release as two because both songs received major airplay). The Living End became the second-highest-selling debut rock album in Australian music history, now five times platinum.
The Roll On album in 2000 was a more creative work, but did not manage to achieve the status of their earlier album. Cheney later stated that he was trying to prove to critics that The Living End were not a band simply defined by their hit Prisoner of Society, and the album showed this by displaying other influences, as well as their traditional fast-paced rockabilly music. The album even garnered comparison, by a few critics, to seminal punk band The Clash's creative breakthrough, London Calling.
The band hit a quiet period after that during which Chris Cheney had a tragic car accident on the Great Ocean Road, rendering him unable to play for a significant period of time. He had been on the road to the house of a member of fellow Australian band Bodyjar.
In 2003, after Chris's recovery and with new drummer Andy Strachan, the band made a comeback, releasing One Said to the Other, Who's Gonna Save Us? and getting air play once again. This was followed by heavy touring (including Big Day Out) and a release of Modern ARTillery.
In late 2004, the band has released a singles collection From Here on In: The Singles 1997-2004 as well as a DVD, which included all video clips and a "supergig", collections of the band's most famous songs performed in Australia, Japan and the USA. The DVD also features the band's history- documented in interviews and home footage.
Recently, Chris performed at the 2004 ARIA awards as part of the supergroup The Wrights, featuring members of many other Australian rock bands.
Chris Cheney and Scott Owen have won the Best Guitarist and Best Bassist awards for 2004 and 2005, in the Jack Awards.
The band performs regularly in Melbourne, one performance recently was for the Channel V Music Bus at Federation Square Melbourne, Australia (15th of December 2005) which saw a capacity crowd of between 4,500 and 5,000 people attend. The event saw many under 18's get the chance to see their idols for free, and for a lucky few, the chance to sing with Chris Cheney, unplanned of course.
The Living End's fourth album, titled State of Emergency, was released on February 4 2006 and was recorded in Byron Bay after they played in the Splendour in the Grass festival. They had finished the recording and the artwork for State of Emergency in mid December 2005. The single "What's on Your Radio was released on November 20, 2005, and debuted at #9 on the ARIA singles chart. The second single, "Wake Up" was released on February 19 and debuted at #5 on the ARIA singles chart. The group is currently signed to Adeline Records, owned and run by Billie Joe and Adrianne Armstrong.
In 2008 The Living End released their fifth studio album titled as White Noise, showing more hard rock influenced sound of The Living End. First single from the album was a double A-side single White Noise/How Do We Know which was released physically and digitally 5 July 2008. The second single Moment in the Sun was released 25 October 2008. The third single, Raise the Alarm, was released 22 December 2008. In 2009 The Living End started the Raise the Alarm Tour.