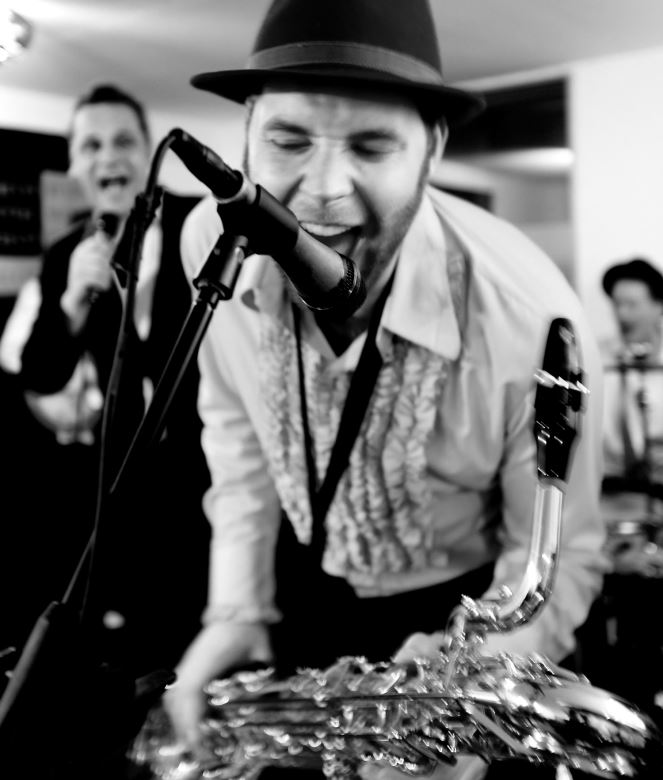 Lots of people who know what they are talking about have said great things about us:
"Stomps like a super charged cabaret horn section. When they really let rip, as in potty mouthed Glen Miller pastiche Big Sis Little Sis, they hit home with bawdy theatrical panache"
Thomas H Green, Q Magazine
" A musical law unto themselves, this debut is upbeat, cocky and, thank God, completely fresh 8/10" Amy McGill Rocksound
"Just the right amount of dirt under the fingernails attitude and punky/indie bite. This is as cool as f.... Single of the Week " The Organ Magazine
"Amazing: I predict this will spread through the country like a virus"
Shaun Keaveney, BBC 6 Music Breakfast Show
"Mighty, mighty refreshing"
John Kennedy, XFM
"A bunch of musical rogues!"
Steve Lamacq, Radio 2 New Music Show
"Ungodly, infectious melodies. The most entertaining band I've ever seen? Damn right!"
Lee Puddefoot, Artrocker
"A veritable slice of jazz infested, good time swing"
Mischa Pearlman, Fly Magazine
"And if you don't own a pair of dancing shoes, this will inspire you to buy some."
Jon Blackstaffe, Blues in Britain Magazine
"A manic mix of rocking blues and jazzy, dirty swing delivered with riffed up panache"
Molloy Woodcraft, The Observer
"Combines grace and danger in equal parts. Purveys a rumbling sound that owes something to Louis Jordon and Earl Bostic as much as it does to Madness and Ian Dury"
The Word Magazine (I Am A Missile was also covermounted on this edition)
"A fine celebration of human weakness set to fine thrilling refreshing music you can dance to – swinging jumping jiving big band blues, somewhere near jazz and just beyond rock 'n roll - go enjoy it, we weren't sure they'd pull it off over the length of a whole album, they more than did"
Album of the Week - Sean O, The Organ
"More foul mouthed than Noel Gallagher down the front at a Jay-zee concert"
Stephen Worthy, NME (trust the NME to give us a thorough pasting in print)
"Outrageous, different and very, very good"
Carol Borrington, Blues Matters
"A tangle of finger clicking beats and lung bustin saxophones that will make you dance so hard you will forget who you are. And you know what? You will love every second of it"
Lee Puddefoot, Artrocker album review extract (September edition)
" Brassy in more ways than one, the band kick up a shitstorm of showtunes (as opposed to a snowstorm of shit tunes) that are as potty mouthed and seductively burlesque as they are authentically rendered. With this much talent on parade the band should have no problem converting the unswung masses before long"
Backbone 24/7 Magazine
" White Light Fever has inevitably drawn comparisons with Mark Ronson's productions. The Kingsize Five dig deeper and wider though, pulling in everything from Glen Miller to Jerry lee Lewis, sprucing it up with modern punky zest and sloshing it down with lashings of wit and pizzazz by the gallon"
Steve Hillar, The Metro
"Swings, shocks and sass have accompanied The Kingsize Five as they release their debut album CD, ‘White Light Fever’ on Little Genius Recordings via Genepool / Universal
The collective have garnered support from radio tastemakers like John Kennedy, Steve Lamacq and Shaun Keaveny, and have placed their caustic genre-crossing mix of swing, jazz, ‘50s rock ‘n’ roll, punk and blues, firmly on the map. Their first two singles, I Am A Missile and One For My Daddy, went to number 1 in the iTunes Blues charts and remained in the Top 3 selling records in the genre for 3 weeks. An upcoming CD cover-mount on the August edition of The Word magazine will only serve to expose the phenomenon further to the beady eyes and ears of the more discerning music fans.
The Kingsize Five are not an ordinary musical incarnation. They’ve traveled through the musical mill and emerged jaded yet loud, belligerent yet skilled. A ramshackle haven for ex-stand-up comedians, burlesque dancers, gaolers and media moguls, Smash Hits stickers and ice cream men; yet also chancers who have played in everything from The Fratelli’s, Bad Manners, Boy George, The Cinematic Orchestra, King Kurt, Apollo 440, Jools Holland Big Band and Blur. They have lived, failed (seven major record deals between them!) and now stamp on skinny white boys playing punk electric guitar. A rundown of Mark Ronson twisted with Glen Miller to a rockin’ beat, the album is produced by Junk Scientist (The Rakes, Larrikin Love) to create a contemporary twist to old-style musical roots.
Such a sardonic collective of clowns, bullsh*tters and poets are inevitably going to get themselves into scrapes. In fact the gang was approached by some members of a shady Asian gambling syndicate who asked them to play in their casino in China. Being wheelers, dealers and general chancers, the posse knows a good gambling holiday when they see one, and are jetting off there with loaded sleeves later this year.
The Kingsize Five are Michael Brown, Danny Howard, Coach Crowe, Double Dave, Paula Daunt, Sarah Morley, , Zoe Alexandria, Paul Silver, The O’Neils, Jamie Wortley and any other individuals with talent and tenacity who come their way.
“This is music that cannot be played as background for it relentlessly insists the listener is sporting their dancing shoes. And if you don’t own a pair of dancing shoes, it might just inspire you to buy some.” Jon Blackstaffe: Blues in Britain Magazine