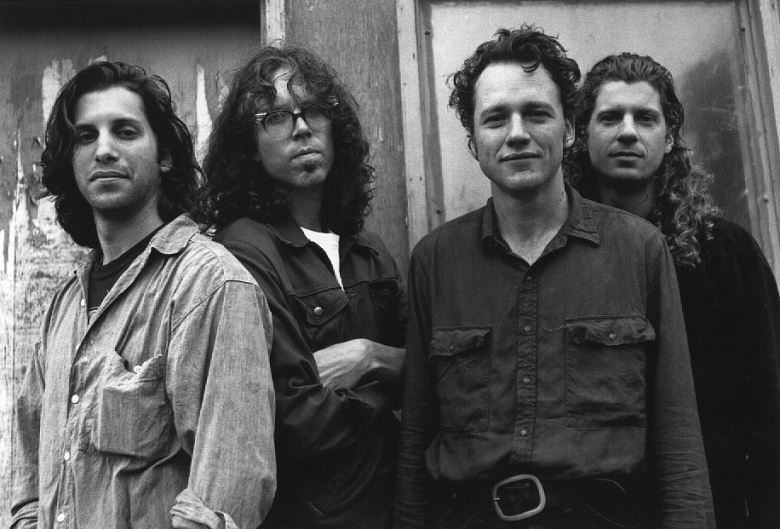 The Jayhawks are an American alt-country and rock band that began in the mid-1980s. On hiatus from 2005 to 2009, the band reunited and, in September 2011, released a new album, "Mockingbird Time".
Led by the gifted songwriting, impeccable playing, and honeyed harmonies of vocalists/guitarists Gary Louris and Mark Olson, the Jayhawks' shimmering blend of country, folk, and bar band rock made them one of the most widely acclaimed artists to emerge from the alternative country scene. The group sprung up in 1985 out of the fertile Minneapolis, Minnesota, musical community, where Olson had been playing standup bass in a rockabilly band called Stagger Lee until his desire to write and perform his own country-folk material prompted him to begin a solo career. He enlisted Marc Perlman, the guitarist for a local band called the Neglecters, whom Olson then convinced to take up the bass; after the addition of drummer Norm Rogers, the group first played in front of a crowd of less than a dozen people. One of those patrons, however, was Gary Louris, a veteran of the local bands Safety Last and Schnauzer; after the show, he and Olson began talking, and by the end of the evening Louris, a guitarist famed locally for his innovative, pedal steel-like sound, had become a member of the group, eventually named the Jayhawks.
Drawing on influences like Gram Parsons, the Louvin Brothers, Tim Hardin, and Nashville Skyline-era Bob Dylan, the Jayhawks quickly became a local favorite, honing their sound in Twin Cities clubs before releasing their eponymous debut in 1986. Issued in a pressing of just a few thousand copies, the album was well received by those who heard it; a major recording deal did not follow, however, so the band continued to polish their craft live, with more and more of their songs bearing writing credits belonging to both Olson and Louris. In October 1988, after a lineup change which saw the departure of Rogers (who joined Cows) followed by the addition of drummer Thad Spencer, Louris was nearly killed in an auto accident, and the Jayhawks went on hiatus. At much the same time, however, executives at the Minneapolis independent label Twin/Tone decided to issue the demos the group had been stockpiling over the past few years, and after some overdubbing and remixing, Blue Earth appeared in 1989. Richer in sound and more complex in its themes and concerns, the record's release brought the group considerable attention, and also brought Louris back into the fold. After another drummer switch (Spencer for Ken Callahan), the band hit the road for a national tour.
The Jayhawks were signed to major label American Records after producer George Drakoulias heard The Blue Earth playing in the background during a phone call to Twin/Tone's offices. With Drakoulias in the producer's seat, the band recorded its breakthrough album, Hollywood Town Hall, in 1991; a mainstay of critics' annual "best of" lists, the album generated the alternative radio hits "Waiting for the Sun," "Take Me With You (When You Go)," and "Settled Down Like Rain." After a tour which saw the permanent addition of Minneapolis pianist Karen Grotberg, the individual bandmembers guested on albums from Counting Crows, Soul Asylum, Maria McKee, Joe Henry, and others. Before recording the fourth Jayhawks album, Callahan departed, and was replaced by session drummer Don Heffington. The resulting record, 1995's Tomorrow the Green Grass, is a beautiful collection of songs led off by the elegiac single "Blue," the recipient of significant airplay. A tour followed, but after some months on the road, Olson announced he was quitting the band. In 1997, the Jayhawks — now consisting of Louris, Perlman, Grotberg, and drummer Tim O'Reagan — released the album Sound of Lies. Grotberg left the band in early 2000, and was replaced by ex-DAG keyboardist Jen Gunderman for the band's sixth album, Smile. A move to a new label (Lost Highway) in 2002 brought about more changes in the band's ever evolving lineup, leaving Louris, Perlman, and O' Reagan (assisted by newcomer Stephen McCarthy on guitar) to craft 2003's rootsier Rainy Day Music.
After a hiatus from 2005-9, the band reunited and, in 2011, recorded a new album. The lineup consists of Mark Olson, Gary Louris, Marc Perlman, Karen Grotberg, and Tim O'Reagan. The album, Mockingbird Time, was released on 20 September 2011.
http://www.jayhawksofficial.com
There was also a group by the same name in the late 50's.