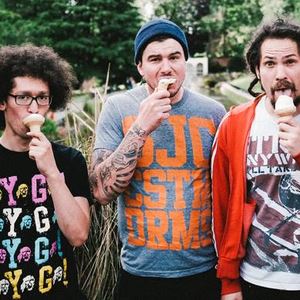 Formed in Ayr in 2001, The Hostiles bring the upbeat energy of west coast US ska punk to the less-sunny climes of west coast Scotland. Their take is spirited and infectious, combining distorted guitars riffs, low-slung rhythms, in-your-face vocals and a two-pronged brass backbone of trumpet and trombone. It’s a formula that’s helped the five-piece build a strong reputation on the live circuit as an act to be reckoned with, good times guaranteed. The punk and ska scenes’ big guns agree, with The Hostiles recently touring the UK with Reel Big Fish, in addition to sharing stages with the likes of Less Than Jake, Spunge, Mad Caddies, Zebrahead, Sonic Boom Six, The King Blues, Random Hand, Leftover Crack, Neville Staple, The Toasters, Fishbone, The Damned, The Beat, Strike Anywhere, Streetlight Manifesto and Capdown, to name a few.
The Hostiles started with brothers Josh (guitar) and Chris (bass), who grew up in the States listening to the likes of Reel Big Fish, NOFX and No Doubt. After moving to Ayr in their teens, they were introduced to heavier ska-core acts like Capdown, Lightyear and King Prawn by local like-minded ska-lovers, including Callum Douglas (drums) and Steve Bruce (trombone – the current line-up was later completed by Ruaridh Crumlish on trumpet). From these foundations, The Hostiles’ sound was formed – a sound they continue to hone with each record release and every ear-ringing, sweat-drenched live performance.
After a string of early EPs, The Hostiles released their debut full-length album Always Looking Forward in April 2009. Recorded at Maybank Studios with Matt Harvey, produced by Tim G (Sonic Boom Six, Random Hand, MTV Mash-Up) and mastered by Peter Miles (The King Blues, Failsafe, The Skints), it marked a significant step forward for the band. A release-night gig in Glasgow supporting Catch 22 was followed by an 18 date tour, the success of which helped Always Looking Forward find a home on Cardiff-based label Go Steady Records. Warmly received by the underground ska scene, Always Looking Forward established The Hostiles as one of Scotland’s most respected ska bands.
The raised profile’s kept them busy ever since: in 2010, Hostiles tracks featured on several compilations in Japan, USA, UK and Italy, helping them boost their international presence while maintaining a busy tour schedule back home. The following year, the band’s frequent flyer miles soared, with a 4-week European tour taking in shows across the continent, and in August 2012, amidst preparations for their second full-length album (due next year), the Late Nights…and Early Hours EP emerged. Demonstrating a harder-edged sound, it captures the band at their most confident, ready to take on whatever is thrown their way next with a grin.
http://www.thehostiles.co.uk