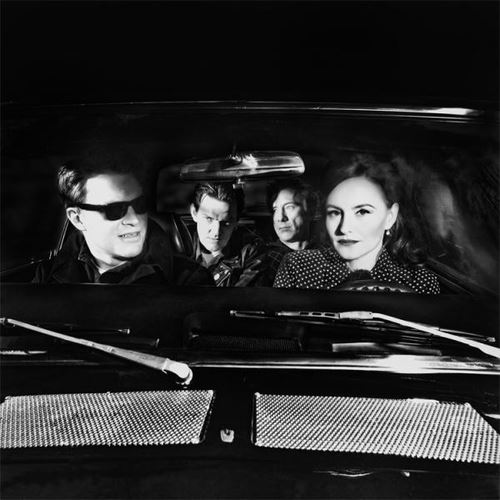 The Hillbilly Moon Explosion are a pan-European rock’n’roll band with much flair and a fast growing fan-base. They’re fronted by the Italian-Swiss songstress Emanuela Hutter and English exile singer and slap bassist Oliver Baroni, ably backed by English guitarist Duncan James and Swiss drummer Luke 'The Puke' Weyermann.
Emerging from the rockabilly scene in their home base of Zurich, they recently turned down an invitation to be the Swiss Eurovision entry. Known to some for their mini-hit ‘Johnny Are You Gay?’, a recent retrospective has propelled them gigging across Europe, including TV shows and a tour supporting Jeff Beck climaxing at the legendary Paris Olympia. A viral Cinéma vérité video from that album has attracted over 50,000 views: http://youtu.be/bANSizYxh-w
A single ‘My Love For Evermore’ precedes the album, on 7” and download. It’s a dark duet by Emanuela and guest Spark Phillips of infamous, wayward psychobilly band Demented Are Go, assisted by Geraint Watkins on organ, and backed with a rockabilly guitar cover of ‘Enola Gay’. A new ‘Bonnie & Clyde style’ video was filmed over 3 days and will be launched on the single release date. Stills from the shoot can be seen here: http://on.fb.me/ia21CJ
The album is produced by Greg Townson of US band The Hi-Risers, and recorded in London at Gold Top Studio, Camden, last year. (Gold Top Studio has now relocated to Gravity Shack, Tooting.)
TRACKS: - Buy Beg or Steal, Broken Heart, She Kicked Me To The Curb, Natascia, Trouble & Strife, My Love For Evermore (with Sparky), Night of the Living Ted, Imagine A World, Goin’ To Milano, Touch Me, Rock’n’Roll Girl, Chalk Farm Breakdown, Enola Gay. 13 tracks.
www.facebook.com/hillbillymoonexplosion
www.hillbillymoon.com
www.myspace.com/hillbillymoonexplosion
"It doesn't take a rocket scientist to work up a plausible old-school sound these days—a few twangy guitars, a pile of echo, a sneering lead vocal on top, and presto, you're ready to rumble. There's a difference, however, between a true vintage-tinged update and another in a series of Eddie Cochran copycats. Which brings us to Hillbilly Moon Explosion, Zurich-based rock revivalists who've spent the past few years touring Europe, issuing a pair of acclaimed releases (2002's Introducing The Hillbilly Moon Explosion, 2004's Bourgeois Baby) while watching their fan base grow by leaps and bounds. Mind you, this is no quaint Sun Records send-up; at their best, HME— bassist/vocalist Oliver Baroni; rhythm guitarist/vocalist Emanuela Hutter; guitarist Duncan James and drummer Luke Weyermann—come across like a Sam Phillips-produced soundtrack to a Sam Raimi shock flick, a furious bed of slap bass and pounding snare underpinning layers of menacing guitar lines, wailing background vocals, and eerie keyboard flourishes, with front-woman Hutter providing the perfect aural/visual focal point, fishnet stockings and all.
When it came time to lay tracks for a third independent effort, head Hillbillies Baroni and Hutter eventually headed for the US and wound up at the door of producer-engineer Mark Neill, owner of San Diego's Soil of the South Studios, where it’s all-analog, all the time. One could not imagine a better match-up: Neill, a rockabilly bred Southerner whose client list includes The Paladins, Los Straitjackets and Old 97s, is a rock archeologist of the highest order and vast collector of choice old-school audio tools, who knows how to nail it down in just a few takes using as few tracks possible (the way it was before we all had too much time and tracks on our hands). In order to provide Baroni and Hutter with the proper instrumental framework, Neill enlisted the support of cohorts like guitarist Eddie Angel (of Los Straitjackets fame), sax man Archie Thompson and drummer Craig 'Flash' Packham, with Neill himself overlaying lead and rhythm guitars. The result is All Grown Up, a faithfully prepared (and mainly mono-mixed) amalgam of unbridled rock tracks that clock in at a Ramones-like two-and-a-half minutes apiece, featuring Baroni's saxes-with-axes classic "Live the Life," Hutter’s sensually exotic take on "House of Bamboo," not to mention a tour-de-force rendering of Mel Larson’s "Little Lil," with Baroni's lead vocals authentically distorting like a Little Richard 45. And in case anyone's forgotten what real country is supposed to sound like, there's the Baroni-penned "Brown Eyed Boy," a lilting Loretta Lynn pastiche that belies the murderous intent described within.
How good is this stuff? "To think that these guys came over to San Diego from Europe with a bunch of songs on acoustic guitar and absolutely nailed the vintage rock'n'roll sound—and made it contemporary," remarks the normally reserved Neill. "I've never seen that happen before."
Dave Simons, Rolling Stone Magazine.
Source: http://www.hillbillymoon.com/press.html
http://www.hillbillymoon.com/meettheband.html
http://www.myspace.com/hillbillymoonexplosion