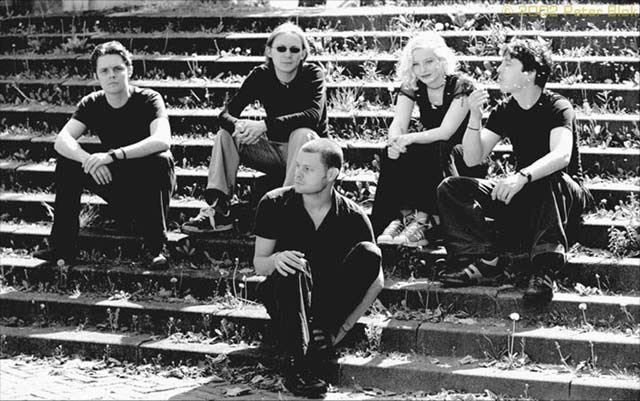 There are several bands called The Gathering:
1. The Gathering is a gothic metal / progressive rock / alternative rock band formed in Oss, the Netherlands, in 1989. They announced a hiatus in 2014. The current line-up consists of Silje Wergeland (lead vocals), René Rutten (guitars and flute), Frank Boeijen (keyboards), and Hans Rutten (drums). The band had some line-up changes during the years, the most notable being Silje Wergeland replacing in 2009 the former singer Anneke van Giersbergen (who was a member from 1994 to 2007).
Their first two albums, Always... (1992) in the death metal/doom metal style of the era and Almost a Dance (1993) that, though always regarded as a failure, played a part in the formation of gothic metal, were recorded with four different vocalists. Their subsequent release, Mandylion (1995), on which Anneke van Giersbergen sang for the first time, was a dark, haunting, and emotional piece of music. It was also one of the first albums of its kind in respect to female fronted metal bands, and it is still considered a standard by many female fronted metal bands.
Their following studio albums Nighttime Birds (1997), How to Measure a Planet? (1998), if_then_else (2000) and Souvenirs (2003) showed progress and maturation of the band.
There is also an electro-acoustic live album Sleepy Buildings: A Semi Acoustic Evening, which was released in 2004, and was followed by a similar semi-acoustic tour.
Their 8th studio album, Home, was released in April 2006. The Gathering has promoted this album with a tour and festivals for the rest of 2006-2007.
Last March 24th, in Santiago, Chile, the band recorded a live DVD entitled "A Noise Severe" more rock oriented, to complete the previously released DVD "A Sound Relief", which featured a more acoustic set. It was released with little delay at the end of November 2007, together with live 2CD from same place.
On June 5, 2007 it was announced that Anneke is going to leave The Gathering in August 2007 to focus on her new project, Agua de Annique and her family.
After van Giersbergen leaving, the band started working on new songs and finding new singers. With finding Silje Wergeland from Norway the band again completed the line up. Silje has been the singer of the Norwegian band Octavia Sperati for 8 years including several other projects. 9th album The West Pole also includes two very talented guest singers: the Dutch Anne van den Hoogen and Mexican Marcela Bovio (from Stream of Passion). The West Pole is a very vital, atmospheric and extravert rock orientated album, with all the quality and power the band is so famous for, also with many new elements. The sound is guitar driven, alive and urgent; a strong and beautifully coloured album with haunting female vocals. It’s produced by guitar player René Rutten and mixed & mastered by Zlaya Hadzich, who also did the production of Souvenirs.
10th full length Disclosure was released in September 2012.
They released Afterwords in 2013. ]Marjolein Kooijman (bass) left only a few months later.
http://www.gathering.nl
2. Gothic Rock band from Pretoria, South Africa, active in the second half of the 1980s. The Gathering released the 7inch single "Night and Day/Falling Crimson" and a handful of compilation tracks, e.g. "Perfect Souls" and "Wooden Walls" in 1988.