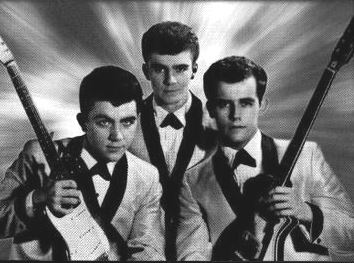 There are more groups named The Echoes.
#1 The Echoes were an American doo-wop group from Brooklyn, New York with one Top 20 hit, ‘Baby Blue’, in 1961. The group consisted of Harry Boyle (b. 1943, Brooklyn, New York, USA), Thomas Duffy (b. 1944, Brooklyn, New York, USA), and Tom Morrissey (b. 1943, Brooklyn, New York, USA). Originally called the Laurels, the group was given ‘Baby Blue’ but they decided not to record it. The Laurels changed their name to the Echoes. Jack Gold, owner of Paris Records, decided to release ‘Baby Blue’ on another label he was starting, SRG Records. The record was picked up by another label, Seg-Way, and it went up to number 12. In the 1980s, an album of the Echoes’ best material was released.
#2 THE ECHOES were formed in New York City in early 2000 by native Kentuckians Mark Alexander and Teresa Starr. Starr, a poet attending graduate school at Sarah Lawrence College, became the perfect voice for Alexander's insightful lyrics and plaintive melodies. Alexander, a veteran of performance since his elementary school days, had recorded and worked with a multitude of acts and artists over the years; but admitted finding a greater sense of freedom as part of THE ECHOES.
The group would begin playing in New York and its surrounding areas--eventually continuing their range along the East Coast to their homestate of Kentucky--with common venues including the Baggot Inn and CBGB in Greenwich Village, the C-Note in Alphabet City, Downtime in lower Manhattan, the Orange Bear in Tribeca, and the Turning Point in Piermont, New York. Performing numerous holiday shows, festivals, and benefits in homestate towns such as Aurora and Paducah, THE ECHOES would receive airtime and radio play in both their original hometown of Louisville and adopted hometown of Cadiz; as well as in larger cities such as Lexington and Murray, Kentucky.
Their first release, a limited edition EP titled "THE ECHOES SOUND OFF," was released in 2001 and was followed by a series of CD singles throughout 2003 and 2004; culminating in their first full-length CD "LISTEN UP... IT'S THE ECHOES" released in 2005. It was ultimately the wide distribution of this CD that would earn the group a rave review from journalist Joe Viglione at allmusic.com / the All Media Guide and allow their music to reach an even greater audience through various broadcasts and podcasts. The year 2007 would see the release of "NOW HEAR THIS" and show the band expanding not only their repertoire, but skills as performers and recording artists.
#3. { PHOTO IS SHOWN }The Echoes, Irvine California's dynamic power pop quartet. Their debut is a self-released, self-produced, and otherwise self-verbed eponymous EP, the band's unique yet "I've heard this before somewhere" sound is attributed to great songwriting and remarkable musicianship.( BIG HIT " BABY BLUE ") DOO WOP/ROCK MUSIC 1950'S :>)
#4. The Echoes is a rock/hard rock band from Moscow, Russia. Formed in 2006, the group still has no official releases, but they are about to appear this year. Dmitry Agapov, frontman, songwriter and composer for The Echoes, is also a guitarist in another Moscow band "Дорожный Вариант" (The Road Variant in English).
#5. Unsigned. From Cheltenham, England playing a powerful catchy pop punk style that captures anyones attention. The Echoes consists of: Chris Capewell (Lead Guitar and Vocals), Myk Elliott (Rhythm Guitar and Vocals), Adam Goddard (Bass Guitar) and Charles Pilsworth (Drums & Percussion). In This Scene is up for a free download via their Facebook, check it out now!