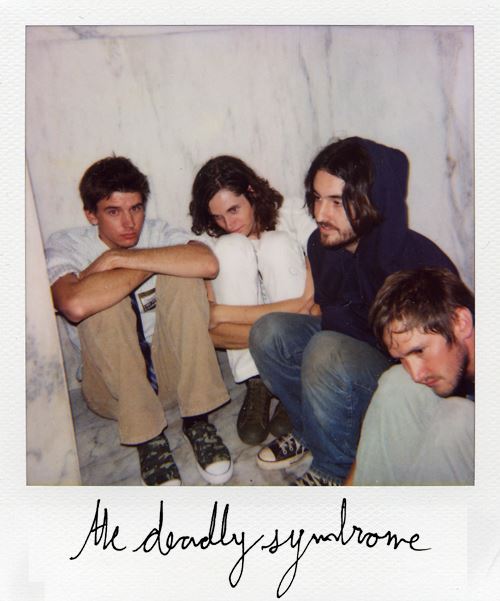 The four members of The Deadly Syndrome are Chris Richard, William Etling, Mike Hughes, and Jesse Hoy.
The first time I met Mike from The Deadly Syndrome, he was throwing up on my couch. He had been out drinking the night before with Will, tore the head off a paper mache dummy, wrestled it across a stranger’s front lawn and then stumbled up to my house (I was living with Will and Jesse, and soon Chris would move into the garage) where he puked all over everything and passed out.
There was a lot of that sort of thing when The Deadly Syndrome first got together. Everyone was running around having fun, working shitty jobs, and writing music all the time. The house was drowning in instruments. There were cheap old organs that somebody picked up off Craigslist. Guitars, pianos, keyboards, violins, all broken down and beat up, just laying around in case somebody needed them.
The weeks started to revolve around shows. You know how whenever someone says, “You should check out my friend’s band?” how your immediate reaction is “are you saying that just because they’re your friend?” I never had that problem. The guys attacked the stage; the audience lost their minds. Their shows were like festivals (with lots of cardboard cut outs). It was a wonderful couple of years.
And then it stopped being fun.
It’s a cliché to say that youth is fleeting. But it’s true. And it’s hard to separate youth from rock and roll. That’s not to say The Deadly Syndrome are a bunch of geriatrics, they aren’t. But after two years of being together they were four guys who loved music, but still weren’t able to do it for a living. Four guys who were getting older and starting to think about things like financial security, maybe starting a family, having a car that didn’t break down all the time, getting health insurance, etc – all the stuff that keeps making more and more noise as the years go by and you start growing up.
And growing up is tricky business in rock and roll. Because the truth is that while age doesn’t stifle creativity, it certainly encourages stagnation. And stagnation leads to a sad and boring road that either ends with too much thinking about The Good Old Days or Fat Elvis.
So after a couple of years I think the guys weren’t sure what to do. If you’ll allow me another cliché, things were starting to feel like an ending, rather than a beginning. At this point they could have very easily broken up. Left on good terms and gone their separate ways. Or they could have written another Ortolan. Similar songs played in the same venues, stretching out the good times as far as they could. Instead they moved all of their stuff into a cabin up in the woods and started over.
There weren’t a lot of updates, no hand wringing or bragging, nothing specific, just the occasional word that things were moving along. And then one day after about nine months had gone by, they let everyone know that they had finished an album and were calling it Nolens Volens.
The songs, the production, it all seems to be the work of a band that has found its strengths, and is busy seeing how far they can push them. You can hear the earlier, younger band throughout all the songs, but there’s something else there as well. A sort of self-assurance that gives each song its own life and space, along with a patience that usually isn’t associated with rock and roll.
More than anything else though, Nolens Volens is about growing up. About the give and take that comes with age and responsibility, about remembering the energy of youth and infusing it into a new, older life.
Or not. Fuck it, maybe I’m over thinking it. Maybe they just made a great record and plan to release it later this year and that’s all there is to it. After all, they’re all still in their 20’s for god’s sake! Why am I talking about growing up? There’s still plenty of time for being young, playing the music too loud, and puking all over everything just before passing out.
–Jason Greene