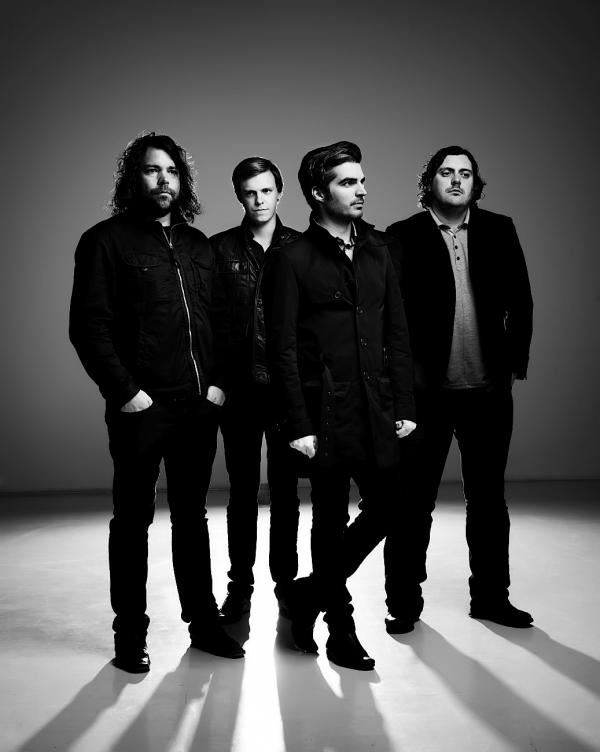 Indie/alternative band comprising American Nathan Nicholson, Australian Todd Howe and Englishmen Adam Harrison and Piers Hewitt; together they deliver a mixture of raucous bass-heavy grooves, alternately fragile and explosive vocals, and melodic sounds. Packed live performances show that TBR have amassed a solid fanbase, and one forgiving of the long waits between releases.
In 2000, Nathan Nicholson left Tennessee, America after the death of his mother, and came to London. The band formed in 2001 through a chance meeting at London's 12 Bar Club between vocalist Nathan and guitarist Todd. This quickly cemented into a firm friendship which resulted in them living and writing together. College friends Adam and Piers, were soon intrigued, and completed the line-up. All shared common influences, and a passion for epic, escapist music - The Boxer Rebellion was born.
In June 2003, after funding and releasing their own limited edition self-titled EP, they bolstered their way onto Glastonbury's New Bands tent, and were soon snapped up by Alan McGee's Poptones label, who put out first single Watermelon in the same year. Before the enormity of what they were doing had even registered, the Boxers spent months in the studio rehearsing and writing, before disaster struck for Nicholson, and riders and roadies were swapped for a hospital bed and saline drips. A twelve hour operation to remove a life-threatening growth from his stomach was successful. He was lucky. The result was the cancellation of tours with Razorlight and The Killers, among others.
The band was signed by major label Universal Music following Exits, who promised worldwide distribution and a free hand in continuing to create records of longevity and substance. Instead, the deal proved more of a curse than a blessing, as Universal became reluctant to continue to finance the lengthy gestation of the next record. Financial difficulties led Poptones to drop the Boxer Rebellion in early 2007, with Universal following suit soon after; however, both continued to hold rights to the band's catalogue and digital distribution. With the record nearly complete and invitations to tour from Editors and others still open, the band began a lengthy fight to get control back over them, which they eventually won in 2008. In January, an unmixed version of future single Evacuate was released on limited vinyl, but it would be a full year before anything approaching a full release was possible, and some of the band moved to Berlin in 2009.
With the money nearly running out and so a physical self-release impossible, the band entered an exclusive worldwide deal with iTunes to put their new record Union out as well as a re-release of Exits. The album charted highly, reaching #2 on the Alternative chart and #4 on the iTunes UK Top 100, but was ineligible for the official UK Top 40 as it was released when a physical release was required. The CD and vinyl were eventually released in August.
The Cold Still was released in the U.S. on 1 February 2011 on iTunes and is available on CD worldwide through the Boxer Rebellion's own label Absentee Recordings. The album charted on iTunes at #24 with a peak position of #20, spending 9 days on the US iTunes album chart. The band made their network television debut on 2 February 2011 on CBS's Late Show with David Letterman, where they performed the single "Step Out of the Car" live. The Boxer's new song "Both Sides are Even" was featured on ABC's Grey's Anatomy on 3 February 2011. Since the release of The Cold Still, the band have had several music placements including two in the videogame industry. "Step Out Of The Car" from The Cold Still was used in 2011's Rocksmith game and original composition "Losing You" was written exclusively for the Batman: Arkham City game soundtrack. Additionally "Caught By The Light" was used in the serial drama Nikita.
Also in 2011 the band released their first full-length live record Live in Tennessee. It was recorded and mixed by Ben McAmis and featured 16 tracks from a single concert.
On 7 November 2012, the band announced the release of their two volume B-Sides & Rarities Collection, Vol. 1 & 2, which contains tracks that had been previously recorded, but not included on initial releases of any of the studio albums. Volume one focused on material before and around the band's debut, Exits, and volume two included tracks that were released around and after Union, as well as some rarities that didn't make the cut or were included as bonus tracks for The Cold Still.
The band finished recording their fourth studio album, Promises, in the late part of February 2013. The music video for the debut single from the album, "Diamonds," was released on March 26. The band have toured regularly and released further singles, "Keep Moving", and "Promises".
On April 29, 2014, Todd Howe announced he was leaving the band to concentrate on production and other interests, leaving the Boxers as a three-piece.
http://www.theboxerrebellion.com
https://www.facebook.com/theboxerrebellion
http://instagram.com/theboxerrebellion#
http://www.youtube.com/user/theboxerrebellion
https://soundcloud.com/theboxerrebellion
Discography
2003 - The Boxer Rebellion EP, Watermelon
2004 - In Pursuit, Code Red
2005 - All You Do Is Talk, Exits LP, World Without End
2007 - Broken Glass, J F K F C
2008 - Evacuate, Don't Drag Your Dirty Feet
2009 - Union LP, Flashing Red Light Means Go, iTunes Live From London
2011 - The Cold Still LP, Step Out Of The Car, The Runner, No Harm, Live in Tennessee
2012 - B Sides & Rarities Vols. 1 & 2
2013 - Diamonds, Promises LP, Keep Moving
2014 - Promises