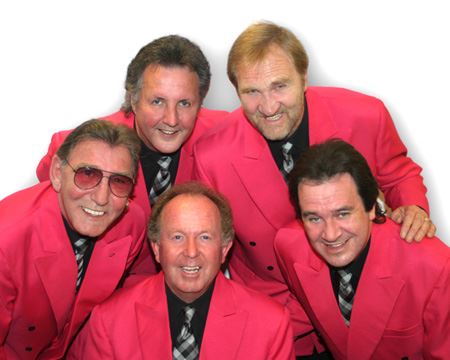 The Barron Knights is a British humorous pop group, originally formed in 1959 in Leighton Buzzard, Bedfordshire as The Knights of the Round Table. They became the Barron Knights on 5 October 1960. Although the Barron Knights undoubtedly had their own style and produced regular 'beat group' recordings in their own right, it was their production of humorous parodies that brought them the greatest success. In fact, their catalogue of recordings - although impressive - does not reflect their success as stage entertainers. By adapting their act to each new wave of emerging performers they were able to survive longer than their more conventional contemporaries, and even today can still be regularly found in cabaret or performing a seaside summer season.
They started out as a straight pop group, and spent a couple of years touring and playing in English dance halls before making their way to Hamburg, Germany. In 1963, at the invitation of Brian Epstein, they were one of the support acts on The Beatles' Christmas shows at the Finsbury Park Astoria in London. They became one of the few acts to tour with both The Beatles and The Rolling Stones.
They first came to fame in 1964 with the number "Call Up the Groups". It overcame copyright restrictions and parodied a number of the leading pop groups of the time including The Searchers, Freddie and the Dreamers, The Dave Clark Five, The Bachelors, The Rolling Stones, and The Beatles. The song imagined the various artists singing about being conscripted, or "called up" into the British Army, although actual conscription had ended in 1960. The single climbed to number 3 in the UK Singles Chart. As an example, the song "Bits and Pieces" by the The Dave Clark Five was parodied as "Boots and Blisters".
In 1967 the group released the single "Lazy Fat People", a satirical song written by Pete Townshend of The Who. In 1974 they toured South Africa with Petula Clark. By 1977 CBS Records signed the group and "Live in Trouble" reached number 7 in the UK Singles Chart. It was their first hit for over nine years. "Angelo" was just one song parodied on "Live in Trouble". 1978's "A Taste of Aggro" became the group's biggest hit with sales of over one million records.
They achieved four other hit singles in the 1960s and 1970s but their only U.S. Billboard Hot 100 charted single, "The Topical Song", was another comedic parody written by the American poet, Robert Spring White. Based upon Supertramp's "The Logical Song", White, who also took the 1980 American Song Festival award in the folk category for "Where Does The River Go", confined his humorous lyric compositions for The Barron Knights.
As of 2008 the group continued to perform for a worldwide audience.
Original lead singer Duke D'Mond died 9 April 2009.
Original band member details
Duke D'Mond (born Richard Edward Palmer, 25 February 1943, Dunstable, Bedfordshire, England, died 9 April 2009, Oxford) - Vocalist
Barron Anthony (born Anthony John Osmond, 15 June 1934, RAF Abingdon, Abingdon, Oxfordshire, England) - Guitarist / Vocalist
Butch Baker (born Leslie John Baker, 16 July 1941, Amersham, Buckinghamshire, England) - Guitarist / Vocalist replaced Juj Hopkins.
Peter Langford (born 10 April 1943, Durham, County Durham, England) - Bassist / Vocalist
Dave Ballinger (born David Alan Ballinger, 17 January 1939, Slough, Buckinghamshire, England) - Drummer
As of 2007, only Langford remains from the original line-up. Fellow founding member, Butch Baker, retired in January 2007, and was replaced by Len Crawley.