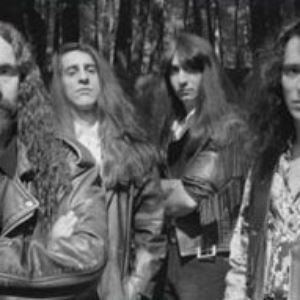 There are multiple bands by the name of Tarantula.
[1] A portuguese heavy metal band
[2] A relatively new band that blends elements of classical music and rock.
[3] A Czech thrash/power metal band.
[4] A Spanish progressive rock band.
[5] A Swedish band
[6] A Korean rock band
[7] A Japanese rapper
[8] An ex-Yugoslavian progressive rock band.
[1]Tarantula is a portuguese band formed in October 1981. By that time the Barros brothers were just kids dreaming about a musical career. After successful gigs in Portugal and Germany and two demo tapes, the band signed their first record deal in 1987. The album - entitled like the band - was the first one released in Portugal by a domestic heavy metal band and sold out in just a couple of weeks.
In 1990 “Kingdom of Lusitania” was released putting the band’s name in the international metal scene. They received several record deal proposals, but their domestic label, the multinational Polygram, didn’t want to co-operate with them.
The regular shows and the Rock`n`School (rock music school founded by the musicians of the band) occupied a lot of time and only in 1993 (“Tarantula III”) and 1995 (“Freedom’s Call”) they released new albums. These works had excellent reviews in European, South American and Japanese press and led them to more tours in Portugal and Spain. In 1995, on Tarantula's 15th anniversary about 15,000 people saw a big show with several guests. In 1997 the band played in various concerts e.g. with Manowar, Hammerfall, Gamma Ray or Jag Panzer, just to mention a few…
"Light Beyond The Dark" was their first album on AFM Records in 1999. The release show was presented in front of 1.200 maniacs that sold out the Hard Club. The “Tour beyond the Dark” had more than twenty dates in countries such as Portugal, Spain and Germany. TARANTULA played with Stratovarius, Motorhead, Squealer or Deep Purple. The two shows with Deep Purple in the Portuguese Coliseums (Porto and Lisbon) were fantastic and had more than 4,000 spectators in each concert.
In 2000 they travelled to Germany to record their new album “Dream Maker”. With producer Tommy Newton (Helloween, Conception, Victory, Elegy) they gave birth to their most powerful and a real amazing work. Tracks as «Dream Maker», «Never Surrender» (dedicated to the people of East Timor), «You can always touch the sky» and «Our Destiny» were created for the new millennium. After the release of «Dream Maker» the band did a Portuguese tour and played some festivals. Tarantula headlined Noites Ritual Rock, Seixal Rock and Hypermetal Fest. In Spain, they made a great show at the ROCK MACHINA FESTIVAL, with bands like Gamma Ray, Rhapsody, Blaze, Symphony X, Iron Savior, Kreator, In Flames and many others. METALMORPHOSIS is the third album for A.F.M. Records. Released in 2005, the album was produced and mixed by Thommy Newton (e.g. Victory, Helloween, Glenn Hughes, ...), the eye-catching cover artwork was done by Derek Gores (a.o. Edguy, Kamelot, Axxis, ...).
[4] Tarantula was one of the many prog bands that emerged in the second half of the Seventies, speerheaded by known Spanish formations like Triana, Blogue and Granada. They started as a quintet, led by keyboard player Vicente Guillot.
The melodic, very pleasant sound on their eponymous debut album from 1976 is not like the flamenco inspired groups as Triana, Cai or Mezquita but more close to the Seventies Italian Symphonic Prog (dramatic vocals by Rafael Cabrera evoking Banco and Le Orme along the lush vintage keyboards with wonderful drops of the unsurpassed Mellotron) and German symphonic prog like Jane and Ramses (harder-edged guitar and powerful organ runs).
In 1978 Tarantula released their second album entitled Tarantula II, the line-up has completely changed with Vicente Guillot as the only remaining original member. The music is also a different story: a harder-edged sound with a more direct approach, bringing early Uriah Heep to my mind.
If you want to check out Tarantula, their first is recommended because it’s in the symphonic prog tradition but with a more Italian prog touch. The strong points are the expressive vocals (with a theatrical undertone) and the varied vintage keyboards.
(from progarchives.com)
[6] See 타란툴라
[7] Tarantula was a member of the Japanese hip-hop group Spontania, formerly Hi-Timez. Born June 17 1977, he has studied abroad in the United States during his high school years. He has become widely recognized for the songs "'Libera Me' From Hell" and "Rap Is A Man's Soul!", both from the anime series Tengen Toppa Gurren Lagann.
[8] Tarantula released one album in 1986 titled "Žena zemljotres". Members: Mirče Toader, Nebojša Božić, Slobodan Ulemek, Zlatko Kosović.