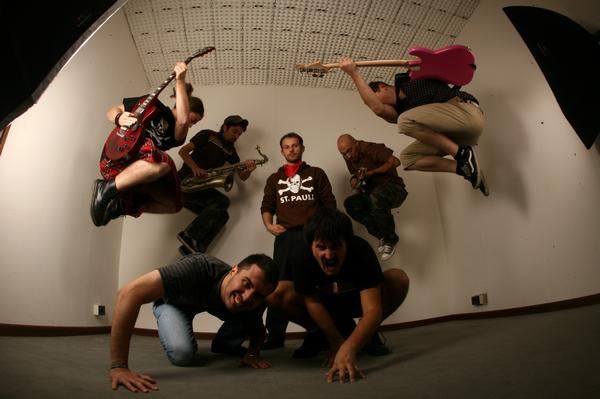 Talco's project starts off within December 1999 and January 2000 as a politic ska-core band composed of Tomaso (vocals + guitar), Daniele (guitar) and Nicola (drums). During their first period Rocco (guitar) takes over in while Daniele begins to play bass: the most important arrival is, though, the one of Riccardo at the trumpet. With him the band starts playing around, starting with a ska festival, in Lugo di Romagna (Ravenna., Italy). 11 live tracks are recorded in the month of October 2000 as a first raw demotape, followed in April 2001 by a studio recording (Lesder Studio, Mogliano Veneto): the 6 songs include the first year of the band, directed to a combat ska-punk, rappresented by bands like Clash, Banda Bassotti, Arpioni, Senza Sicura, Los Fastidios, Derozer, etc... In the same month Rocco, far from the band's ideals, leaves the band and Emanuele, old friend, politically and musically well syntonized with the rest of the group, takes his place. In the same period the wind section grows bigger, with Ilaria (tenor sax) and Davide (alto sax). This is the beginning of two years of concerts and socio-political interest. Here are some memories: Ponte nelle Alpi (Belluno): Talco open Alberto Camerini'show, playing a new song, "Tutti Assolti", written to protest against the absoved people of the "Petrolchimico" of Marghera, where 160 workers died bacause of the factories' pollution. They entertain the audience (300 people) for a hour, closing with the eternal "Bella Ciao".
In May-June 2002 the band play in many squats, also outside Venice. Talco present the newest song "L'Odore Della Morte", against war on Iraq and America's foreign politics in Irak, Cile, Latin America, ecc.
October 2002: friendship between Talco and comrades of C.P.O. Gramigna (Padua) begins. Gramigna is a squat in Padua, always in front line and socially pawned: big bands (like Senza Sicura) have their roots there. In that night Talco's show featured "Sessant'Anni", new track on Democrazia Cristiana, the italian party that ruled Italy until not so long ago. Together with C.P.O. Gramigna the band played in many other fantastic gigs (the band played with Malasuerte, punk-rock band from C.P.A. Firenze Sud; in Piazza dei Signori, Padua, for the Liberation Day from nazi scum, 25 april and more...). Two more great and unforgettable shows: the ones during a strike against Berlusconi's government. On both occasions Talco played in the middle of the crowd on a camion, followed by a moving procession.
Grown un in Marghera, city famous for pollution and death caused by Petrolchimico industries, Talco are in first line to rise against the situation: a gig in Marghera's square, with lots of people in memory of the dead workers of "Petrolchimico", remind their political and social pawn.
In September 2003 live shows are interrupted in order to record the first studio disc: 10 higly-politic songs. "Signor Presidente", against Berlusconi and, mostly, antifascist, is presented at the C.S.O.A. Zona Bandita (Venice) together with Marones, comrades from Perugia.
October 2004: the first cd "Tutti assolti" is out, produce by Kob Records and Black Butcher Records.
Talco are a strightly antifascist and against racism ska-punk band. They believe in music independence and in the message it has to send against every kind of discriminations.