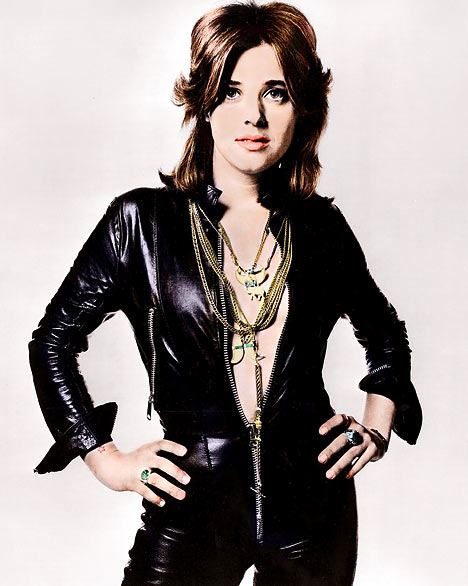 Suzi Quatro (born Susan Kay Quatro, June 3, 1950, Detroit, Michigan) is an American singer-songwriter, musician, radio personality, and actress. Suzi grew up in the States, experiencing the rock and roll revolution as it happened. She became an icon of the 70s glam rock era with her 'bad girl' image that went on to influence other female acts that arose in her wake, including The Runaways and L7. Known as "The Wild One" for her song of the same name, Suzi has prominently played the American originals of songs only meekly covered by British artists and many original rock classics, songs not allowed to escape onto the British airwaves of her airwaves due to the BBC's control.
A talented singer and bass guitarist, trained in classical piano and percussion, she joined her sisters in the 60s Detroit garage rock group The Pleasure Seekers whilst still in her teens and never looked back. By the early 70s, Suzi went off to England to work with producer Mickie Most, while her sister Patti joined the all-woman rock band Fanny. An underground following spread around Suzi's charisma and powerful singing.
Suzi found herself singing the material of songwriting duo Chinn & Chapman, musicians who were also having hits with Sweet. Combining shades of bubblegum pop with a hard rock spirit, similar to the power pop ethos of the era, Suzi embraced the glam sound. Under their tutelage, she had four top ten rock hits in the U.K., but she remained mostly unknown in the U.S.
However, her U.K. fame expanded through the 70s, with Suzi becoming a successful solo singer, bassist, and songwriter with a string of charting hits. Her appeal extended into the 80s while many of her contempoaries broke up. Notable songs of his period include "Can The Can", "Devil Gate Drive", "Tear Me Apart", and "The Wild One", among many others.
Suzi extended her career to television in 1979 when she guest starred for three seasons on the hit television series 'Happy Days'. She played the character Leather Tuscadero, who was the younger sister of Fonzie's love interest, Pinky Tuscadero. In 1979, at the height of the disco era, she finally made the U.S. Top Five with the track "Stumblin' In", a duet with Chris Norman.
In her musical career she has had 16 hit singles, sold over 45 million records and toured since 1964. She has also had guest appearances in the Runaways documentary "Edgeplay" and various UK television shows including Minder, Dempsey And Makepeace and Absolutely Fabulous.
In 1990, Suzi trod the boards in London's West End playing the lead in the musical Annie Get Your Gun and wrote and starred in a musical about Talullah Bankhead.
Suzi continues to write, perform and record her own original material and has a forthcoming new album Naked Under Leather. She also hosts an excellent show on BBC Radio 2.
Quatro's first single "Rolling Stone" did not achieve popularity anywhere except Portugal, where it made number one. Most introduced Quatro to the songwriting and production team Nicky Chinn/Mike Chapman. Her second single "Can the Can" (1973) was a number one hit throughout Europe and in Australia. It was followed up by three further hits: "48 Crash" (1973), "Daytona Demon" (1973) and "Devil Gate Drive" (1974) on RAK Records. Her first two albums were also European and Australian successes.
These recordings, however, met little success in her native U.S., despite tours in the mid-1970s supporting Alice Cooper, and, except in Australia, the popularity of Quatro's rocking glam rock declined from 1975. In the interim, she did enjoy success as a session player.
Quatro's fortunes did not change until 1978 when "If You Can't Give Me Love" became a hit in the UK and Australia. This did nothing to prompt Stateside success, but "Stumblin' In", a duet recorded that same year for RSO Records with Chris Norman of Smokie secured a #4 peak in the U.S. Both tracks featured on the "If You Knew Suzi" album. A year later, Quatro released "Suzi... And Other Four Letter Words". She called it her favourite album. This featured singles, such as "She's In Love With You", which made number 11 in the UK , "Mama's Boy" (34) and "I've Never Been In Love" (56). In 1980, her song "Rock Hard" was featured on the soundtrack of the cult film Times Square, along with some punk and new wave bands like Talking Heads, Ramones, XTC and The Pretenders. This success period proved brief however, and her last UK hit was "Heart of Stone" in late 1982. In 1985 Quatro collaborated with Bronski Beat and members of The Kinks, Eddie and the Hot Rods, and Dr Feelgood on the Mark Cunningham-produced version of David Bowie's classic "Heroes", released the following year as the 1986 BBC "Children In Need" single.
In December 2005, a documentary chronicling Quatro's life, "Naked under leather" directed by former Runaway Victory Tischler Blue appeared. In February 2006, Quatro released "Back To the Drive", produced by Sweet guitarist Andy Scott. The album's title track was penned by her former collaborator Mike Chapman.
March 2007 saw Quatro release a version of The Eagles' "Desperado", followed by the publication of her autobiography, "Unzipped".
Suzi Quatro has sold over 45 million records.
http://www.suziquatro.com