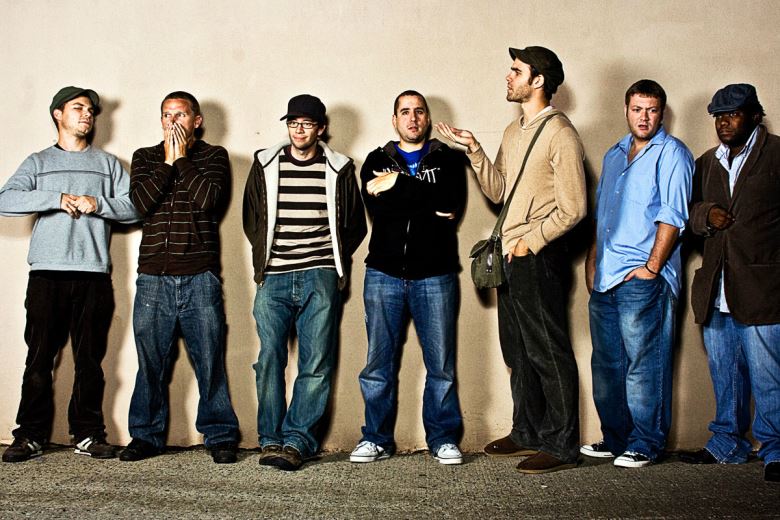 Streetlight Manifesto is a third wave ska punk band from New Brunswick, New Jersey, under the creative leadership of singer/guitarist Tomas Kalnoky. Since forming in 2002, the band has released four full-length albums.
Several of Streetlight's members were already well known among the New Jersey ska community for their roles in past ska bands from that area, most notably Catch 22's Tomas Kalnoky, James Egan, Mike Soprano, and Josh Ansley, as well as One Cool Guy's Stuart Karmatz, Pete Sibilia, Dan Ross, and Chris Paszik.
The band's first album, Everything Goes Numb, was released on August 26, 2003, and was distributed by Victory Records. They headlined their first ever show at Rutgers University on December 9, 2003 in front of a sold out audience.
The line-up has gone through several changes since the band's conception and currently consists of Matt Stewart on trumpet, Mike Brown on alto and baritone saxophone, Jim Conti on alto and tenor saxophone, Tomas Kalnoky on guitar and lead vocals, Pete McCullaugh on bass guitar, Nadav Nirenberg on trombone, and Chris Thatcher on drums.
Though the band has enjoyed little mainstream commercial success, they have received acclaim in alternative music circles, and their debut album is currently in Interpunk.com's top 100 items, over 2 years after its release. In addition, they regularly sell out their live shows, and their first few shows at Rutgers and The Stone Pony not only sold out, but had people coming from as far as Minnesota and Canada. Their second album, a reworking of Catch 22's Keasbey Nights was released on March 7, 2006.
Streetlight Manifesto's third album, entitled Somewhere in the Between came out on November 13, 2007. Rumors also have it that the band is currently working on a series of 8 albums entitled "The 99 Songs of Revolution" in co-operation with Bandits of the Acoustic Revolution, a side-project of singer Tomas Kalnoky slated for release in early 2009.
On November 17, 2009, the band's website announced that "99 Songs of Revolution: Volume One" has been ready for release for quite some time but "some record labels are just plain horrendous." They are also in the process of arranging a tour for 2010 but will spend some time in the studio until they have "a few records to release."
The first album of 99 Songs of Revolution was released on March 16, 2010. On this CD, the band covered songs by artists such as The Postal Service, Radiohead, and NOFX.
Band Members:
Mike Brown - Baritone Sax
Nadav Nirenberg - Trombone
Jim Conti - Tenor Sax
Matt Stewart - Trumpet
Chris Thatcher - Drums
Tomas Kalnoky - Guitar, Vocals
Pete McCullaugh - Bass
www.streetlightmanifesto.com