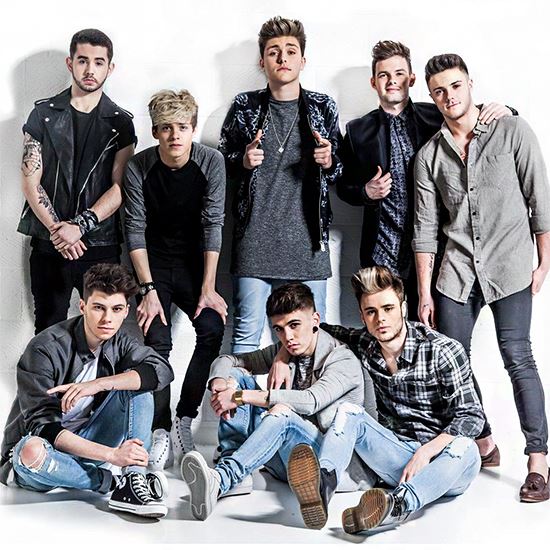 Created in the furnace of 2014’s X Factor, Stereo Kicks were launched on the world’s biggest music show as Britain’s hottest – and most numerous – new boy-band. In time-honoured fashion, each member of Stereo Kicks applied as solo singers and bowled over the judges in their own right at the auditions and made it to the gruelling Boot Camp. However it was here that the boys were told they’d be going no further. There were tears, there was heartbreak and disbelief, until in a glorious twist, they were called back into a room and told they were all going through... together as an eight piece!
Put together by Simon Cowell, the band gelled seamlessly into stars-in-the-making. Their bootcamp audition wowed audiences and judges with their spine tingling rendition of Snow Patrol’s ‘Run’, where Simon declared them as being “one of the best bands we’ve ever had in this competition”.
The boys sailed through to the live shows and captivated the nation with their heart-wooing harmonies on a string of covers, including Michael Jackson’s ‘You’re Not Alone’ and their now-famous medley of The Beatles’ ‘Let It Be/Hey Jude’, which instantly won them hundreds of thousands of diehard fans and saw them become one of the most tweeted about acts in the show’s history.
The Stereo Kicks’ Twitter army now stands at over 270,000, with over 10 MILLION views on YouTube, so it’s no surprise that they were also one of the most popular acts on the X Factor 2015 arena tour that followed earlier this year. As a result, the band went straight into their very own sold-out UK headline tour, which finished with a triumphant show at London’s O2 Islington Academy.
“It was insane,” Chris reminisces. “To do The X Factor tour was incredible enough, especially playing in all those Arenas, but doing our own tour, where people paid to come and see us – just us, no-one else – it was awesome and something we definitely want to keep on doing.”
And now, the eight-strong heart-throbs release their debut single ‘Love Me So’ this summer. Written by Stereo Kick’s very own Tom Mann, the soulful introductory anthem from the band is a bold statement with a rich sound and the kind of hooks that are way beyond their years.
“I’ve been writing songs for years,” says songwriter and resident joker Tom, “and when I put this forward as an idea to the boys they loved it. So I feel very honoured that it’s been picked as the first single. It also shows another side to us as a group, there’s not many boy bands that release self penned songs as the first single.”
‘Love Me So’ means a huge amount as the boys are determined to put their unique stamp on the pop landscape. “It’s a dream come true,” says James, “We’ve worked so hard since we were put together at Boot Camp and even when we left the competition we knew it wasn’t the end for us.”
There’s a drive in Stereo Kicks that reflects the mind-set of any organic band; they’re willing to work and graft to make themselves the biggest names in pop. “We know that just because we’ve got a single coming out, it doesn’t mean we’ve made it, “says Barclay, “We know there’s a lot more work to do but that makes it even more exciting.”
The band gets top marks for effort on all counts, something that youngest member and school boy Charlie still concentrates hard on as he continues to nail his GCSE studies after becoming a fulltime Stereo Kicks member. “The boys are more than used to me with my head in my books,” Charlie says, “I’m just glad I can now perform at all the gigs and be there. We can finally concentrate on being the band we know we can be.”
With the individual Stereo Kicks boys naming everyone from Ed Sheeran and Oasis to Elvis Presley as influences, there’s still an exciting road ahead to determining the definitive ‘Stereo Kicks’ sound. Casey hazards a good guess of where it’s likely to be heading, “It’ll be something cool and anthemic with a bit of pop thrown in, but it will definitely be something a little bit different to what’s out there at the moment.”
So it’s hugely exciting times for both the band and the Stereo Kicks fans, old and new, to take the plunge with them. “We can’t wait to get out there and continue our journey. We’re looking forward to taking lots of people on the ride with us, “ says northern lad Reece, “We’ve had amazing support and we hope that support will continue.”
On every date of Stereo Kicks’ headline tour the band’s fans were queuing around the block for hours to be first to the front with their new heroes, and the fan reaction to the new single when it was first played ensured that #LoveMeSo started trending worldwide on Twitter. With close to a million followers across their socials in under a year, Stereo Kicks are keen to keep connected and interacted with their fans.
“We love being able to talk to our fans,” says excitable, Jake, “Twitter, Facebook, Instagram - we’re in contact with them every way possible which is so cool. They tell us where we’re going to be half the time, but we all know that we wouldn’t be here without them. Their support is incredible and we can only hope that it will grow.”
With the backing of their army of fans, and ‘Love Me So’ already swooning the world, it won’t be long until every radio dial is tuned into the sound of Stereo Kicks.