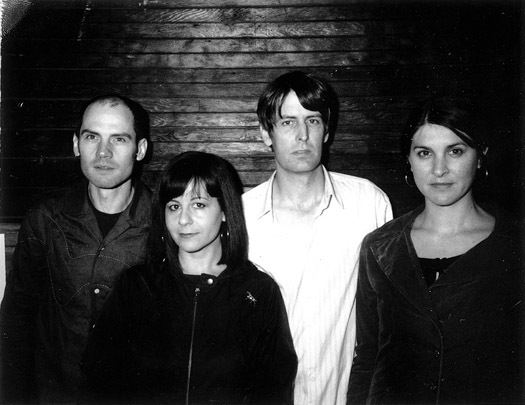 Stephen Malkmus and the Jicks are a rock band consisting of Stephen Malkmus (vocals, guitar), Joanna Bolme (bass, vocals), Mike Clark (keyboards) and Jake Morris (drums). The band has released six albums: "Stephen Malkmus" (2001), "Pig Lib" (2003), "Face the Truth" (2005), "Real Emotional Trash" (2008), "Mirror Traffic" (2011) and "Wig Out at Jagbags" (2014). Malkmus was the lead singer and primary songwriter for Pavement.
The Jicks formed in 2000 in Portland, Oregon, United States, almost immediately after Pavement's 1999 "hiatus" began. The group's first record - which had a working title of Swedish Reggae - was simply called Stephen Malkmus. It was released by Matador Records on February 13th, 2001. At least a few of the songs were proposed Pavement songs before the group disbanded.
The group made their official live debut at New York's Bowery Ballroom only a few weeks before their first record was released. Around this time, Pavement's auxiliary percussionist Bob Nastanovich began acting as The Jicks' manager.
Pig Lib was the name of the band's second record, which was released in 2003. The songs had a much looser yet darker feel, and the band sounds more comfortable playing with one another. Malkmus has since expressed regret in some of the decisions he made with putting certain songs on this record. The album received decent reviews, gaining 3/5 stars from Allmusic and an 8.0/10 from Pitchfork Media.
For the first several years of The Jicks' existence, no Pavement songs were ever played live. Then on May 23, 2003, spontaneously and without notice, the band opened the evening's show in Milwaukee, Wisconsin with "Summer Babe" from Pavement's Slanted and Enchanted album. What followed was a complete set of Pavement tracks in the chronological order that the band originally released them, playing roughly two-three songs per album. This concert has been dubbed by fans as The Milwaukee Show.
Notably, The Jicks opened up for Radiohead on the band's North American tour in support of their album, Hail to the Thief.
Face the Truth, credited only to Malkmus, came in 2005 to ecstatic reviews, many of them claiming a return to Wowee Zowee-type form. Most of the album was recorded by Stephen alone in his basement, although each member of the Jicks play on at least one song on the record. The band toured only a small amount behind this record, partially due to the fact that Malkmus had a new child.
On October 2nd, 2006, it was reported by Pitchfork that Janet Weiss, drummer of Quasi and the defunct Sleater-Kinney, had officially joined the band, replacing founding drummer John Moen, who left to be the drummer for The Decemberists.
On March 4th, 2008, their latest album "Real Emotional Trash" was released.
In 2011, shortly after recording their fifth album, it was announced that Janet Weiss had left the band. She was replaced by Jake Morris, formerly of Joggers.
On August 23, 2011, the album "Mirror Traffic" was officially released to generally positive reviews.