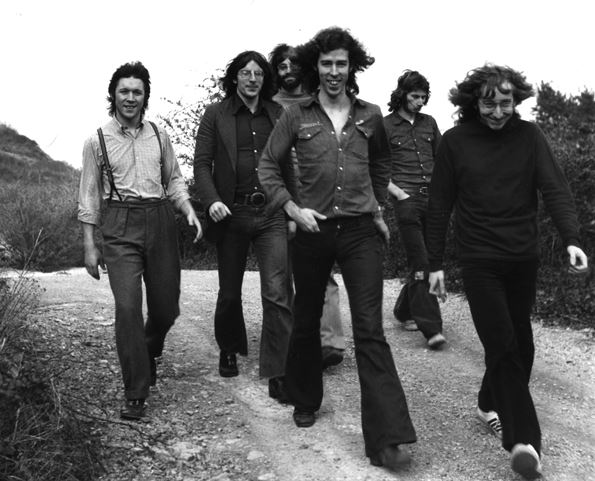 Stackridge are a West Country based group who were at the height of their success, such as it was, during the 1970s. Characterised by quirky humour and rhythmic, catchy, singalong tunes, the band gained a cult following which continues to this day.
Stackridge Lemon were formed in Bristol, UK from the remains of Griptyght Thynn by Andy Davis & Jim 'Crun' Walter during 1969. After initial experimentation and very lofty aims, the music began to arrive and the Lemon was dropped from the band's name. The band played its first London gig at The Temple on 6th February 1970. At this stage the classic lineup was settled: Andy Davis (vocals/guitar/keys/drums), James Warren (vocals/guitar/bass), Billy 'Sparkle' Blake (drums), Jim 'Crun' Walter (bass), Michael 'Mutter' Slater (vocals/flute / keys), and Mike Evans (vocals/violin).
During 1971 Stackridge began serious gigging, and Crun left to take up bricklaying. The group embarked on a U.K. tour supporting Wishbone Ash. Later in the year they signed to MCA Records, and recorded their first album, Stackridge, at Kingsway Studios, London. They then toured the U.K. as headliners, with Renaissance supporting.
The second album, Friendliness, was recorded in November 1972; Crun rejoined the band.
Their third album, The Man in the Bowler Hat was recorded in Air Studios, London with producer George Martin. Llike the first two albums, it failed to sell in large quantities.
After other band changes in 1974, James and Crun were replaced by Paul Karas (bass) and Roy Morgan (drums), Keith Gemmell, and Rod Bowkett (sax and keyboards) joined. Their fourth album, Extravaganza was recorded at Air Studios with Tony Ashton producing, followed in 1975 by Mr Mick, recorded at Ramport Studios, Putney. In 1976 Peter Van Hooke replaced Roy Morgan on drums.
Stackridge performed a final show in April 1976, and shortly afterwards the band ceased to exist, although Rocket Records released the compilation album Do the Stanley later that year.
During 1996 talks were held between original members about a possible reunion, and recording actually starts. The following year, Stackridge - The Radio One Sessions was released by Strangefruit.
By 1999, after a slow start, Something for the Weekend was released, featuring the line-up; James Warren, Jim 'Crun' Walter, Mike Evans, Richard Stubbings, John Miller, Ian Towers, and Tim Robinson.
Then in 2001 Live at Croperdy and The Original Mr Mick were released on Dap Records. The band split for the second time in 2001.
In 2005 Sex and Flags was released, a compilation of tracks previously released on Something for the Weekend plus eight new tracks.
In 2007 Stackridge returned to touring with the original lineup
of: Andy Davis, James Warren, Michael 'Mutter' Slater, Jim 'Crun' Walter, and Sarah Mitchell.
In 2009 the band released a new album, A Victory for Common Sense.
Official website www.stackridge.net.