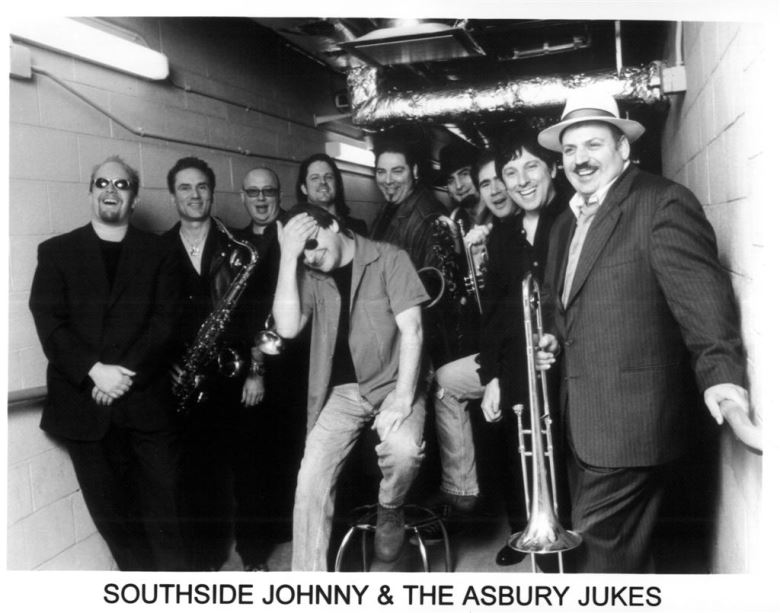 Southside Johnny & The Asbury Jukes are an American band from the Jersey Shore and led by Southside Johnny. They have been recording albums since 1976 and are closely associated with Bruce Springsteen & The E Street Band. During the bands formative years Steve Van Zandt (sometimes known as Miami Steve Van Zandt, sometimes as Little Steven) acted as the band's co-leader, guitarist, songwriter, arranger and producer while other E Streeters including Clarence Clemons, Max Weinberg, Garry Tallent, Ernest Carter, Patti Scialfa and Soozie Tyrell have all performed, toured and/or recorded with the Jukes. The band's horn section - The Miami Horns - has also toured and recorded with Springsteen. More than one hundred musicians can claim to have been members of The Asbury Jukes, including Jon Bon Jovi who toured with the band as a special guest during 1990.
Southside Johnny (real name John Lyon, born December 4, 1948 in Neptune, New Jersey) is an American singer, harmonica player, and songwriter, who usually fronts his band The Asbury Jukes.
Lyon grew up in Ocean Grove, New Jersey and graduated from Neptune High School. As an artist, Southside Johnny first achieved prominence in the mid-1970s as the second act to emerge from the Jersey Shore music scene and be considered part of the Jersey Shore sound, following Bruce Springsteen. Southside's first three albums, I Don't Want to Go Home (1976), This Time It's For Real (1977), and Hearts of Stone (1978), were Stax-influenced R&B arranged and produced by the co-founder of the band and Springsteen confederate Steven Van Zandt and largely featured songs written by Van Zandt and/or Springsteen. The Van Zandt-written "I Don't Want To Go Home" became Southside's signature song, an evocative mixture of horn-based melodic riffs and sentimental lyrics. Other notable songs included "The Fever","Talk to Me," "This Time It's For Real," "Love on the Wrong Side of Town," and the definitive version of Springsteen's " Hearts of Stone."
Southside has long been considered the Grandfather of "the New Jersey Sound." Jon bon Jovi has acknowledged Southside as "his reason for singing."
In 1982 the Rolling Stone Magazine voted the album Hearts of Stone among the top 100 albums of the 70's and 80's.
Cast under Springsteen's long shadow, national commercial success eluded Southside and the Jukes, and in 1979 they were dropped by their record company. Now working without Van Zandt, they released The Jukes in 1979 and Love is a Sacrifice in 1980. Neither of these achieved much success either. The band's first official live release also came out in 1980, the double album Reach Up and Touch the Sky.
During the 1980s Southside Johnny's recording contracts continued to change almost by album, but he continued to release records: Trash It Up (1983), a disco influenced album written by Billy Rush and produced by Nile Rodgers; In the Heat (1984) an album trying to reach out to "Adult Oriented Radio"; and At Least We Got Shoes (1986) where guitarist and Jersey shore fixture Bobby Bandiera, who often plays a custom guitar built by First Act Guitars took over songwriting and guitar work from Billy Rush and led the Asbury Jukes back to their original sound. Songwriting credits on At Least We Got Shoes also contain a song co-written by Bandiera and singer Patti Scialfa, who was known as a Jukes collaborator since the 1980 album Love is a Sacrifice and who became a member of Bruce Springsteen's E Street Band in 1984.
In 1988 Southside Johnny released his first solo record Slow Dance containing ballads and love songs, but also "Little Calcutta" which is still discussed as Southside's most political song of his career, describing the life and environment of the homeless in New York City.
More record label switches, Jukes personnel changes, tours and club dates followed.
Jukes' recording career was re-launched with the album Better Days (1991), which featured production by Van Zandt, songs by Springsteen, and vocal performances from Van Zandt, Springsteen and Jon Bon Jovi. With Bobby Bandiera driving the band, the Jukes were gaining new energy for a world wide tour supporting the album. But once again, Southside Johnny's bad luck with the industry was shown when the record label went bankrupt while the tour was still rolling.
Southside performed the theme song for the 1990s sitcom Dave's World, a cover of Billy Joel's "You May Be Right."
Southside eventually relocated to Nashville taking a break from the music business. A few members of the Asbury Jukes would end up being part of The Max Weinberg 7 on the Late Night with Conan O'Brien television show, while some others went on tour and into the recording studio with artists like Jon Bon Jovi, Mink DeVille, Graham Parker, Robert Cray.
In 1998 Southside Johnny came back into the spotlight with an independent release titled Spittin' Fire, a live record with a semi-acoustic Jukes lineup released in France containing a 20 song set recorded during a series of 10 shows at the "Chesterfield Café" in Paris, France.
After a decade without a record contract Southside finally founded his own record label in 2001 under the name of Leroy Records, and started releasing and distributing his new records fully under his own control: Messin' with the Blues (2000), Going to Jukesville (2002), Missing Pieces (2004), Into the Harbour (2005).
Southside continues to perform, and maintains substantial audience followings in some regions of the U.S., such as New Jersey, New York, northeast Ohio, and abroad, in the UK and continental Europe, as 2002's Live At The Opera House DVD, filmed at a sell-out performance in Newcastle upon Tyne, demonstrates. As of 2005, he resides on the Delaware Bay. His annual appearances at Springsteen's Asbury Park holiday shows draw as much crowd excitement as Springsteen himself.