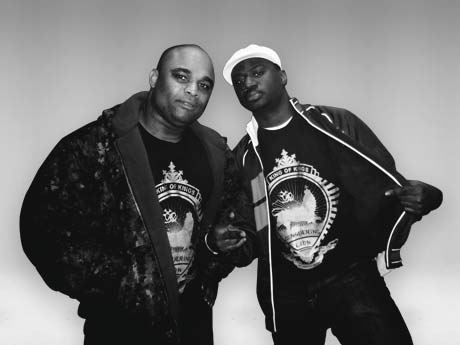 “When it comes to knowing what mashes a dance, few production outfits can match South Rakkas Crew.”—Pitchfork
“South Rakkas Crew make some of the most electrifying dance music on the planet.”—The Guardian
Diplo and ‘N Sync? Deerhoof and Elephant Man? Tricky and Michael Jackson? M.I.A and Thom Yorke? Just one name links up this diverse, groundbreaking posse: forget Kevin Bacon—when it comes to six degrees of the most cutting-edge music production out there, there’s only South Rakkas Crew.
Rugged dancehall, shameless pop, hipster electro bangers, rude dubstep—fuck it, South Rakkas does it all. A duo comprised of Dennis “D-Rakkas” Shaw and Alex Greggs, South Rakkas took an unusual path to become the dons of today’s digital funk. South Rakkas first gained fame for their blazing dancehall riddims (“Clappas,” “Red Alert,” “Bionic Ras,” “Chinkuzi” anyone?), which brought production work for stars like Mr. Vegas, Elephant Man. But it’s not for nothing that XLR8R recently praised South Rakkas for their “boundary-pushing” powers; indeed, these futuristic rhythm killers can’t be held down to any one sound or style. SRC can flex from Beenie Man and Bounty Killer one moment, T-Pain the next, and then on to the likes of M.I.A., Lily Allen, Beck, Duran Duran, Justin Timberlake, The Bug, Warrior Queen, Britney Spears, and Shakira—all of whom have been touched by South Rakkas’ edgy studio savvy. Those skills came about when Shaw and Greggs met up working at the same recording studio. Both had roots in the local hip-hop/reggae scene: Greggs created beats for local rap groups and, erm, Barenaked Ladies, while Shaw spent his youth as charismatic, party-starting DJ (“Rakkas” is in fact a local West Indian slang term for “rockers” reggae music that Shaw used to put on his DJ flyers to indicate his parties’ music policy). The concept for SRC first hatched, though, when Shaw and Greggs moved to Orlando, Florida to become a crucial part of ‘N Sync’s production team. There, the pair decided South Rakkas Crew, would combine both their strengths. The plan was simple: Greggs would hold down the pop/dance production side in Florida (his work with the archetypal boy band on smash albums like Pop would catapult him into the pantheon of platinum-plated star producer/mixer/remixers); Shaw, meanwhile, would travel to ruffneck Kingston, Jamaica, where an introduction from his brother-in-law Mr. Vegas gave him access to dancehall’s top talent. Rakkas’ first riddim, “Clappas,” quickly proved a major island smash, paving the way for many more; Jamaican and non-Jamaican audiences alike also appreciated SRC’s talent for fusing hook-laden song structure with sound-system destroying beats.
This unique combo of hit-making production and arrangement with hard-hitting dancehall sonics set the stage for SRC’s inevitable global takeover. While South Rakkas keeps a foot in the pop game—Greggs was working with Michael Jackson on new material before the King of Pop died, and recently remixed the likes of Beyoncé, Kelis and LMFAO—they’ve also been acclaimed by the underground and critics alike. When beat king Diplo put out South Rakkas’ Mad Again and The Mix Up eps on his Mad Decent label, the blogosphere proved unanimous in its praise: Prefix raved about Mix Up’s “production perfection,” while Thom Yorke recently dropped the Boy 8-Bit mix of “Mad Again” while guest DJing on Gilles Peterson’s BBC radio show. Trip-hop titan Tricky also recently chose SRC to remix his entire West Knowle Boy album, garnering rapturous press. According to The Independent, SRC “transformed it into a high-voltage electro and sublime space-disco monster. In fact, Knowle West Boy is barely there, but something fantastic has appeared in its place”; as well, the BBC called it “a collision of exotic and intoxicating rhythms that dance around truly body-rocking beats, hammered and glued into forms that enthrall and excite… Tricky Meets South Rakkas Crew is an electrifying listen, invigorating the parts Tricky can’t usually reach.”
SRC remains as prolific as ever. In 2010, Shaw and Greggs dropped a brand new, sixteen-track South Rakkas album, The Stimulus Package, as a free download, again via Mad Decent. Stimulus proved a classically iconoclastic SRC move: it featured, of course, expected cameos from dancehall mega-celebs like Capleton, Serocee and Mr. Agony, but mixed with surprises like vocals from Satomi Matsuzaki of indie-noise gurus Deerhoof and Mylo’s “Drop The Pressure” transformed into a dubplate riddim! Critics again united in unanimous admiration: The Fader said “South Rakkas Crew wants to start 2010 with energy. The Stimulus Package brims with their brand of rugged ragga that is laced with songs that could be heard at an all-night dance party at some club we’ve never been to in Madrid”; notable blog True Genius Requires Insanity stated “On The Stimulus Package, the South Rakkas Crew don't just throw down the gauntlet in dancehall, but kick open doors in dubstep and electro…
South Rakkas Crew do everything on this album short of painting a sign that they are THE experimental force in dancehall music… A superb body of work by superb and veteran producers and remixers.”
The Stimulus Package marked only the beginning of SRC’s plan for world domination in 2010. They unveiled their live experience, touring for the better part the year following a string of massively successful Australian festival tour dates in 2009; as well, M.I.A personally selected South Rakkas to open her N.E.E.T. label showcase.
After almost a year’s hiatus South Rakkas reemerges, in classic SRC form, only better, stronger, faster. Mad Decent drops a celestial bomb at the end of summer’s 2011 with the release of their most anticipated project to date, Gangsta Revival. Shaw steps out on this one, producing 7 of the eps 8 songs; carrying South Rakkas into a new realm with his distinctive approach to Dubstep, Moombahton and of course their classic style Electro-Dancehall burners. It’s all in a day’s work for South Rakkas: for the most crucial, next-level sounds out there, there is no substitute.