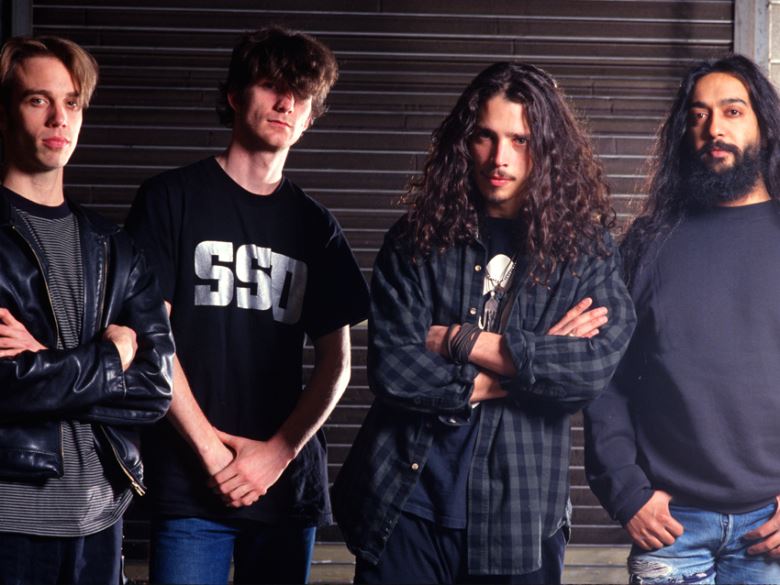 Soundgarden is a Seattle rock band who helped to define the sound that came to be called grunge. Despite starting years earlier, and having a sound that more closely resembled Black Sabbath or Led Zeppelin than their contemporaries, they are considered one of the "big four" of the '90s Seattle grunge bands, along with Alice In Chains, Nirvana and Pearl Jam.
The band was formed in 1984 by Chris Cornell (vocals, and originally drums) and Hiro Yamamoto (bass), to be joined later by Kim Thayil (guitar) and Scott Sundquist (drums). Thayil joined the band after moving to Seattle from Illinois with Yamamoto and Bruce Pavitt, who would later start Sub Pop Records. Scott Sundquist, who left in 1986 to concentrate more on his family, was replaced on drums by Matt Cameron. Yamamoto was replaced by Jason Everman on bass after the release of 1989's Louder Than Love. Jason Everman was quickly replaced by Ben Shepherd, who remained with Soundgarden for the rest of its life-span.
Break-up:
Soundgarden disbanded in 1997, following an aborted tour in support of their album Down on the Upside, as a result of increasing tensions within the group. Cornell went on to pursue a solo career, releasing a solo album, Euphoria Morning. He subsequently went on to form Audioslave with former Rage Against the Machine members Tom Morello, Tim Commerford and Brad Wilk, while Cameron subsequently joined Pearl Jam, replacing Jack Irons on drums.
The band was named after an outdoor art/sound installation called the "Sound Garden," located on NOAA property near Seattle's Magnuson Park, which makes eerie sounds when the wind blows.
Soundgarden would often utilize alternate tunings and odd time signatures in their songs. Many Soundgarden songs were performed in drop D tuning, including "Jesus Christ Pose", "Outshined", "Spoonman", and "Black Hole Sun". The E strings of the instruments were at times tuned lower, such as on "Rusty Cage", where the bottom E string is tuned all the way down to B. Some songs use more unorthodox tunings: "My Wave" and "The Day I Tried to Live" are both in a E-E-B-B-B-E tuning. Soundgarden's use of odd-meter time signatures was varied as well; while such songs as "Jesus Christ Pose" are in typical 4/4 time, "Black Hole Sun alternates between 4/4 and 9/8, "Outshined" is in 7/8, "My Wave" uses 5/4, "Never The Machine Forever" is in 9/8 and "Spoonman" alternates between 7/8 and 4/4 sections. Kim Thayil has said the band usually did not consider the time signature of a song until after they had written it, and said that the use of odd meters was "a total accident."
Reformation:
On January 1, 2010 Chris Cornell announced through a twitter feed; "the 12 year break is over & school is back in session" sealing the fact that all four members of Soundgarden, circa 1997, would be reuniting after a 12 year hiatus.
On April 15, 2010, it was announced that Soundgarden would play its first show since 1997 the following day at the Showbox at the Market in the band's hometown of Seattle. On April 16, an email went out to random Soundgardenworld.com newsletter subscribers with a link to purchase tickets. The show was billed under the pseudonym 'Nudedragons', an anagram for Soundgarden. Tickets sold out in just 15 minutes In addition, a contest was posted on the Soundgarden twitter page, giving one fan a chance to win a ticket to the show.
The Live To Rise Songfacts reports that Soundgarden's first new song in 15 years was debuted via Seattle rock station KISW on April 4, 2012. Live To Rise is a midtempo track that was written by the band specifically for the soundtrack to Marvel's The Avengers film.
On September 27th, 2012, Soundgarden released "Been Away Too Long," the first single from their new album "King Animal." The long awaited album was released on November 13th, 2012.