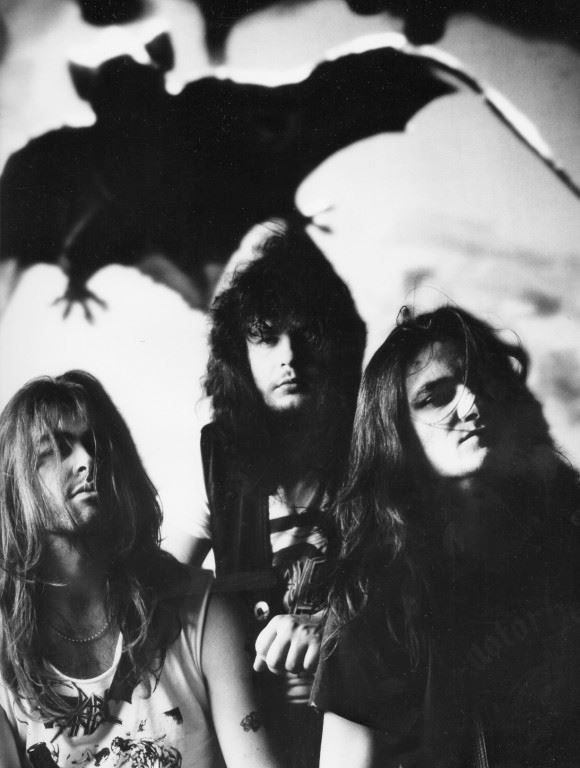 Sodom is a German thrash metal trio from Gelsenkirchen, formed in 1981. Along with the bands Kreator, Destruction and Tankard, Sodom is considered one of the "The Big Teutonic Four" of Teutonic thrash metal.
The band was formed by Tom Angelripper and Aggressor in 1981 in the Western German industrial town of Gelsenkirchen. Initially, they were mostly influenced by bands like Motörhead, Tank, Raven, and Venom. Sodom's own music style would greatly influence many late-1980s and early-1990s thrash and black metal bands, among others.
They soon found a drummer called Bloody Monster who was, however, quickly replaced by Chris Witchhunter, with whom they released two demos, "Witching Metal" and "Victims of Death" in 1982 and 1984, before signing a deal with SPV GmbH. After a gig in Frankfurt in 1984 (with Destruction and Tankard) Manfred Schütz of SPV GmbH came to the band and spoke the legendary sentence "You guys are so bad, you will sell a lot of records!". This led to the recording of their debut EP "In the Sign of Evil". Missing was Aggressor, who had meanwhile left the band. He was replaced by Grave Violator (recommended to the band by Kreator's Mille Petrozza), who also wouldn't stay very long. In his place, Michael Wulf joined, just to leave the band shortly after the recordings of their first full-length album "Obsessed by Cruelty" in 1986 to join Kreator (where he would last only one show). Michael Wulf died in a motorcycle accident in 1993.
After "Obsessed by Cruelty" was released, the band abolished their satanic image and replaced it with the (pacifistic motivated) war theme that can be found on most of Sodom's records. With their new guitarist Frank Blackfire, the most legendary Sodom line-up recorded two albums (plus a live album, "Mortal Way of Live", the first of various Sodom releases which had a censored cover in Germany): "Persecution Mania" (wich was the first Sodom album produced by the band's long-time producer Harris Johns, and also had the first cover that featured the band's mascot "Knarrenheinz") and "Agent Orange" (including the single "Ausgebombt"). This album made Sodom the first German Thrash band to ever enter the charts (it reached number 36 on the German Media Control charts).
Blackfire left in 1989 (like Destructor before he joined Kreator) and was replaced by ex-Assassin guitarist Michael "Micha" Hoffmann.
In 1992 Tom fired Chris Witchhunter, who had alcohol problems. Atomic Steif, who would stay in the band until 1996 (and is, like many former Sodom members, still embittered that Tom fired him) became the new drummer.
From 1997 to 2010, Sodom had a consistent lineup consisting of Tom Angelripper, Konrad "Bobby" Schottkowski (Crows) and Bernemann. In 2001 Tom, who meanwhile also released various solo albums as Onkel Tom Angelripper, has been awarded double platinum for more than 1.000.000 sold Sodom albums.
Sodom collaborated with famous German schlager singer/actor Roberto Blanco in 2011, making a commercial intended to raise awareness of Alzheimer's disease. He also joined them on stage at various gigs (including Wacken 2011) for a metal rendition of his song 'Ein bisschen Spaß muss sein'.
Current members:
* Tom Angelripper (Thomas Such, Onkel Tom) - Vocals/Bass (Desperados)
* Bernemann (Bernd Kost) - Guitars (ex-Crows)
* Markus Freiwald
Former members:
* Aggressor (Frank Testegen) - Guitars (1983-1984)
* Grave Violator (Pepi Dominic) - Guitars (1984-1985)
* Destructor (Michael Wulf) - Guitars (later Kreator) (1985-1986) R.I.P. in 1993.
* Assator (Uwe Christophers) - Guitars (ex-Darkness) (on tour in 1986)
* Frank Blackfire (Frank Gosdzik) - Guitars (later Mystic) and Kreator) (1987-1989, special appearance in the December 28, 2006 concert in Bochum)
* Uwe Baltrusch - Guitars (on tour in 1989/1990) (also in Mekong Delta, later House of Spirits)
* Michael Hoffman - Guitars (ex-Assassin) (1990)
* Andy Brings - Guitars (later Powergod) (1991-1995)
* Strahli (Dirk Strahlimeier) - Guitars (1995-1996)
* Chris Witchhunter (Christian Dudek) - Drums (1983-1992) (see also Destruction and Bathory)
* Atomic Steif (Guido Richter) - Drums (later Stahlträger and Assassin), ex-Sacred Chao, ex-Holy Moses, ex-Living Death, ex-Brotós) (1992-1996)
* Bobby Schottkowski - Drums (ex-Crows, ex-Onkel Tom Angelripper) (1997-2010)
Official website:
www.sodomized.info
2) ＳＯＤＯＭ were an early-mid 80's Japanese punk group, who played mid-speed hardcore punk. Their style takes cues from The SS, Discharge, Typhus, as well as American hardcore. They have one tape (Sodom & Requiem) and were featured with 7 songs on the ADK Omnibus Vol.1 compilation.
Fansite:
www.sodom.hu