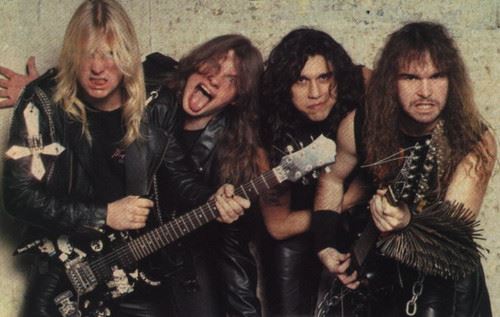 Slayer is a thrash metal band from US, formed in 1981. The band was founded by guitarists Jeff Hanneman and Kerry King. The band was credited as one of the "Big Four" thrash metal bands, along with Metallica, Anthrax, and Megadeth.
Slayer's musical traits involve fast tremolo picking, guitar solos, double bass drumming, and shouting vocals. The band's lyrics and album art, which cover topics such as death, deviants, suicide, genocide, necrophilia, insanity, Nazism, religion, Satanism, serial killers, and warfare have generated album bans, delays, lawsuits and strong criticism from religious groups and the general public. Slayer is best known for speaking through perspective without being necessarily sympathetic to the cause of their inspiration.
Since their debut record in 1983, the band has released two live albums, one cover album, one box set, three DVDs, one VHS, two EPs, and eleven studio albums, four of which have received gold certification in the United States. The band has received three Grammy nominations, winning one in 2007 for the song "Eyes of the Insane", and one in 2008 for the song "Final Six". They have headlined music festivals worldwide, including Unholy Alliance and Ozzfest.
Slayer was formed in 1981 in Huntington Park, Los Angeles, California. The Band was formed by guitarists Jeff Hanneman and Kerry King when they met at a tryout for a local band. Tom Araya soon joined on bass and vocals, and drummer Dave Lombardo joined last later in 1982. They played in a style reminiscent of early Exodus, influenced heavily by punk acts Minor Threat, Stooges and Heavy Metal bands Venom and Judas Priest.
"Black Magic", the heaviest, darkest, and most evil song at the time (according to some), was written in February, 1983, and marked Slayer's definite venture into thrash metal. They secured a spot on the compilation appeareance "Metal Massacre III" in 1983, contributing the speed metal song "Aggressive Perfector". They also recorded two demos in 1983, and became a popular live act in the Los Angeles area. (In 1983, Bob Gourley filled in for Dave for one gig. He later appeared in Dark Angel (US).) Their debut LP, Show No Mercy, was recorded in November, 1983.)
A live EP was recorded in the studio in front of 50 of their closest friends in January, 1984, and after that "Show No Mercy" was released. The "Haunting the Chapel" and "Live Undead" EPs followed.
After 1985's "Hell Awaits", Slayer were signed to Rick Rubin's Def Jam record label, better known for acts like Run DMC. This led to three studio albums, including the brutal "Reign in Blood", as well as a 1991 live double CD, "Decade of Aggression".
Dave Lombardo left the band in 1987 for several weeks, and was replaced for a few live gigs by Tony Scaglione (Whiplash (US)), and then again left in 1992. Finally, in 1994, Paul Bostaph from Forbidden was brought in, and three more albums were recorded.
Then, in 2001, Bostaph left to join Systematic, and Lombardo, who had been in Grip Inc. and Fantomas rejoined the band.
Interesting facts:
It's official that Slayer is the most covered metal band in the world aside from Metallica and Iron Maiden.
Tom Araya (born Tomas Enrique Araya June 6, 1961 in Vina del Mar, Chile. He has provided guest vocals to recordings by other artists, including "Iron Gland" from Alice in Chains' album Dirt, and "Terrorist" from Soulfly's album Primitive. His brother is John Araya (Bloodcum (US), Thine Eyes Bleed)
Kerry King recorded a guitar solo for "No Sleep Til' Brooklyn" by the popular hip-hop/rock group Beastie Boys.
Tom Araya's brother John (Bloodcum (US), Thine Eyes Bleed) worked as an sound engineer for Slayer in their early days.
According the book of Jarek Szubrycht (Lux Occulta) "Bez litosci. Prawdziwa historia zespo?u Slayer", Greg Hall was asked to play with Slayer after Tony Scaglione left the band in January 1987. It never happens because Lombardo returned to the band.
Gene Hoglan, the legendary drummer who has played in bands such as Dark Angel (US), Strapping Young Lad and Death, used to be a Slayer lights man and roadie on the Show No Mercy tour, and was asked to be Dave Lombardo's drum tech on the Haunting North America tour ('84), but knocked it back to pursue his own music career. He even did backup vocals on the album Show No Mercy (the song Evil Has No Boundaries).
Birth Dates:
Tom Araya (06 June 1961 Vina del Mar, Chile)
Jeff Hannemann (31 January 1964 Oakland, CA)
Kerry King (03 June 1964 Los Angeles, CA)
Dave Lombardo (16 February 1965 Havana, Cuba)
Paul Bostaph (26 March 1964 Newark, CA)+
Rumor has it the band was originally known as Dragonslayer, after the 1981 movie of the same name. However, when King was asked "How did you come up with the name Dragonslayer?" King responded "We never did; it's a myth to this day."