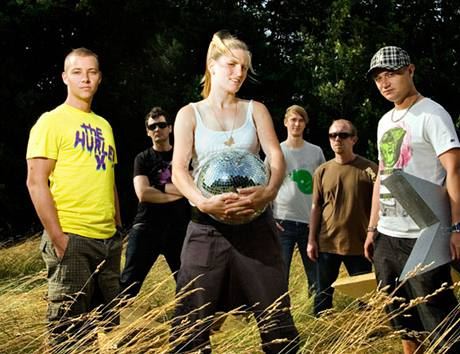 There are more than one band called Skyline
.....
1. Czech Band
The wildest electronic band from Czech Republic formed around 1997 in Prague. Their actual career began at the legendary Jeleni prikop festival, where they gave a very successful concert before such stars like 808 State or The Orb. Their style was originally defined as a connection of drum'n'bass/breakbeat and pop but today Skyline call it urban pop...
The debut album Riders In The Store was released in 2001 (Intellygent Recordings) and Skyline became the part of music scene around Prague´s famous club Roxy. Album Urbanica (U:Bahn Records) followed in spring 2004 with hit singles Rhythm Hackers and Step On the Gas.
Skyline were and always will be mainly a live band: playing live is the most important part of this band. Anyway, it is not a co-incidence that they were awarded with couple of prizes for the best live act Dance Awards 2004 and 2005 and also ALMA Awards 2005.
Skyline play regularly at most of the important Czech festivals (Love Planet, Rock For People, Summer Of Love, Trutnov), in 2005 they supported the legendary Underworld and also have experience in playing abroad - Poland, Germany, Portugal and also prestigious Eurosonic Festival 2006 (The Netherlands), which is a presentation of the most promising new acts from Europe.
In March 2006 Skyline released their ambitious third album called Virginplatonicpanic (X Production). Album was produced by a talented producer Ecson Waldes and was mastered at Wiseloord Studios, The Netherlands. We wanted to do powerful and catchy record, where every song could be a potential single. There's no space for boredom, say people from Skyline. And yeah, they're right!
offical page.: http://www.skylineweb.cz/
.....
2. Obscure German Jazz Rock Outfit.
Skyline were born out of the demise of Virus by Jürgen Kochbeck (aka George Kochbek) and are interlinked with various other bands. Their album, however (unheard until 2006), has to be one of the most disappointing rarities of the Krautrock scene, as a lightweight pop and soul oriented mixture, with only a couple of instrumental tracks that shine.
For many years, all we knew were their live recordings, which saw winds and keyboards added, they had become a potpourri of Euro jazz-rock genres, with all sorts of influences. Not so typically German, with hints of Scandinavian, French and Canterbury styles, they come across as a vibrant and highly creative outfit. A second album then could have been so much better, maybe, but instead they split-up. After their demise George Kochbek went to Es, and Michael Stickdorn went on to Cyklus.
.....
3. "Skyline" is also the handle of United States demoscene musician Aaron Leibrick whose tracks appear on Last.fm.
....
4. Skyline are Ken Kaplan on trumpet & flugelhorn, Jeff Jorgenson on sax, Jim Cox on piano & synthesizers, Tom Child on bass, Michael Rosati on guitar and Chad Wackerman on drums, plus Dave Levin on percussion and Kevin Nadean on synthesizers. The group disbanded after the album "Before the Dawn" recorded in 1980 at Overland Studio, Costa Mesa, California and released under the "Accord" records label in 1981. The album is a rarity these days. The style it sounds is an early 80's smooth jazz-fusion.
....
5. Skyline were a 3-piece rock band from the Tampa Bay area that formed in 2000. Their members were Alan Relkin on guitar, bass, vocals and keyboards, Josh Greenberg on guitar, bass, vocals and keyboards and Nathan Jaye on drums, percussion and vocals. They played together for 3 years and amicably disbanded in 2003.
....
6. Skyline is also the main project of (Last.fm:) fmforhthought who produces experimental, ambient electronic music.
Official Site: www.skyline.xmattdh.co
....
7. A newgrass group active in the 1970s and 80's headed by Tony Trischka. The band consisted of Tony, Danny Weiss on guitar and vocals, Dede Wyland on guitar and vocals, Larry Cohen on bass, and Barry Mitterhoff on mandolin. In the last year of their career Dede Wyland was replaced by Rachel Kalem. They are credited with pioneering (along with The New Grass Revival) the "newgrass" sound and for jazz-infused riffs and extensive use of harmony in their singing.
albums :
1977 Skyline Drive ~ discogs
1981 Late To Work ~
1984 Stranded in the Moonlight ~ discogs
1989 Fire of Grace ~
1999 Ticket Back ~