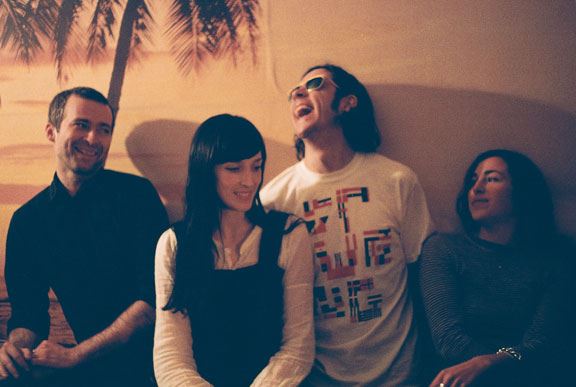 Sian Alice Group have a talent for artfully wrought, wholly realized compositions. Founded in the rock tradition, but adorned by the orchestral, the band unifies its members’ varied backgrounds in to a cohesive whole, underpinning it all with the ethereal beauty of Sian Ahern’s voice. They have an instinctively experimental approach to their songwriting, and take in elements of rock, modern classical, soul, improvisation, free jazz and dance to create a mix that sounds both organic and completely original.
At the heart of Sian Alice Group are multi-instrumentalists Rupert Clervaux, Ben Crook and vocalist Sian Ahern. The three formed the group in late 2006. Rupert and Ben have both honed their crafts through different outlets in and around London for nearly ten years, Clervaux as a producer and engineer (he is currently working with J. Spaceman, Alexis Taylor, Spring Heel Jack and Treader records), and Crook working on a series of home recordings under the name 40,000 Ghosts. Having talked about collaborating for years, the two teamed up with vocalist Ahern to form Sian Alice Group. With a grandiose sound in mind, Sasha Vine was added on violin and piano.
In the beginning of 2007 Sian Alice Group played their first live show in Copenhagen and followed it with two shows opening up for Spiritualized in the UK. This was followed by some US shows and the release of a 7”, Nightsong, on The Social Registry in the summer of 2007. The group spent much of the remainder of 2007 working on their debut album 59.59. In February 2008 it was released it in North America to universal acclaim and supported with a US tour, and showed them blooming to a six piece with the inclusion of Americans Eben Bull and The Social Registry label-mate Mike Bones, a line-up that still stands today. 59.59 is at once a collection of songs and also a single unit, a free-flowing, amorphous and organic body spanning 59 minutes and 59 seconds. It is a complex record that moves through traditional pop songwriting and dynamic instrumental composition while being tempered with studio improvisation. At a time when the musical landscape seems inundated with derivative retrogressive guitar bands, or acts reliant on sequenced beats and oscillator knobs, Sian Alice Group’s more classical inclinations show their willingness to tread their own path. The record features contributions from Douglas Hart (The Jesus & Mary Chain), John Coxon (Spring Heel Jack) and Brian DeGraw (Gang Gang Dance). NME calls 59.59 a “stunning debut album,” that is “always breathtaking” while All Music Guide says it is "an astounding album, quite unlike anything one’s heard before.” In their “Recommended” review Pitchfork had this to say: "charts transformations from psychedelic rock, pastoral folk, and piano-lounge balladry into analog-synthtronica, free-jazz breakdowns, pounding Afro-tech grooves, and avant-classical composition."
In May 2008 59.59 was released in the UK, and Sian Alice Group headed out on the road for two tours, one with Spiritualized and the other with The Black Angels. In June 2008 the group released The Dusk Line, a four-track EP that was recorded during the sessions for 59.59 and which features tracks comprised of just piano and vocals, providing a restrained sound that demonstrates the versatility of the group. This will be followed up in the fall of 2008 by a remix EP featuring contributions from Alexis Taylor (Hot Chip), Spring Heel Jack, Brian DeGraw (Gang Gang Dance), and Atlas Sound.
The band split at the end of 2011.