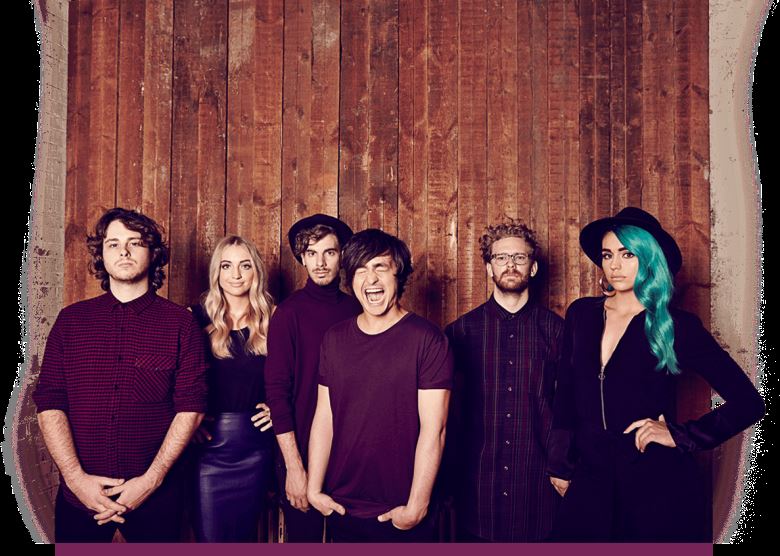 It’s the stuff of teenage dreams: one minute you’re writing songs in your parents’ front room, the next you’re knocking Pharrell Williams’ Happy off the number one slot. Sheppard's international hit single Geronimo was the Brisbane band's battle-cry, a super-sophisticated stadium pop anthem shot through with all the mixed emotions of being young. Now the multi-platinum indie six-piece, formed around siblings George, Amy and Emma Sheppard, are launching their debut album Bombs Away on the world - and what a fast, strange journey it’s been.
The Sheppard story starts two and half thousand miles from Brisbane in the tropical Pacific paradise of Papua New Guinea, where the family moved with their lawyer father. Music was in the air from day one: while dad blasted Cat Stevens in the house to get them out of bed in the mornings, mum sent them for lessons in piano and music theory. But their biggest influence was a music teacher at their Port Moresby school, Baruka Tau-Matagu, keyboard player of the legendary Aboriginal group Yothu Yindu and top session man for the likes of Janet Jackson and Madonna. From Tau the Sheppards picked up their love of harmony, their fascination with the musical life - and their work ethic. “He’d done it the tough way,” says George. “He’d enjoyed incredible success, but he's a very humble character."
Teaching the band harmonies weren’t the only thing that Baruka helped them with; it was also through him that they first met, the Australian music industry legend, Michael Chugg who would become their manager.
It wasn’t an instant coming together though. Chugg’s initial impressions were a little bit “not my thing”, however after six months of persistent hassling from the band he agreed to give them an audition… in front of his entire staff of 40 people. However the performance went, it certainly did the trick for Chugg who took on the band immediately and they became one of the first signings for his label.
The band’s unusual childhood on Papua New Guinea can be heard in their musical DNA - a sun-drenched island vibe combined with a talent for pop hooks you’d associate with song-writing teams three times their age. But like so many bands, Sheppard came about by accident, back in Australia, in fact, when middle child Amy was studying for a music diploma and felt that one of her songs (working title *Cheese on Toast*) lacked a certain something. Brother George, then a drama student in Sydney, helped out on harmonies, and the pair realised they could write together. They added young composer and producer Jay Bovino, fresh from Sydney band Vienna Circus, and in the space of two months the trio Bovino / Sheppard / Sheppard had written 30 tracks. Brisbane musicians Michael Butler and Dean Gordon joined them on guitar and drums, with younger sister Emma on bass guitar. After trying out various producers, they finally hit upon one - Stuart Stuart of Analogue Heart Records - who let them be themselves.
"With Geronimo," says Amy, "we kind of knew it was a hit. We wrote it in about two hours - there were so many hooks, and so many more hooks we could have added and didn’t.” “Songwriting is like a puzzle," George chips in. "It’s like problem solving."
Five minutes with Sheppard and it's clear this band have a creative vision that belies their age and experience. "There aren't many pure pop acts in the world now who actually write their own songs and sing about their own lives," George says, "More often than not it's a team of six or seven writers for one hit. Sheppard is a band for people who like all that classical pop music – Fleetwood Mac, Cat Stevens and The Beatles.”
The melodic variety on Bombs Away certainly recalls the lavish constructions of classic 70s and 80s chart pop. Earthy acoustic guitar and kick drum propel these songs through surprising modulations and styles - there's snatches of southern gothic (Halfway To Hell); cool scandi-pop (This Electric Feeling) and introspective love songs (Something's Missing). The combination of euphoric melodies and emotional content make for a sound that is overwhelmingly inspirational.. This is "music for the underdog", critics have suggested, and the band are inclined to agree: "Sheppard write songs for and about the downhearted," says Jay. "There is always that element of hope."
The sight of a Camden audience belting out the words to the defiant break-up song Let Me Down Easy suggests that Sheppard know what they're doing: their pop may be perfect but their indie roots make them real and relatable. They were lucky to start out in Brisbane, they say, "the best city in Australia for breaking unsigned bands" with its intense, supportive scene.
But since they attracted the attention of UK agent Steve Strange (Eminem, Coldplay) and the legendary US talent manager Scooter Braun (Usher, Justin Bieber, Psy), the world is looking rather larger. The band will be on tour for the rest of the year. They're already recording songs for their next album in breaks between shows, at the back of the bus - singing directly into their iPhones.