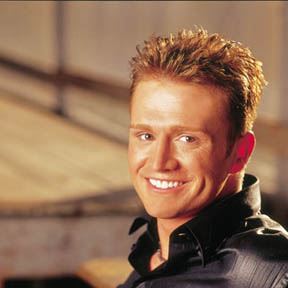 Shane McAnally has focused on two things since moving to Nashville in 1994; music and stardom. As he prepares for the release of SHANE McANALLY, his debut album on Curb Records, he is headed for just that. Not bad for someone who came to Music City with a few dreams, but no specific plan. ''I started working at a restaurant as a bartender,'' Shane recalls. ''I figured it was a job that would enable me to have time to meet with writers and make contacts.'' Along with a strong voice and a passionate heart, he brought with him far reaching talent and the drive to succeed. Now, according to Billboard magazine, ''McAnally is an entity poised to win over radio and the masses.''
In a review of his debut single, ''Say Anything,'' Billboard magazine praised the newcomer citing, ''It's a strong debut that displays McAnally's gifts as both a writer and vocalist.'' Billboard calls ''Are Your Eyes Still Blue,'' an appealing uptempo number... production is crisp and flatters McAnally's energetic performance... his voice perfectly conveys the sense of longing and resignation in the lyric.'' Of the most recent single, ''Run Away,'' radio veteran Tim Closson claims, ''Shane has created his own category.'' Now, with his long anticipated debut album, SHANE McANALLY due in stores October 24, he is ready to do just that.
McAnally began performing at the age of 12 and started writing songs when he was 6. By age 15, he was a featured performer at the Texans Theater in Branson, Missouri. After his run at the theater, he went back to Texas where he performed at the Johnny High Music Review, as well as at various festivals. ''It's hard to imagine a time when music didn't encompass some part of my day. As a kid, I was always singing,'' he remembers.
As Shane began to prepare for the future, it was hard for him to foresee music being a tangible career choice. However, he realized while studying accounting at the University of Texas at Austin that music was his passion, and he had to give it his all. ''One day at the end of my second semester I was in a chemistry class and, instead of taking notes, I found myself writing a song,'' he admits. ''Music is always something I have had a knack for and have truly enjoyed.''
Soon after his arrival in Nashville and a lucky break on the famed Bluebird stage, Shane met with Curb Music Publishing. There, he was provided with the encouragement to work on the craft of songwriting and introduced to Rich Herring, a singer/songwriter who wanted to produce. Herring and McAnally collaborated on the demo of Shane's song, ''Just One Touch.'' It was an unforgettable experience for him. ''Rich would put a guitar track down, I sang to it, then he produced around it. When he came to me with the finished song, I could not believe what I heard! It was exactly what I had dreamed of.''
Ultimately, a year later, that demo landed Shane a producer, a publishing deal and a recording contract. He began co-writing with Herring, as well as other songwriters. Shane found that collaborating allowed him to really stretch himself as a songwriter and to hone in on his musical style. McAnally prides himself on writing detailed songs about real situations. He is influenced by the vocals of Marty Robbins, Ronnie Milsap, and The Judds, as well as the entertaining style of Barbara Mandrell. ''The way the crowd would respond to those artists and the connection they had with their audiences
'' I want to do what they did,'' says McAnally. ''It's an extremely dramatic process,'' McAnally says of his musical evolution.
Along with Rich Herring, famed producer Brian Ahern (Emmylou Harris, Anne Murray) and Mark Bright are also part of Shane's musical team. ''He's a musical genius,'' says Shane of Ahern. ''He's very earthy and raw, just what I wanted. He took the time to say 'What do you want to do?' The sides we cut with Brian and Rich are amazing! It's not because of my vocals or because of the songs. It's because of the combination we all brought to the record.''
# # #