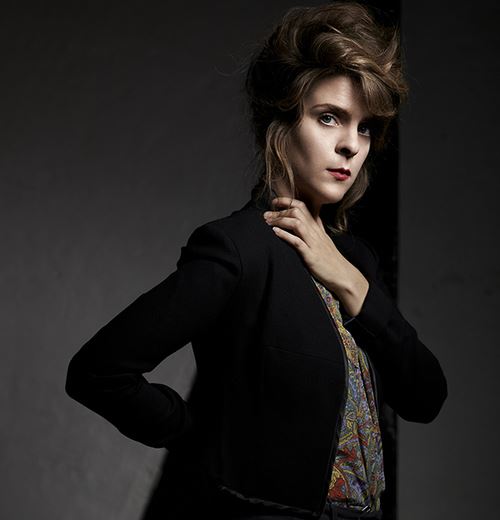 In 2007 Serafina released a 7" single and an album entitled Cheap Demo Bad Science on Static Caravan records. Some were recorded and produced in collaboration with Mike Lindsay of folktronica band Tunng, some tracks were recorded with Kristian Robinson aka Capitol K. The album opens with a cover version of Brian Eno's "By This River" but all other songs are her own.
In 2010 'change is good change is good' was released, again on Static Caravan. Described by Jarvis Cockeras one of his favourite albums of the year and well 'worth a listen', this album had struggled into existence as Serafina's harp was stolen whilst having been left, irresponsibly, in her clapped out old Toyota overnight. With some recordings made before the theft, Benge aka 'the synth king', offered up his unique collection of analogue synthesizers to fill in the harp shaped holes. Patrick Wolf described the album in Guardian.co.ukas if 'Stereolab and Shirley Collins made an album together about the trials of 21st-century romance.'
In 2011, Serafina recorded 'Bloody Hell' EP with Paul Jones of Stolen Recordings. The EP features two songs from CIGCIG and two new songs and includes the art work of Polly Huggett and RWM Hunt. These totally exposed 'live' harp and voice recordings were intended as a watermark, after months without an instrument and then with a new make of harp.
A live recording of her playing songs from her album and an interview discussing comparisons to Joanna Newsom can be seen on the BBC website.[1]
Serafina studied Classical Harp, at Chetham's School of Music with Eira Lynn Jones and went on to study with Imogen Barford and Gabriella Dall'Olio, gaining a First Class Honours degree in Music from Trinity College of Music, London, where she was awarded the String Faculty Silver Medal.
During this time Serafina began developing her song writing and this has become her primary interest.
[edit] Collaborations
Serafina has also appeared both live and on record with other musicians including Patrick Wolf, Tunng, Capitol K, Cibelle, The Memory Band, Balearic Folk Orchestra, James Yorkston, Adem,Chrome Hoof, Leafcutter John, Simon Bookish, Seb Rochford and Shimmy Rivers and and Canal. She has also worked with Jarvis Cocker and Bat for Lashes
She has also been known to perform with her brother Sam Steer who did the animation for amongst others, the music video to her song "Tiger" in his room in Camberwell. Branchage Film Festival, Jersey recently commissioned Serafina to compose a live soundtrack to a film of her choosing. The result with help of PRS 'Women Make Music' funding will be Serafina and Sam's psychedelic harp and stop motion animationed response to Kenneth Anger's 'Rabbit's Moon'called 'Postman's Familiar'.
In 2010 and 2011 she joined John Foxx And The Maths for several single live concerts in London playing analogue synthesizers and bass guitar.
Discography
EPs
* Bloody Hell, 2011, Stolen Recordings
* Japan Tour EP, 2006, Static Caravan
Albums
* Cheap Demo Bad Science, 2007, Static Caravan
* "Change Is Good, Change Is Good", 2010, Static Caravan
Singles
* "Peach Heart" / "Mano E Mano", 2007, Static Caravan
Compilations
* The Ground Bellow Me (Capitol K version of "Seven Bridge"), 2006 from Utrophia 03 Utrophia
* Cheap Demo Bad Science ("They Came From The Stars, I Saw Them" version) 2007, 93 Free CDs
* Uncomfortable (Capitol K version), 2007, Stolen Comp, Stolen Recordings