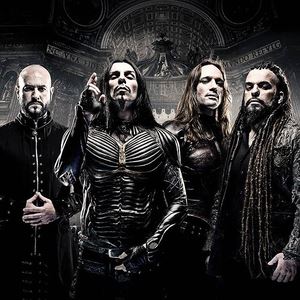 Septicflesh (formerly Septic Flesh) is a Symphonic Death Metal/Gothic Death Metal Band were formed in Athens, March, 1990 by Sotiris Vayenas (guitar), Spiros Antoniou (bass and vocals), and Christos Antoniou (guitars), and quickly released a debut EP, Temple of the Lost Race in December, 1991. The band recorded their first full-length album Mystic Places of Dawn, in April 1994 at the Storm studio with the co-production of Magus Wampyr Daoloth (who previously was the Rotting Christ keyboardist).
From the band's formation in 1991 until 1997, the line-up was stable, but on The Ophidian Wheel (1997) and A Fallen Temple (1998) a female vocalist, Natalie Rassoulis, was added. The group split up in October 2003, and after the breakup, its members moved on to different or existing projects: Chris Antoniou continued involvement with Chaostar, which he formed in 1998, and Katsionis played guitar for Nightfall and keyboards for Firewind. The DevilWorx formed a year after Septic Flesh's disbanding, and featured some members from Septic Flesh's original line-up. In March 2007, guitarist Sotiris Vayenas revealed his plans for a new solo project called Aenaos.
On February 19, 2007, Septic Flesh announced a reunion for Greece's Metal Healing Festival featuring Orphaned Land, Rage and Aborted, set to take place July 20–22. On April 3, 2007, Blabbermouth.net reported the band reunited for a seventh full-length CD, for French record label Season of Mist. According to guitarist and composer Christos Antoniou, the release would feature a full orchestra and a choir, totalling 80 musicians and 32 singers. Septic Flesh finalized the new album, Communion, in Studio Fredman in Sweden; it was released in April 2008. By this time the band had changed its name from Septic Flesh to Septicflesh. According to guitarist Christos it looks better and states a new phase in the band.
On September 10, 2009, the band announced that they had begun work on a new studio album, tentatively planned for release in the beginning of 2011. On December 17, 2010, the band released the first single from the new batch of material titled "The Vampire From Nazareth" and announced that the new album will ship April 28 in the UK, and April 29 In the USA. On February 12, 2014, the band released details about their new album entitled 'Titan'. The album was released on the 20th of June 2014 to mostly positive reviews.
Discography:
Forgotten Path (1991, Demo Tape)
Temple Of Lost Race (1991, LP)
Mystic Places of Dawn (1994, CD/Pic-LP on Holy Rec.)
Esoptron (1995, CD on Holy Rec.)
Ophidian Wheel (1997, CD on Holy Rec.)
A Fallen Temple (1998, CD on Holy Rec.)
Forgotten Paths (The Early Days) (1999, Compilation on Black Lotus Rec.)
Revolution DNA (1999, CD on Holy Rec.)
Sumerian Demons (2003, CD on Hammerheart Rec.)
Communion (2008, CD on Season Of Mist Rec.)
The Vampire from Nazareth (2010, Single on Season Of Mist Rec.)
The Great Mass (2011, CD on Season Of Mist Rec.)
-
Spiros Antoniou Bass, Vocals (harsh) (1990-2003, 2007-present)
See also: ex-Chaostar, ex-Thou Art Lord, ex-Obsecration (live)