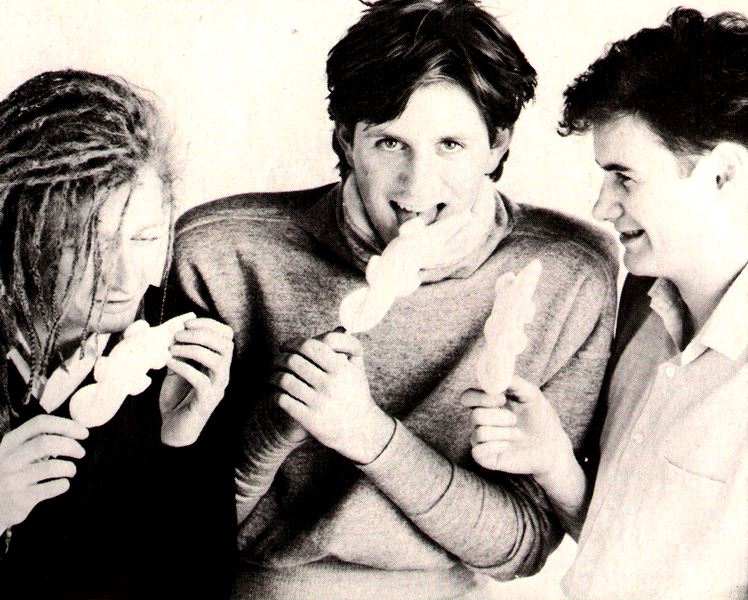 Scritti Politti is a musical group that was formed in 1977 in Leeds, England, being primarily a vehicle for singer-songwriter Green Gartside (born Paul Julian Strohmeyer on 22 June 1956, Cardiff, Wales). Initially a left-wing-inspired post-punk rock act, the band developed into a more new wave and mainstream pop based project in the early to mid-80s (following two heavy lineup changes). The group's most successful album, 1985's 'Cupid & Psyche 85', proved innovative in its early use of the techniques of sampling and MIDI sequencing, also producing hit singles such as "Perfect Way", "The Word Girl", "Wood Beez", and "Absolute".
Released on the Rough Trade record label in 1981, "The Sweetest Girl" (also known as "Sweetest Girl") became Scritti Politti's first song to be a hit, peaking at #64 on the U.K. singles chart. According to the The Sweetest Girl Songfacts, was cited by The New York Times as one of the ten best singles of the year. Scritti Politti went on to enjoy significant success in the music charts in the U.K. and U.S. as the decade went on, rivaling slick new wave contemporaries such as Duran Duran, The Human League, Simple Minds, and others.
Following this period of fame, however, Gartside became disillusioned with the music industry and the related pressures of being an artist. He retired to the South Wales of his childhood for nearly a decade. He returned to music-making in the late 90s, releasing two critically-acclaimed albums (in 1999 and 2006). As well, the success of the 2006 Mercury Music Prize-nominated 'White Bread Black Beer' release proved to be a major comeback for Gartside. He toured the U.K., Ireland, the U.S.A., and Japan in the same year, these efforts being his first time performing live on stage for about twenty-five years.
Gartside is known for his distinctive, whispering vocal style; he was described by one critic as having "a voice that's eternally 14 years old". Born in Cardiff in 1956, Gartside attended Leeds Polytechnic and experienced the Sex Pistols' infamous 'Anarchy tour' in 1977. Like so many others who saw this musical and cultural car crash, he felt inspired to make music. As well, again like so many others, he swiftly became disillusioned with punk's stylistic parameters of the time. Following years of work evolving Scritti Politti's sound, the group's debut studio album, titled 'Songs to Remember', came out on 3 September 1982. Though not a commercial hit, the relase's eccentric set of influences,including 60s pop rock and 70s soul, and many philosophical lyrical references, with Gartside avoiding direct left-wing preaching in favour of confessional storytelling, brought the band serious critical praise.
In 1989, the British music magazine 'Record Mirror' placed 'Songs to Remember' at number fourteen in their critics' list of the best albums of the 80s. Nonetheless, heavy line-up changes occured after that album's release. When 1985's 'Cupid & Psyche 85' came out, that work proved both to be a commercial smash as well as to be innovative in terms its early use of the techniques of sampling and MIDI sequencing. Hit singles such as "Perfect Way", "The Word Girl", "Wood Beez", and "Absolute" brought the group legions of fans.
As stated before, Scritti Politti is known for being, at times, a commercially-friendly outfit, particularly during when Gartside worked with American producer and keyboard player David Gamson and drummer Fred Maher, yet its songs still retained a critically acclaimed, heavily poetic look on life (a factor which, no matter what sound or guise Gartside's current band may adopt, has always been carried through).
In a recent BBC Radio 2 interview, Gartside enthusiastically stated that he will be working on two further albums in the future, one being hip-hop based (a la 1999's Anomie & Bonhomie).
Recently, Gartside has been performing live with Alexis Taylor of Hot Chip - a fellow Mercury Music Prize nominee - and it is rumoured that the pair are currently writing a joint album.